TYSON FURY has unleashed a furious rant to fellow heavyweight boxer Deontay Wilder, after the Bronze Bomber claimed he could beat a young Mike Tyson.

The 29-year-old returned to boxing after almost three years out, cruising a win against Sefer Seferi.

And now he has issued a stern warning to the current WBC heavyweight champion. 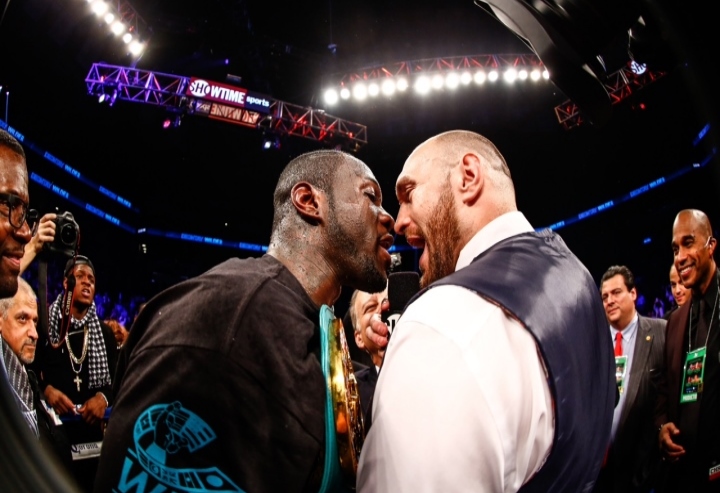 Taking to his Instagram, Fury said: "I just heard Deontay Wilder said he would destroy a young Mike Tyson.

"You’re a dreamer, you are honestly. I’ve never seen a man dream so much in my life.

"I don’t know why you're taking the great Mike Tyson’s name in vain really.

"You keep mentioning him but he’s not even in your era. But however there is another Tyson in your era and I’ll stop you in five rounds you bum.

"You big lanky, skinny-legged dosser, you chinless bum. I’ll put my fist right through you.”

Fury is currently getting ready for his second comeback fight on August 14 as part of the Carl Frampton Windsor Park stadium show in Belfast.

Meanwhile, Wilder has his own fights to sort out, with rumours of a fight with Anthony Joshua for all four of the major belts on the cards.

But we may see the Watford-born star going toe-to-toe with Russian Alexander Povetkin first.

[QUOTE=JcLazyX210;18892421]Too much time on your hands. You should be on the car lot right now trying to make some sales. Lol[/QUOTE] Go sniff some Jordans and jack off

[QUOTE=Boxing Goat;18890569]No, you just [email protected] up a quote.....but you sell houses huh Al Bundy lol[/QUOTE] You got too much time on your hands Mr used car salesmen.

[QUOTE=Boxing Goat;18890564]I have 8 cars and [email protected] Jordan and a pair of shoes and any moron who would pay that much for them like an idiot. Surprised you can sell anything considering what a dumb [email protected] you are[/QUOTE] Wow you…