Tyson Fury Shredding Off The Pounds as Return Nears - Photo

By Charlotte Ikonen, courtesy of The Daily Star

Tyson Fury has transformed his body in a matter of months as he closes in on a return to the ring.

The self-proclaimed Gypsy King has dropped around eight stone [112-pounds] with the help of new trainer Ben Davison.

Fury, 29, who has been out of action for more than two years, will make his comeback at the Manchester Arena on June 9. 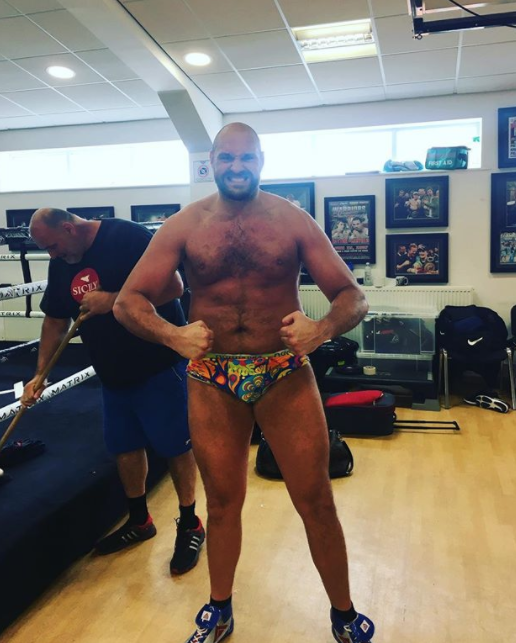 The former heavyweight champion showed off his incredible weight loss as he tensed his muscles while wearing a skimpy pair of pants.

He uploaded the picture to his Instagram page, captioned: "4 weeks on Saturday & counting down the days.

As compliments flooded in on the photo, Fury treated his 615,000 followers to another.

He captioned it: "Here's another 1 just to keep y'all going @myoddballs for support of testicular cancer."

Fury appeared in high spirits despite recently admitting that he had been left with a blood clot in his throat after being punched in training.

But the brawler admitted that he will not get it removed as it is "quite sexy".

The star has not fought since he dethroned Wladimir Klitschko in November 2015 to become the heavyweight champion of the world.

His opponent for his bout next month is yet to be confirmed.

Fury's new promoter Frank Warren, who he has signed a lucrative multi-fight deal with, is set to announce the first opponent of his second coming soon.

It is expected to be someone of modest ability as Fury looks to get rid of any ring rust that has gathered over the two-and-a-half years of inactivity.

The Manchester giant has more than prepared for whoever will be put in front of him and seems to be in peak condition after months of hard training.

He recently said next month's fight will launch a bum-a-month campaign invoking the legacy of legendary heavyweight Joe Louis.

[QUOTE=EnglishOxide;18755240]It's called ketosis. Look it up. Fundamentally, it changes your body to use slower burning fat for energy instead of sugars (carbs) for quick burning energy. Basically, eat less than 5g carbs a day, no sugars and very little unsaturated…

What a sexy and desirable man fury is now. Similar to haye. But just wondering if his first comeback fight will be a scheduled 6 or are they 8 rounders?

[QUOTE=vitali1999;18755254]If he's as good as he claims then he should not fight for another year and a half and his first fight be against a major belt holder, Ie. Joshua or wilder and he knocks them out. Vitali Klitschko did…