Tyson Fury is still favoring Andy Ruiz to come out on top, when he defends his IBF, IBO, WBA, WBO world heavyweight titles against Anthony Joshua on December 7th.

The rematch is taking place in the unexpected location of Diriyah in Saudi Arabia.

Back in June, at Madison Square Garden in New York City, Ruiz captured the heavyweight crown by dropping Joshua four times before the contest was waved off in the seventh round. 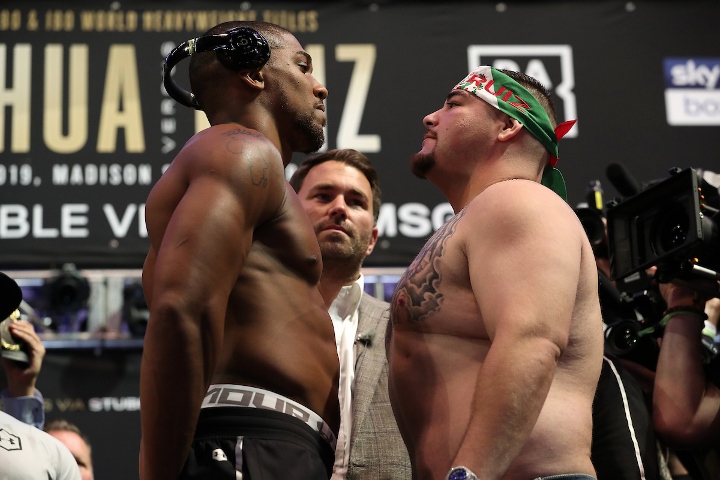 In the opinion of Fury, the very hot climate and unfamiliar surroundings of Saudi Arabia will favor Ruiz in the contest.

Ruiz reside in Los Angeles, California - where the climate does get hot and it rarely gets very cold. While Joshua lives in the more seasonal location of London.

Also, Fury gives Ruiz the edge when it comes to the mental aspect of the fight - with Joshua suffering his first career defeat via stoppage.

"It's a bizarre location in Saudi Arabia and the heat might affect both fighters," Fury told Business Insider.

"If anything, Andy Ruiz might be more used to the heat because he's Mexican and lives in California. It's always hot there whereas Joshua lives in London and it's not always hot there. He's already been knocked out, so that favors Ruiz. I think fighting fire with fire with someone who is quicker than you and puts better shots together is a disaster. I don't really see the fight going any differently unless AJ comes out and boxes on his toes, which we know he can't do."

And Fury was more than happy to explain the difference between himself and Joshua.

"The difference is I travel all around the world, do what I've got to do, and I'm good at my job. That's it."

[QUOTE=juggernaut666;20026814]Fury doesn't need Joshua to lose,he will simply demand 60% again. Not hard at all to duck Joshua both Fury and team Wilder have mastered it.[/QUOTE] Of the 2, I'd say Wilder would be more willing to take on AJ.…

[QUOTE=Curtis Harper;20021092]Fury is so desperate for AJ to lose again so he won't have to face him.[/QUOTE] Fury doesn't need Joshua to lose,he will simply demand 60% again. Not hard at all to duck Joshua both Fury and team Wilder…

Fury is so desperate for AJ to lose again so he won't have to face him.

If Fury and Ruiz fight, I'm sure he will roast the ever living shot out of him for being a Mexican before American

Once again Fury is trying to stay relevant by talking about AJ. I swear he sounds like a bitter ex. And most of you idiots are lapping it up because you hate AJ so much that you will parrot whatever…