Tyson Fury, blood gushing from two nasty cuts around his right eye, gritted his teeth and fought back.

A fighting man was in a real fight. Against Otto Wallin, the unheralded but proud Swede, he had to dig far deeper than many anticipated but he came through a stiff test, absorbed a huge 12th round shot and just about stayed on track for a second crack at Deontay Wilder’s WBC heavyweight title.

It wasn’t easy for Fury at the T-Mobile Arena in Las Vegas, far from it.

But it was a good value scrap and entertaining.

In one way or another, almost everyone’s stock went up.

Fury was involved in another fun fight, laced with yet more drama. Wallin is a far more marketable commodity and merits another big opportunity having well navigated a huge jump in class and his trainer, Joey Gamache, has also come out of it with aplomb, being able to motivate, reassure and guide his charge through not just a big night but a long and taxing fight week – Wallin’s first exposure under boxing’s brightest lights.

Arguably the man who’s come out of it worst is Fury’s under-fire trainer Ben Davison. He’s become a social media whipping boy, a charge lead by Fury’s dad, John, who called for a complete overhaul of the team.

Talk about you’re only as good as you last fight.

Without Ben, make no mistake, there would have been no Tyson Fury comeback in the first place.

It wasn’t that long ago that Ben was being heralded as one of boxing’s bright young stars having brought Tyson back from the precipice to within a whisker of Wilder’s WBC strap.

There are some awfully short memories. 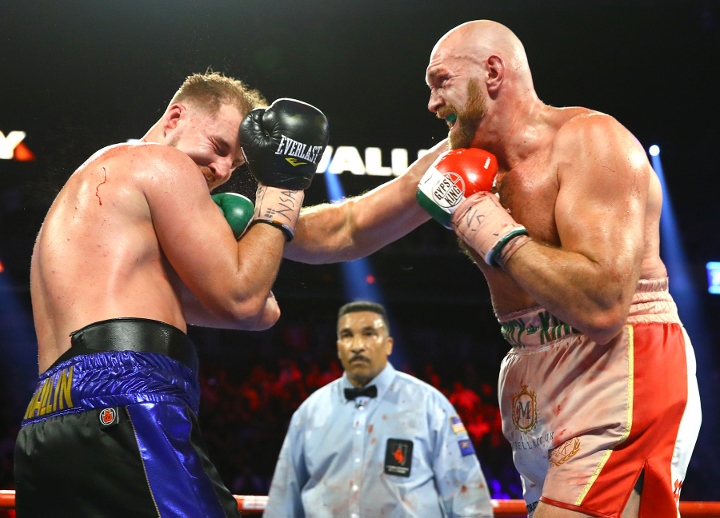 Some contend Davison has taken Fury as far as he can, which seems like lunacy given so many believe Tyson’s wardrobe should presently include a green and gold belt he deserved a decision for but didn’t get.

The fight was changed irrevocably by the third-round cuts. While Tyson fought through them when they were clearly bothering him. Why wouldn’t they. They took 47 stitches to seal and had he not been covered by his own insurance would have cost him around $20,000 in medical fees to repair.

He blinked. He dabbed at the cut. He fought back.

Tyson always has had the appetite for a fight. There was never any doubt that he would want to keep going through the crimson haze. It was a matter of whether Tony Weeks and the ringside doctor would allow him.

And when Wallin scraped his glove in the wound as a round ended, Tyson showed out, but he’d have probably done the same thing in reverse. As Ricky Hatton would say, “It’s not tiddlywinks.”

But this ‘only as good as your last fight’ rubbish needs to stop. Maybe Fury should have done better but he did what he could with a fight he might not have been fired up for and then he got over the line with a severe handicap. That’s not simply trying to assess the positives of one night, it’s an assessment of the criteria that one contest doesn’t make a career the way one swallow doesn’t make a summer. If that was the case, what was Ali against Doug Jones? What was Duran against Kirkland Laing? What was Mayweather against Emanuel Augustus? There’s no shame in being pushed. You might point to the fast-talking, big-mouth antics and require actions to back up words, but you need to talk the talk to stand out from the crowd. How much did Fury make for Saturday night, and what does Vasyl Lomachenko make?

And Fury is not just brash, he puts on a show. The red, white and green colours were vibrant all week as he paid tribute to Mexican Independence Day weekend and he entered the arena to a tremendous ovation and Mexican music.

Some even put that down as a cynical cash grab.

All too often there’s negativity in boxing, some kind of backlash to be had, someone’s in the crosshairs.

Saturday night was supposed to be an exhibition. Wallin had been written off. Fury – who while he has committed some cardinal sins in the past seems like a new man who has outgrown some bad ways – was supposed to be dominant and line up the Wilder rematch in February.

It didn’t happen. What did happen was better than that. We had a real fight. We had a good crowd. Tyson got cut. He got rounds. Wallin did well and the vast majority were entertained. Shouldn’t we just be happy, for once?

Good article. Let's just enjoy the entertainment that boxing provides. Life's too short to get whipped into a frenzy and find every negative thing (real or imagined) because it doesn't fit your narrative for cheerleading.

[QUOTE=1hourRun;20066108]You been doing more crying then celebrating over this 'win' denium, I wonder why? Otto Wallin whooped that ass. Stay mad.[/QUOTE] Only ret@rded Wildertards like yourself believe that. Stay deluded, clown.

[QUOTE=denium;20066086]I'm looking forward to seeing you disappear again when Fury beats Wilder......again. GTFOH coward.[/QUOTE] You been doing more crying then celebrating over this 'win' denium, I wonder why? Otto Wallin whooped that ass. Stay mad.

[QUOTE=1hourRun;20065962]I know I'm happy. The Gypsy-Bum got what he had coming.[/QUOTE] I'm looking forward to seeing you disappear again when Fury beats Wilder......again. GTFOH coward.

Lol... WTF did I just waste time reading? You can hop in the Delorean but clearly you forgot the MIB memory eraser. Tris Dixon thank GOD you aren’t a referee or more importantly a judge. Let me try to make…