Tyson Fury: It's an Honor To Fight on Mexican Independence Day

MGM Grand, Las Vegas, NV - Tyson Fury (28-0-1) was in a jovial mood when he arrived to his public workout on Tuesday.  The 6'9" lineal heavyweight champion made his arrival with a Mexican luchador mask on that are worn by professional Mexican wrestlers.

He was also accompanied by the flag of Mexico and mariachi music as he paid homage to Mexican Independence Day which takes place on September 16th.

On Saturday he faces Otto Wallin at the T-Mobile Arena on the Las Vegas strip.  WBO super bantamweight champion Emanuel Navarette (28-1) faces Juan Miguel Elorde (28-1) in the co-feature bout.  The entire card will be streamed live on the ESPN+ App. 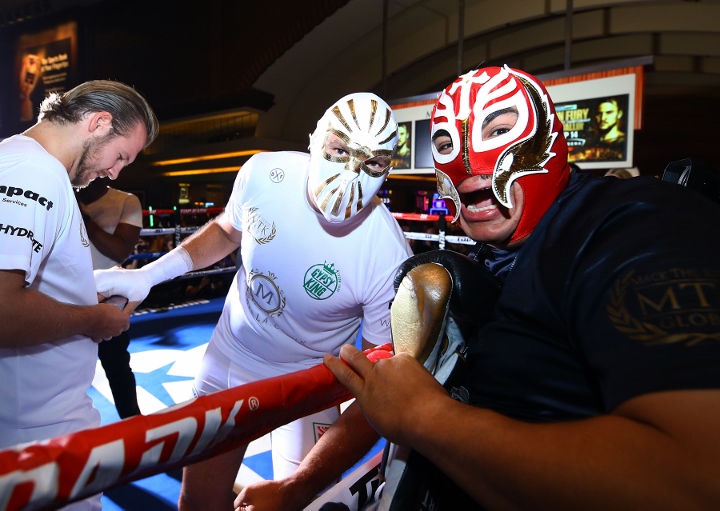 The 31-year-old Fury said that he has a lot of respect for the Mexican community and said that he is honored to fight on the date that in recent years has been occupied by Canelo Alvarez and prior to that to fighters such as Julio Cesar Chavez and Oscar De La Hoya.

"100%. It is Mexican Independence Day weekend. I have Mexicans as part of my training team. There is a lot of honor and respect in fighting on this date," Fury told the press after his training session.

While a formal title will not be at stake, WBC President Mauricio Sulaiman said that he will have a "Mayan" belt on the line.  In recent years Sulaiman has had belts made by different indigenous groups in Mexico create a belt for some of the biggest fights of the year.  The belts aren't real championships but are designed to emulate the Mexican fighting spirit.

"It is a beautiful moment for me to be the first non Mexican to ever fight for the WBC Mayan belt. That is a very big honor for me also. I am going to change my name for the weekend to El Rey Gitano," said Fury.  El Rey Gitano is Fury's nickname, "The Gypsy King" in Spanish.

When asked who his favorite Mexican fighter of all time is, he responded by saying, "Chavez. He was just a great entertainer and a great personality."

[QUOTE=Marchegiano;20054618]School me on some posture/position fighting and how it is meant to be scored. [/QUOTE] [QUOTE=PunchyPotorff;20056414] Bottom line is this: Fury can box the ears off ANY top HW. And you can't argue with that. I'm not wasting any more…

Quote: Originally Posted by PunchyPotorff Oh look folks... yet another Fury hater... complete with ancient history speak from 100+ years ago. Sure must be a hard pill to swallow that Fury beat the division boogyman, and only standard boxing 'politics'…

[QUOTE=LoadedWraps;20054272][COLOR="Red"][FONT="Comic Sans MS"]Fury gave Wilder a boxing lesson. Wilder better show he can hurt Fury again in the rematch because this time Fury is going to put his head in Wilders chest and make his insides jelly with sledgehammers to…

[QUOTE=PunchyPotorff;20053622]Quote: Originally Posted by PunchyPotorff Oh look folks... yet another Fury hater... complete with ancient history speak from 100+ years ago. Sure must be a hard pill to swallow that Fury beat the division boogyman, and only standard boxing 'politics'…