Tyson Fury: I Only Need One Hand To Beat Andy Ruiz!

Back in June at Madison Square Garden in New York City, Ruiz capture his four belts when he dropped Anthony Joshua four times to secure a seventh round stoppage.

A rematch between Ruiz and Joshua is tabbed for December 7th, in Saudi Arabia. 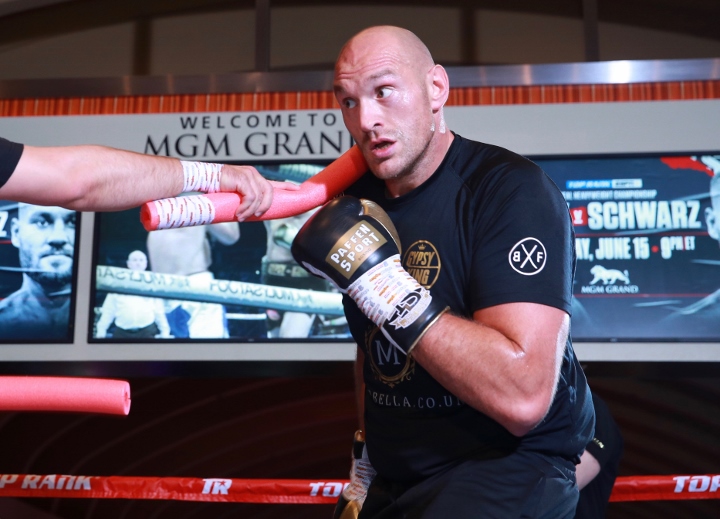 Fury believes that he would easily defeat Ruiz - if the fight came together.

"Listen, we never know what's going to happen in life and I can never say no to anything. But one thing I will say is, I will let the fans decide, which hand I put behind my back and beat Ruiz with the other hand - because I only need one hand for him," Fury told TMZ Sports.

On the other hand, Fury has also picked Ruiz to win the rematch with Joshua.

Fury resumed his run back in June, when he stopped overmatched Tom Schwarz in two rounds. He's scheduled to return to action on September 14, at the T-Mobile Arena in Las Vegas, when he faces unbeaten Swede Otto Wallin.

Should Fury come away with the win, he claims a deal is complete for a rematch with WBC world champion Deontay Wilder on a date in February. Wilder will also have to come away with win, when he faces Luis Ortiz in a planned November rematch.

Wilder and Fury fought to a controversial draw back in December 2018 at Staples Center in Los Angeles. A planned rematch fell apart earlier this year, when Fury signed a co-promotional contract with Top Rank and ESPN. Wilder is under contract with Premier Boxing Champions, who have content deals with Showtime and Fox Sports.

[QUOTE=Squ□redCircle34;20006027]You’re nuts if you think Fury won’t be touched up again! Wilder noticed albeit a bit late that Fury was doing the same herky jerky move with his head and then he’ll step to the side and that’s when Wilder…

Really? Then nhy are you fights no-name safety bums?

I liked Fury's talk when he was taking real fights but this bytch is just yapping now while avoiding anyone with a pulse. Not a good look. Talk when you get your balls back.

[QUOTE=DuckAdonis;20004537]Who says Wilder lands a miracle shot like that again? I think it's more likely that he doesnt[/QUOTE] You’re nuts if you think Fury won’t be touched up again! Wilder noticed albeit a bit late that Fury was doing the…

[QUOTE=SinderellaMan;20005173]That's spot on. Ruiz would have to smother and commit to the body for the 1st 6 rounds. But since my last post, I saw a Fury video with Ben & he is looking ferocious. His foot movement is back,…