On Saturday night in Scotland, Indongo continued his run of success by dominating Ricky Burns over twelve rounds to add the World Boxing Association (WBA) world title to his growing collection of belts. 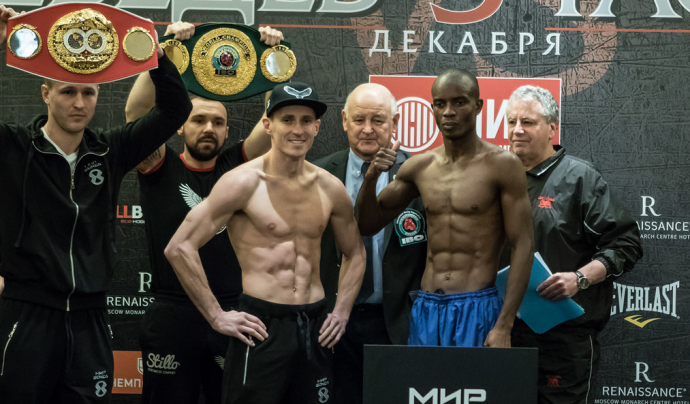 Right now Indongo has a mandatory defense due, at least under the IBF, to Sergey Lipinets.

Troyanovsky has been out of the ring since the December loss. After Saturday's fight, the boxer has instructed his promoter, Andrei Ryabinsky of World of Boxing, to begin negotiations for a rematch with Indongo.

The Russian former champ is expecting to get back in the ring in July.

If Indongo does not grant him a voluntary shot at the belts, then he plans to fight his way to a mandatory position that forces Indongo to fight him again. Troyanovsky hopes the rematch can take place in the fall.

"There are no thoughts of retirement, definitely not. I would have liked to have a championship fight in July, but unfortunately no one will give me a shot so therefore I will have to go through the usual steps to secure this - to get the status of mandatory challenger. We will try to negotiate with Indongo for a rematch in the fall. If he agrees to do a voluntary defense - it would be cool. But if he does not agree, then I will secure the status of mandatory challenger and go after these championship belts because without them it just doesn't make sense to box. It is necessary to go for the world title," said Troyanovsky to Margarita Yakupova.

"In July, there will be a night of boxing and my next fight is being planned on this date. The opponent is not yet determine. I think,in the near future it will be disclosed, and then we will begin working in late April. I have not yet started training.... but the desire to box is with me more than ever before, so I can not wait to start training and finally get back in the ring to fight again."

[QUOTE=Eff Pandas;17599198]Troya is the perfect example of what I'm always saying about things being able to change on a dime in boxing. Troya was the pretty clear #2 guy at 140 & now he's back in squirrel trying to get…

Troya is the perfect example of what I'm always saying about things being able to change on a dime in boxing. Troya was the pretty clear #2 guy at 140 & now he's back in squirrel trying to get a…

Indongo is busy with a lot of other options, Troyanovsky needs to win a couple fights, then he can make a claim at revenge against Indongo. Fight Shakhnazaryan again, that was a good fight the first time

The look on Ryabinsky's face right after Troya got smashed was priceless! Ryabinsky has been taking a lot of L's recently.

[QUOTE=NaijaD;17598169]You just know that had he beaten Indongo, the usual suspects would have started beating the "Crawford is ducking" drums.[/QUOTE] They were saying that before the Indongo fight tho :lol1: