Trainer: No Matter What, Jose Ramirez Will Train Hard And Stay Ready

Jose Ramirez and his team continue to prepare responsibly for any given scenario.

The unbeaten, unified 140-pound titlist is one of the few athletes with a major fight on the current boxing schedule, despite the growing concern that his forthcoming title defense versus former champ Viktor Postol won’t see the light of day. The two are due to collide May 9 in Fresno, California—roughly an hour from his Avenal hometown—which for now is just outside the batch of events to have been postponed in the wake of the coronavirus disease (COVID-19) pandemic.

“Jose is very patient. He doesn’t frustrate himself or let things get to him,” Robert Garcia, Ramirez’s head trainer told BoxingScene.com of his fighter’s mindset and ongoing preparation out of his home-based training complex in Riverside, California. “I’m sure deep down, he’s frustrated but he never shows it, he never brings that to the gym. We already had a full camp for this fight (originally scheduled for February 1) and we’re all just anticipating that phone call to tell us it’s going to be postponed a second time.

“In the meantime, Jose will continue stay ready as if the fight is still happening, just like I’m sure (Postol) is doing the same thing.” 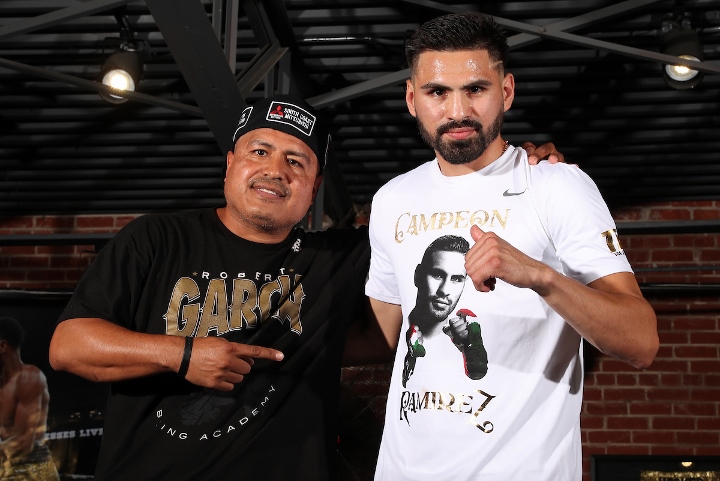 The two were originally scheduled to fight on the eve of Super Bowl LII, live on ESPN from Mission Hills Resort Haikou in Haikou, China. Those plans were scrapped roughly a week before the fight date, during which at the time were the early stages of COVID-19 and limited to China at the time.

The disease has since spread worldwide, resulting in a number of boxing shows postponed or canceled outright. Some promoters have secured rescheduled fight dates, in hopes that the sport—and the free world—is able to resume to a sense of normalcy by then.

Others have taken a wait-and-see approach, as to not build up false hope only to be let down by more delays.

With the bout barely six weeks out, Ramirez (25-0, 17KOs) remains in a peculiar predicament. Continuing to train for a fight that might not happen as scheduled—for the second time in three months—is less concerning than the sacrifice he continues to make as the world remains on edge.

“It’s not easy for Jose, or anyone who has to be away from their loved ones while all of this is going on,” notes Garcia. “This is boxing, so we’re used to fights getting postponed, some getting cancelled. We’ve already experienced with this fight supposed to (have) happened earlier this year.  But Jose, he’s out here training and staying in Riverside dedicated as always.

“His family is (four hours away), with everything happening I’m sure there are thoughts running through his head that he should be back home with his loved ones. He’s here in the gym, preparing away from home and not really having that option to leave until we’re told that the fight’s not happening. No matter what, he’s always going to train just as hard and stay ready, even if it’s to be ready for a fight that takes place another month or two later. He’s fine with whatever happens and will do whatever it takes.”

Whether on May 9 or at a later date, Ramirez will make his first defense as a unified titlist after stopping Maurice Hooker in six rounds last July to win the World Boxing Organization (WBO) title. The unbeaten 27=year old—who represented the United States in the 2012 London Olympics—claimed the World Boxing Council (WBC) strap in a 12-round win over Amir Imam in March 2018, having made three successful defenses including the aforementioned win over Hooker.

Should the May 9 date hold up, the fight could come with just the WBC title at stake. As previously reported by BoxingScene.com, the WBO has postponed all sanctioned events until June 2020.

[QUOTE=Curtis2;20486680]Yes, absolutely Jose would beat all of them...Thurman's washed up, he'd lose by TKO...Paq wouldn't be able to handle the pressure or power from Jose, Garcia is trash, Spence not the same as he was, gets KO'd...Porter would lose by…

[QUOTE=Kannabis Kid;20483630]You know this is not true dude I like JC Ramirez but he gets hit man the guys at 147 can crack not saying he can't have success because he is talented and is exciting to watch and I…