Top Contender is Accused of Hiring Hitman in Murder of Lawyer

Well-known Nicaraguan boxer, for fought for a world title on several occasions, Carlos "Chocorroncito" Buitrago (30-3-1, 17 KOs), will be charged before the courts for his alleged responsibility in the death of lawyer Harold Contreras, who was shot in the back on Saturday in the Andrés Castro neighborhood in the District III of Managua.

The lawyer died hours later in the Military Hospital of that city.

Buitrago, 26, fought unsuccessfully four times for the minimumweight world title - twice for the WBA, once for the WBO and the last time he fought for the IBF title back in December. He is scheduled to fight on March 23 in the Seminole Hard Rock Hollywood Casino, Florida. 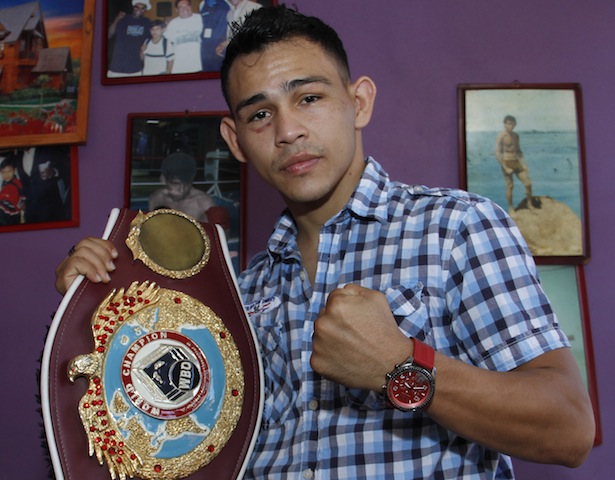 According to information published by El Nuevo Diario de Nicaragua, Buitrago and the athlete's mother are being pegged as the masterminds of the shooting death.

Carlos Chavarria, the legal representative of the victim, assures that the crime was stimulated by old arguments that Buitrago and his mother had with the deceased lawyer's mother-in-law.

Chavarria also said that "Chocorroncito" and his mother had threatened his client (Harold Contreras), and the deceased had lodged four complaints with the Supreme Court of Justice.

In the indictment filed this Friday by the Public Prosecutor before the Tenth Penal Court District of Hearing, the only suspect mentioned by the prosecution for the crime of murder to the detriment of Harold Contreras' lawyer - is Axel Afreen Quiñones, 23, who is also made called Jonny Alexander Quiñones.

According to the prosecutor's office, on March 10, lawyer Harold Contreras got out of his truck at his mother-in-law's home in the Andrés Castro neighborhood of Managua when the accused shot him in the back.

Hazel Reyes, prosecutor of the Public Ministry explained that the victim received two bullets, one caused a wound in the right kidney that damaged 70 percent of that organ.

Quiñones, who denied having committed the crime and having some link with the boxer, is being pointed out by the family of the victim as being the alleged hitman who was sent by "Chocorroncito" and his family.

"We are going to accuse (the boxer and his mother), we are asking the police to stop protecting them, to clarify things as they are. What is the message they are giving? That they can do something like this and they can remain safe on the street with impunity, that anyone can pay someone in the manner that (Quiñones) was paid to deprive my colleague's life," said Chavarría.

The family of the deceased lawyer assures that they will lodge a formal complaint against the boxer and his mother. Several lawyers in support of the victim attended the hearing held in this case.

Carlos Solís, Judge of the Tenth Criminal Court District, admitted the accusation against Quiñones and scheduled an initial hearing for this April 5. The accused will be kept in preventive detention.

Buitrago was very close with the legendary Alexis Arguello.

Curiously, Buitrago was one of the main witnesses used by those who defend the theory that the three-time world champion took his own life in 2009, as there are many who insist that it was a homicide.

Buitrago had claimed that the day before his death, Arguello had confessed his desire to end his own life.

Mom of the year here!

[QUOTE=BOLLOCKS;18578953]"Chocorroncito", they running out of nicknames in Nicaragua?[/QUOTE] They got these little baby names with the "ito" at the end to make them sound like they're little kids.

He better hope he doesn't end up in jail. His minimumweight tight little ass would get passed around and smashed every night.

Wow, that's crazy. Hope they get to the bottom of it.

surprised floyd didnt do this to eliminate his top competition