Long-time heavyweight contender and two-time title challenger Tony Thompson (40-7) reached out to BoxingScene after hearing the news that Andy Ruiz withdrew from his October 29 bout against Hughie Fury. The colorful, always entertaining Thompson discussed a potential Fury bout, a third fight with David Price, and his last bout against Luis Ortiz.   Here is what he had to say:

Thompson: I just heard Andy Ruiz pulled out against Hughie Fury. Please, let the man go have another dozen donuts in peace and give me the fight. These young heavyweights have no appreciation of what they got handed to them.  An eliminator against Baby Hughie?  Man, it don't get no better than that.

BoxingScene:  So you'd be willing to go to Manchester October 29 to face Fury?

Thompson:  I'd be willing to go and fight him in his house tomorrow.  Peter Fury can be the referee and Tyson Fury can be the judge.  Of course I would gladly whoop Baby Hughie's ass.  At 22, he's still got his umbilical cord hanging out his belly button.  I'd wrap that cord around his neck and hang him with it.  He don't know what he doing.  Maybe in 10 years he'll know what he's doing, but right know he don't know sh*t and I'd be more than happy to give Baby Hughie a diaper change on October 29. 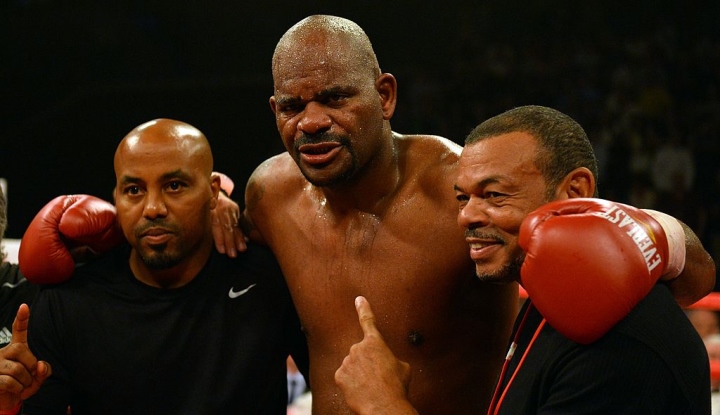 BoxingScene:   David Price has been mentioned as a potential opponent for Joseph Parker.  If  a bout with Fury doesn't materialize, would you consider a third bout against Price?

Thompson:  We been trying to make a third fight against David Price, I just don't think they want it.  I don't blame them.  I've been watching David and I think he's getting better and I wish him luck.  But he still can't beat me.  Honestly,  I'm more focused on slapping  Baby Hughie's behind and introducing him to the real world October 29.  Five weeks to get ready for a fight?  I don't know what I'd do with all that time to train.

BoxingScene:  In hindsight, would you have taken your last fight against against Luis Ortiz on such short notice?

Thompson:  I've never had the luxury like Andy Ruiz, or any of these young guys, of not taking fights because I was hurt or  because it was short notice.  If I did that, I would have never have got any big fights.  So, no I don't regret taking Ortiz on short notice.   I took that fight on like two weeks notice when HBO couldn't find no other opponents.  I went from the golf course to training camp and still went a tough six rounds.  It was only tough because I didn't have enough time to get in shape.   Bryant Jennings is a young man and had like 2-3 months to train and he only went one more round than me!  If I had 2 months to train, it would have been a totally different fight, but I don't cry over spilled milk,  Life ain't easy, and if I get the chance October 29 I will teach that lesson to Baby Hughie.

Thompson:  Thanks to all the Boxing fans out there, and I hope I get the chance to give my UK fans a special treat October 29.

"I'm just saying, if anyone has a wheelchair out there they want to donate." That guy's awesome.

Yikes... I hope they find SOMEONE to fight Hugie next month. Thompson is just going to treat this as a quick paycheck but I don't know if it's better to roll w/ him or some nobody who we've never heard…

This would be one of the worst fights ever seen on television i guarantee it. Not a bad replacement for Hughie at all, just a horrible fight aesthetically

Tony Thompson is the HW version of "the Roadwarrior." He'll go to anyone's backyard, on short notice, fight anyone and put in a showing. Make it happen! :boxing:

I would be ok with this. Team Fury was trying to match up TT with Hughie before the first David Price fight. TT is 44 but could still go a few rounds with almost any HW. I want to see…