On November 29th, 'Super' Tommy Frank aims to add the IBO Intercontinental flyweight title to the Commonwealth super-flyweight belt he already possesses. He'll battle Mexico's Martin Tecuapetla at the Ponds Forge Arena in his home town of Sheffield, live on Freesports in the UK. The undefeated contender hopes to add his name to the long list of champions from the fighting city of Sheffield. Last week the twenty-six year-old took some time out after a day's training, to give me his thoughts on various topics over the phone ahead of his November 29th fight.

Frank on his September win over Aran Dipaen and going twelve rounds for the first time:

"In all honesty, at the end of the fight, I were a little bit disappointed with my performance because I really wanted to put a show on and I think I had a bit of an off night. Looking back, I'm actually happy it turned out the way it did because I think it were a brilliant learning fight. I learned so much and gained so much. There were times where I had to really dig in and grind it out. You can't always win by knocking your opponent out or by a large points margin. Sometimes you've got to make it ugly and that's exactly what I did. Overall, I actually ticked a lot of boxes: going twelve rounds for the first time and I didn't have it going all my own way. It'll make me a better fighter in the long run." 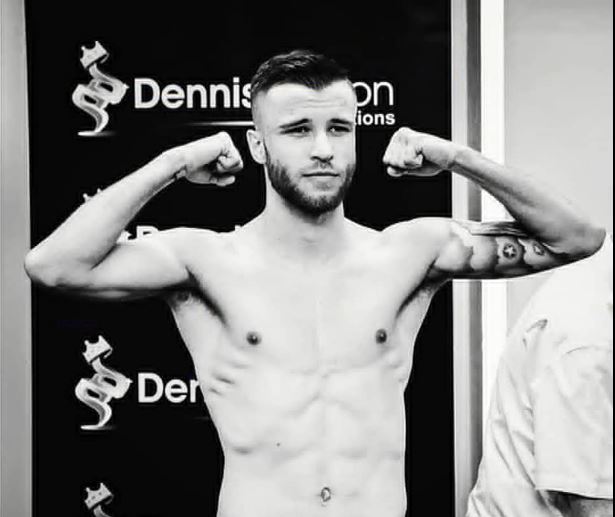 Frank on being undefeated so far and his future potential:

"I don't think I'm anywhere near my peak. To be honest, I won't show what I'm fully capable of until I'm twenty-nine or thirty. I'm twenty-six now, so I've got a couple more years until I come into my prime. I've still got to get a bit more strength and things like that, but I think it's just like life basically - the older you get, the more you learn and the more experience you have. I 100% believe the best is yet to come from me."

Frank on the challenge that Tecuapetla brings on November 29th:

"You 100% can't judge every fighter by their record. We've had a little look at him and he looks really rough and rugged. He's going to come and give us a go with everything he's got. Like you said, he's been in the ring with former world champions; he's fought for the world title down at light-flyweight. The guy's been in with that calibre of opponent, so we'll prepare ourselves across the board for this fight. We're ready for a hard twelve rounds. To be honest, I think his style is really going to compliment me and how I box. I think I'm going to look good against this guy. This is going to be the performance that I wanted to put on last time. A few wrongs that I did last time - I'm going to put right on the 29th."

Frank on moving down to flyweight for this fight:

"I've fought at super-fly my entire career. I've been pro just over three years now. I never thought that I'd be able to make flyweight, but I work with the Sheffield United first-team nutritionist, Lee Rickards. I worked with him for my last fight because I was curious what the difference would be. I've always done my own diet and things like that. The way that I made weight last time, I made it with ease. Any fighter will tell you that making weight isn't the easiest thing to do. The guy had me drinking five litres of water on Monday, Tuesday and Wednesday - that's on fight week! I asked him if I could do flyweight and he said, 'if you get a good opportunity at flyweight - I can 100% get you there'. It just so happens that Dennis and Steve have got this opportunity, so that's what we're going for. It's worked out perfectly."

"We've already looked at him and he's the man that we're gunning for. I just think that would be a great fight for me. We've got to get through this Mexican first, Flores is the actual champion, so he's obviously the man we're going to try and get."

"We've had Sunny Edwards calling me out quite a bit, so that's a fight that I'd absolutely love. We got offered that for the British title. It's a fight that I'd love, but at the end of the day it's up to Dennis, Steve and Glyn Rhodes, and their opinions on that is that they want to build it up and think it'll be a bigger fight, as long as we both keep on winning and we meet a little bit further down the line. I'm not Floyd Mayweather; I don't pick and choose who and when I fight. When I turned pro, I gave my career to my management team and I beat whoever they put in front of me. I really believe that'll be a massive event for Britain, it'll sell brilliantly and who knows, it might even be for a world title? If we both win world titles before we meet, we'll have a little unification."

Dennis Hobson Promotions, in association with JJ Crump, present an evening of boxing at Sheffield’s Ponds Forge Arena on November 29. Topping the bill will be Sheffield’s Tommy Frank and Barnsley’s Josh Wale in IBO championship contests.

Is this the same Tommy Frank who wouldn't fight Jay Harris?