Timothy Bradley: I Don't Want to Do Any More Damage to My Brain

Timothy Bradley will always appreciate how much fans enjoyed and respected his epic performance in that unforgettable brawl with Ruslan Provodnikov.

Bradley was so dejected during the aftermath of his extremely controversial victory over Manny Pacquiao, the former two-division champion says he had suicidal thoughts. Beating Provodnikov in their stirring slugfest gave Bradley back his rightful place in boxing and re-established the confidence he needed to upset Mexican legend Juan Manuel Marquez in his following fight.

Memories of his brutal battle with Provodnikov in March 2013 also made Bradley more comfortable with his recent decision to retire. Bradley, who suffered a concussion against Provodnikov, just doesn’t want to go through anything like that again. 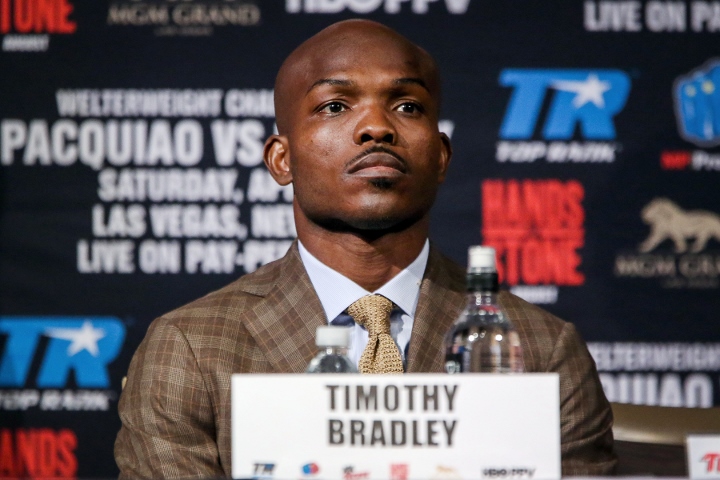 The Palm Springs, California, native told co-hosts Gerry Cooney and Randy Gordon during the most recent episode of SiriusXM’s “At The Fights” that he was worried he would suffer permanent brain damage if he continued to fight.

“I’m very happy,” Bradley said regarding his decision to retire. “I’m not upset. I don’t think I made a mistake. There’s always that window to come back, but, man, once I said I was leaving, man, I just said, ‘I’ll never be back, man.’ I made that decision before I just made the decision to hang ‘em up. But I left a lot of money on the table, I left a lot of opportunity on the table, because, you know, my family is the most important thing in my life. And I couldn’t imagine not being able to – if I stayed in too long – not being able to spend time with my grandkids or spend time with my children, you know, in my 50s.”

Bradley, who’ll turn 34 on August 29, retired with a 33-2-1 record, including 13 knockouts and one no-contest. His lone losses came in his second and third fights against Pacquiao, but Bradley made more money from his three bouts with the Filipino icon than he ever dreamed possible.

Now he hopes to spend his retirement enjoying the fruits of his dangerous labor with his wife, Monica, and their five children.

“I’ve been doing this for 23 years, man,” Bradley said. “I’ve been getting hit upside the head for 23 years. With all the information we know now about concussions and getting hit upside the head, I know it’s inenvitable for me to get a traumatic brain injury. But I know that if there’s any damage done, I don’t wanna do any more damage to my brain.

“So I’ve made good money in the sport of boxing. You know, Top Rank’s been good to me. I fought Manny Pacquiao three times, Marquez. Those were some of the big highlight fights there. I wish I could’ve had a chance at Floyd [Mayweather], but that didn’t happen. That didn’t happen, but you know, it’s all right.”

[QUOTE][B]Robbed[/B] Provodnikov after getting battered, life and death with Chaves, beat by Pacquiao 3x's, beat an old blown up Marquez by not that wide, and put on queer street by Jesse Vargas. I'm glad he retired. He didn't do much…

[QUOTE=budfr;17942993]Call me a racist if you want but this guy recieves 3 gift decisions vs Provodnikov, Paquiao, and Marquez because of his race. He retires because he is a coward.[/QUOTE] Lmao ydksab. He schooled marquez

[QUOTE=LockardTheGOAT;17939611]Yet Floyd is 40 and still fighting. How 'bout that. Don't get involved in a brutal sport like boxing if you aren't willing to risk the health implications. As for Tim Bradley, good fighter but not great. Says it all…

[QUOTE=Thraxox;17939533]Bradley, you shortened your career because you are stupid enough to try and prove yourself to the fans and critics that you are warrior and not a runner coward like they claimed in the Pac fight. Because of that stupidity…

Nobody knows why he got 3 opportunities against manny, he clearly lost first one. He beat Chaves, but probably lost against Provodnikov also. Overrated at 147.