Only “One Time” in his past six fights has Thurman won by knockout. And that victory came by technical knockout four years ago, when Luis Collazo couldn’t see out of his left eye and their scheduled 12-round title fight was stopped after the seventh round. 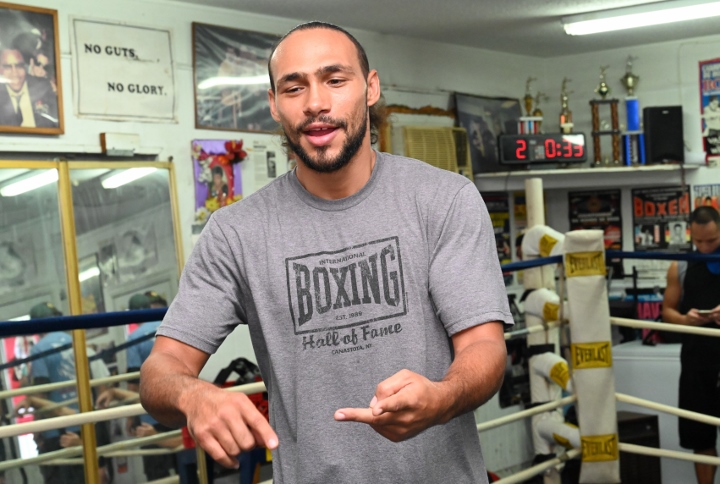 Thurman (29-0, 22 KOs, 1 NC) discussed facing Pacquiao (61-7-2, 39 KOs) on Wednesday as part of a media workout at trainer Dan Birmingham’s gym in St. Petersburg, Florida. The 30-year-old Thurman thinks that the Filipino southpaw is particularly vulnerable to the body.

“I bet none of Pacquiao's sparring partners were going at his body,” Thurman said. “Keith ‘One Time’ Thurman is going to touch the body. I want to know how he reacts.”

Thurman reacted incredulously when asked about being listed as a slight underdog against a 40-year-old opponent.

“I can’t be the underdog because I am the undefeated champion of the world,” Thurman said. “He’s the legend, but I have 10 years of youth on my side. However, we’ve seen world champions and legends do tremendous things at later dates. For example, Bernard Hopkins won the world title at 45 years old. Is Manny Pacquiao that kind of world champion? Keith Thurman will be the first one to find out.”

Birmingham believes Thurman will be too big, too strong and too good for Pacquiao.

“I think he’s [at] the top of this division,” Birmingham said. “I think he’s the very best out there, I really do. Keith has a new focus and increased intensity for this one. He’s anxious to fight and anxious to train. His power, ferociousness and tenacity will be a problem for Manny. We’ve only increased that in this camp.”