Thurman-Porter Most Watched Bout of 2016 To Date

Keith Thurman continues the steady transition from "One Time" to primetime.

The unbeaten welterweight titlist was forced to walk through hell and beyond in order to prevail over Shawn Porter in their Fight-of-the-Year level 12-round war Saturday evening at Barclays Center in Brooklyn, New York.

The CBS-televised headliner carries even more good news, with the time slot allotted to the fantastic battle pulling in an average of just over 2.4 million viewers according to the first round of ratings results provided by Nielsen Media Research, making it the most watched bout of 2016 to date. 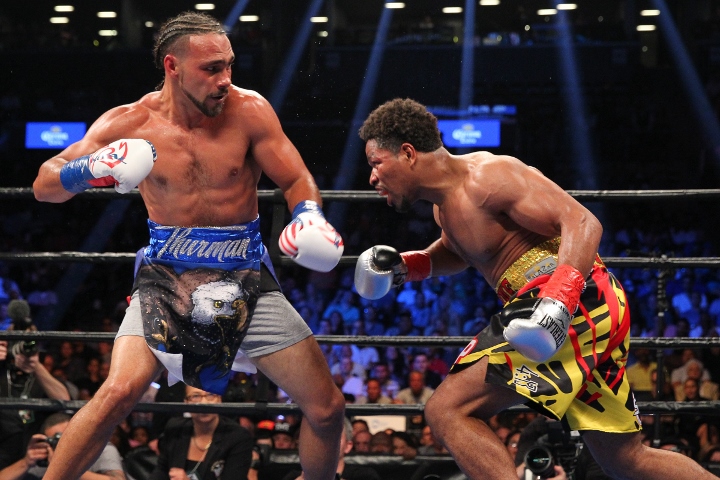 Overall, the two-fight telecast generated a 1.8 overnight rating. Preliminary Nielsen numbers - which only measures the top 56 U.S. TV markets - have the event averaging 2.12 million viewers in the first boxing telecast to air on CBS in primetime since 1978, when Leon Spinks shocked the world in a 15-round decision win over Muhammad Ali to claim the World heavyweight championship.

Saturday's affair won't run alongside Spinks-Ali I (which generated 70 million viewers at the time) in the history books, but the night was still a much needed win for the sport of boxing, at least as it relates to the current stateside scene. Lawsuits, social media feuds and abandoned matchups have plagued the first half of 2016, but Thurman and Porter did their part to restore hope in the industry, leaving it all in the ring in topping an event that also generated the largest live boxing gate in the young history of the Barclays Center since opening its doors in 2012.

Momentum was gained throughout the event, undoubtedly from positive word-of-mouth given the increasing drama in the headlining act. The welterweight heat began at a 2.0 overnight rating, growing to 2.6 during the final 30 minutes of the telecast.

Thurman-Porter surpasses the previous clubhouse leader, when Danny Garcia claimed a vacant welterweight belt with a 12-round victory over Robert Guerrero this past January. Garcia-Guerrero generated roughly 2.3 million viewers in headlining the first edition of Premier Boxing Champions (PBC) on Fox in primetime.

Both fall short to the most viewed PBC event, which came with the inaugural installment last March when Thurman bested Guerrero in the first NBC primetime boxing telecast in 30 years. The bout averaged 3.2 million viewers, peaking at 4 million viewers, making it the most watched televised contest of 2015.

Ratings for the PBC platform have steadily declined across the board, but a strong push went into Saturday's event, which was an extension of the Showtime Championship Boxing series (Showtime and CBS are both part of CBS Corp, Inc.).

It was a victory for the network and event handlers as well, as all involved were forced to navigate through a three-month delay from the originally scheduled March 12 date. The bout was forced to move back when Thurman sustained injuries in a car crash in late February, thus cancelling the show altogether.

Abner Mares was due to appear on the March 12 card versus Fernando Montiel. Both were given new assignments, with Montiel suffering a violent 1st round knockout loss at the hands of Jorge Lara in the April 30 edition of PBC on Fox.

Meanwhile, Mares was given an upgrade when the former three-division champ was presented with the opportunity to challenge unbeaten featherweight titlist Jesus Cuellar in the co-feature slot. That bout wound up hitting the scrap heap, when Mares was forced to withdraw after failing to meet the minimal vision standards during his pre-fight physical as conducted by the New York State Athletic Commission.

Inserted into the lead-in slot was a matchup of unbeaten super welterweights. Red-hot prospect Jarrett "Swift" Hurd made the most of the moment, scoring a 10th round stoppage of Oscar Molina. Their chief support drew a preliminary rating of more than 1.8 million viewers. The number surpassed the main event from a week ago when Joe Smith Jr. pulled off an Upset-of-the-Year level 1st round knockout of perennial Top 5 light heavyweight contender Andrzej Fonfara in the June 18 edition of PBC on NBC.

Final network ratings - including peak viewership - will be released by Nielsen Media Research on Tuesday. As sports ratings typically trend upward given the time slot variation in each time zone, more good news is expected to follow for a night that was enthusiastically celebrated by the boxing public who'd longed for a happy ending.

Scipio if the free telecasts are generating revenue, why has PBC already lost hundreds of millions of dollars? I don't understand why you think this business model will work when all it's done so far is lose money. Have you…

[QUOTE=Boxing Logic;16835436]I agree with you that the model could work if they just use the free slots as advertisement for their stars in mismatch fights, getting exposure, while making the best fights on PPV. This is a terrible model for…

[QUOTE=Boxing Logic;16830047]2-3 mil viewers sucks though for CBS. You are used to premium cable numbers, where 1 mil is a good night. On CBS 2-3 mil still sucks. Those are awful ratings. If PBC survives it will be by using…