Thurman: My Gut Says Spence Wins; He Better Not Let Garcia Land One Of Those Bricks

Their 12-round battle in March 2017 has convinced Thurman that Garcia is capable of knocking out Errol Spence Jr. on Saturday night. The former WBA and WBC welterweight champion still suspects Spence will out-point Garcia in their 12-round fight for Spence’s IBF and WBC 147-pound championships at AT&T Stadium in Arlington, Texas.

“Danny Garcia’s the biggest puncher I’ve faced in the ring in my entire professional career,” Thurman said as part of a predictions poll released Thursday by Premier Boxing Champions. “Danny’s got great timing and a chip on his shoulder from losing two close fights to myself and Shawn Porter. So, Errol Spence better not let him land one of those bricks.

“But styles make fights, and my gut says Spence wins without a home run being hit by Garcia. Spence has all of the skills and technique to come out with the ‘W’ against Garcia, whom I was able to hurt with a big punch in the first round.” 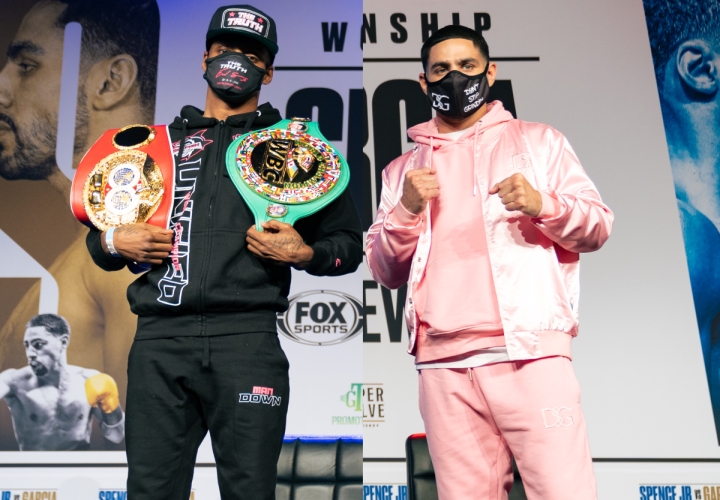 Garcia weathered whatever trouble Thurman’s left hook-overhand right combination caused in the first round of their 12-round welterweight title unification fight 3½ years ago at Barclays Center in Brooklyn. Thurman (29-1, 22 KOs, 1 NC) edged Garcia by split decision in their 12-rounder that night to defend his WBA belt and take the WBC crown from Garcia.

The 32-year-old Garcia’s only other loss was a 12-round, unanimous-decision defeat to Shawn Porter in September 2018 at Barclays Center.

Porter captured the then-vacant WBC championship that night. Las Vegas’ Porter (31-3-1, 17 KOs) lost it a year later to Spence in their own championship unification match in September 2019 at Staples Center in Los Angeles.

The 30-year-old Spence will fight for the first time Saturday night since sustaining cuts to his face and body and damage to his teeth in a one-car accident in October 2019 in downtown Dallas. Thurman, like everyone else who’ll watch Saturday night, is interested to see if Spence has fully returned to form following that accident.

“Spence has that right hook, which he can land to the temple,” Thurman said, “and those pot shots, as well as a long and stiff jab to go with a height and reach advantage that led to his complete shutout of Mikey Garcia. But Spence has that ‘Man Down’ philosophy, and he’s not a fighter who plays with his food. When he gets you hurt, he gets you outta there. But it could come down to who lands the biggest punch first, and a lot of folks want to know how Spence is after that car accident.”

Run time with his subtle disses.. I'ma practice talking like him as the compliments only are to compliment himself 🤣

Anyone can be hit and hurt with the right shot by any fighter. But a lot of the top level fighters are taught to roll with the power shots, defend against them, and have great muscle memory to recover. So…

doubt Spence will get into a war like he did vs Porter.. He's gonna have his dancing shoes and pop shot Danny. Nothing wrong with that... Trading is what Danny wants

[QUOTE=Bronx2245;20929920]Sign the contract to fight Ugas, or STFU![/QUOTE] Perfect suggestion. Be a GREAT fight. One I would actually LOVE to see! Think Ugas is the real deal. At this stage in their respective Careers, my money would be on Ugas.…

[QUOTE=Bronx2245;20929920]Sign the contract to fight Ugas, or STFU![/QUOTE] Either one would be better than him trying to stay relevant by just talking.