With the boxing business basically shut down temporarily, Keith Thurman won’t rush to test out his surgically repaired left hand.

The former WBA welterweight champion has been encouraged, however, with how it has healed since he had surgery September 4 in which Thurman’s metacarpal bones were fused. Once he has full use of his left hand, Thurman expects to regain the form that made him an elite welterweight.

“I wanna become a complete monster again, because that’s what I’m capable of,” Thurman told BoxingScene.com. “I’ve dominated the welterweight division before, and I believe that I can do it again if I come back 100 percent.” 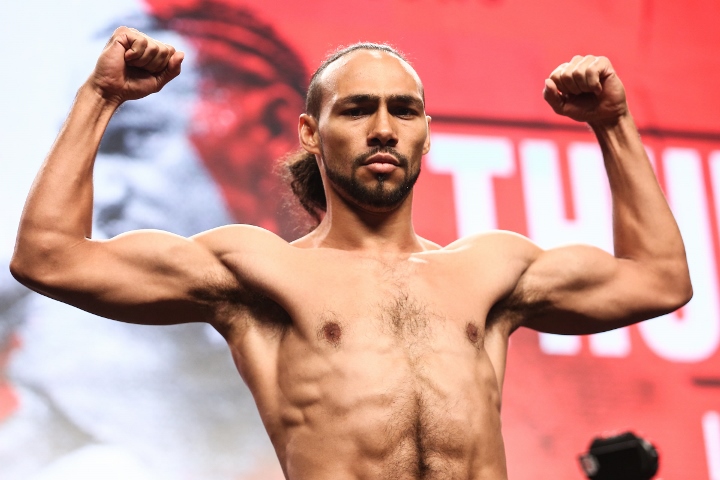 The 31-year-old Thurman’s left hand bothered him while he trained for his two fights in 2019 – a tougher-than-expected, 12-round, majority-decision victory over Josesito Lopez and a 12-round split-decision defeat to Manny Pacquiao. The Clearwater, Florida, native hasn’t fought since Pacquiao edged him in their welterweight title fight July 20 at MGM Grand Garden Arena in Las Vegas.

Once doctors informed Thurman that rest alone wouldn’t heal his hand, he underwent surgery six weeks after the Philippines’ Pacquiao beat him in their FOX Sports Pay-Per-View main event.

The coronavirus pandemic hasn’t really impacted Thurman’s return because he didn’t expect to fight until sometime this summer. Regardless, Thurman (29-1, 22 KOs, 1 NC) is confident he’ll be back at full strength before too long.

“It feels pretty strong, as far it’s all in one piece,” Thurman said. “The flexibility is almost back to 100 percent, so we’re real happy with that. We just know that it hasn’t punched in a while and we still have to build up a little bit more strength in some of the small ligaments around it, to get ready for heavy contact.

“It’s really just by feel right now. With nothing really on the calendar or anything, I’m not trying to go all out. We’re just building up into heavier contact. But I am getting into light contact as of now. So, it’s really just off of feel. But, you know, being a heavy puncher, I’ve hurt myself many times. So, at the end of the day, we’re just gonna see how it holds up and take it in stages.”

Bet Thurman's missus is nagging him to go back to Tibet or wherever she comes from. One last big fight for the Retirement in Paradise Fund eh Keef.

You was a monster for pac. Just Pac made you look like p*s#y cat

I hope he stays hungry because he could add alot to boxing when it returns. During this time, smart fighters have a home gym and are staying sharp, staying in shape.

Finally!! he Wakes up!!! Lets go Thurman! We gonna ride with u till the end! Florida in the house!