Is This Version of Keith Thurman as Good as The Previous One?

One has to feel for Keith Thurman. The 30-year-old WBA welterweight titleholder, speaking the day before he fought Josesito Lopez this past Saturday in Brooklyn, bemoaned the fact that he lost two of his peak years to injuries before expressing optimism about the future.

But after his shaky performance against Lopez, it’s understandable to ask whether he’ll ever be the fighter he was only a few years ago.

I wrote recently that Thurman is one of several 147-pounders who the 40-year-old Manny Pacquiao should avoid for fear of the Filipino’s safety. Now I’m not so sure. Bob Arum was in full promoter mode when he criticized Thurman’s performance and suggested Pacquiao could beat him, but he might be right.

“I do not think Thurman can keep fighting, I think he looked terrible against Lopez,” Arum said. “Yes, I think it's a fight that (Pacquiao) can win, it is,” he added. “I think Freddie (Roach) saw the same thing as me.”

We shouldn’t overreact after one performance.

Thurman (29-0, 22 knockouts) hadn’t fought since he defeated Danny Garcia by a split decision in March 2017, 22 months ago. He had surgery in May 2017 to repair his injured right elbow and then damaged his left hand after he resumed workouts, setbacks that kept him on ice and out of the gym for most of his hiatus.

As a result, it was reasonable to expect some rust. Thurman himself reminded us before and after the Lopez fight that he wouldn’t be 100 percent.

“I said you wouldn't see the best Keith Thurman tonight, but you'd still see a world class performance, and I gave you that tonight,” he said immediately after the fight. 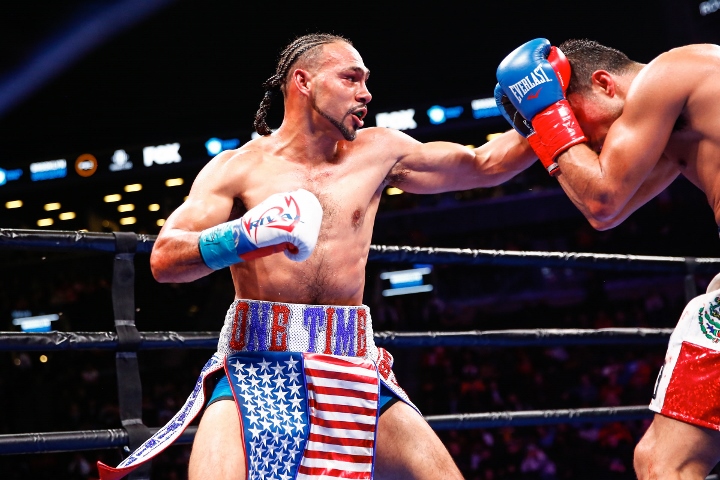 And while Lopez isn’t a highly rated welterweight, he’s a solid, experienced veteran who was hungry to stay relevant going into the fight Saturday. His trainer, Robert Garcia, told anyone who would listen beforehand that Lopez had a strong training camp and would give Thurman trouble even though he too hasn’t been particularly active the past several years.

That said, Lopez, who presumably was selected as Thurman’s comeback opponent because of his perceived limitations, had more success than most imagined he would going into the fight.

The seventh round stands out. Lopez hurt Thurman with a left hook and followed with a barrage of hard, accurate punches that stunned the titleholder and all those who thought Lopez would be a pushover. Thurman survived and rallied to secure the decision but we saw what we saw in that round and other junctures of the fight.

Is there reason for alarm on the winner’s part? Could Arum be right? Or was the so-so performance merely a means of shedding rust after a long layoff and a step in the right direction?

I lean toward the latter position.

We saw on Saturday the speed and athleticism that helped Thurman beat Shawn Porter, Danny Garcia and other good fighters in his 20s. And his timing, the facet of a boxer’s game that typically suffers as a result of a layoff, wasn’t awful. He landed punches with enough consistency to win rounds.

Lopez’s ability to land hard punches is more difficult to explain – and probably a concern – but I’m comfortable chalking that up to the rust and Lopez’s underestimated ability and preparedness under Robert Garcia.

Thurman seems to have had no problems with his elbow or hand during or after the fight, which is key to his future.

And while the fight raised legitimate questions about him, a tough, taxing challenge was exactly what the doctor ordered. He will be in his next fight a sharper boxer than the one who walked into the ring and struggled at times against Lopez.

Of course, we’ll learn more going forward. Thurman wants to fight Pacquiao on pay-per-view, which would give him tremendous exposure and earn him the biggest payday of his career. And the fight can be made fairly easily if Pacquiao also wants it; they both now fight for advisor Al Haymon.

So who wins? While I’m not as certain that Thurman would prevail as I was before the Lopez fight and Pacquiao’s victory over Adrien Broner on January 19, I still believe that Thurman’s tools – the speed, the athleticism, perhaps even the power – would be too much for this version of Pacquiao.

Why do no boxers work their neck?? I understand limber, but surly the extra girth in the neck, would help with absorbing impact. Note to any and all lifters: Set a pillow on the side of your head while you…

It was one fight after 22 months, give the guy a break. Mikey was out for nearly 3 years and looked rusty in the first rounds against Rojas. Now he's back on top fighting Spence and no one's talking about…

I'd favor Pac over Thurman even before his injuries. I just think Pac doesn't mesh well with Thurman's style. Thurmans approach will be to avoid exchanges with Pac. I never put much into the belief that Manny had lost a…

[QUOTE=Devils Advocate;19482632]Yeah Thurman was passed over for years by Malignaggi, Maidana, Mayweather, & Khan. Hell even Guerrero tried to duck Keith so at this stage of his career if he can make 5M fighting a legend on PPV I’m good…

Thurman has NEVER been elite. Ever. He has been way beatable but the class of fighters he is with, i.e. Porter and Garcia could beat him any given day. Spence and Crawford will dominate him. He would never have survived…