One of the fighters who knows Floyd Mayweather best has dismissed his suggestions he has declined, but still expects Conor McGregor to "put up a great fight" on Saturday night.

Britain's Ashley Theophane, 36, has been working with Mayweather since 2012 and was unexpectedly signed by Mayweather Promotions in 2013, since when he has largely thrived.

The former British light-welterweight champion lost a decision to Japan's Shoki Sakai in Las Vegas on Tuesday evening, but trained alongside Mayweather as the American prepares to fight for the final time on Saturday at Vegas' T-Mobile Arena. 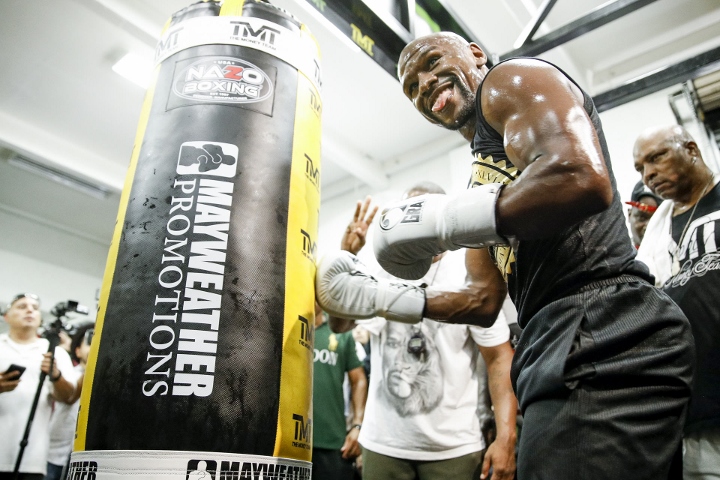 Amid a widespread belief that his match-up with McGregor, who is making his professional boxing debut, will prove highly uncompetitive, the 40-year-old has spoken of slowing down and his need for more rest during his preparations.

Theophane, however, insists he has seen nothing to suggest he is not the same level of fighter who so convincingly outboxed Andre Berto when he last fought in September 2015. He also says he remains so impressive that footage of his preparations has been held back.

"He's getting older, has made his money, wants to enjoy life, but he could go on. There's no need to because of what he's achieved, but he's still got it so we'll see a good performance on Saturday.

"They haven't released many clips because they didn't want to scare (McGregor), but he's amazing to watch, even now. It's inspiring for any boxer to watch him train.

"Floyd's a guy who thinks, he works hard but when he's actually in the boxing ring, it's him thinking. He's fast, he's got skills, but when you're in the ring he tries to set traps, so it's more you have to think.

"He's an all-time great, when you watch him train, you can see his greatness. From two years ago you can't see it. The work that he's been doing from 2012 until now: it's the same.

"He's going to set traps, see what (McGregor) does in the first two rounds, and after that close the show."

For all of his confidence in his friend and promoter, Theophane does not share the view the 29-year-old McGregor will prove significantly out of his depth.

He revealed he and fellow Mayweather Promotions fighters Badou Jack and Ishe Smith are impressed by the Irishman's confidence, and believes that it could even carry him into the second half of Saturday's fight.

"We believe he believes he can beat Floyd, but when he's in the ring with him it's going to be a different thing," the Londoner said. "It's going to be a good fight. He believes in himself, he'll come out in the first two rounds and give his all, but after that the talent will tell.

"Floyd should stop him, he's supposed to stop him. A lot of folks have said it's not a fight, but he's going to go in there and try, he doesn't care who Floyd is. For however long it lasts, it's going to be a good fight.

"(Mayweather wins) before round nine, but before then both guys will put up a great fight. Even if he does lose, it doesn't matter: it's his first professional fight."

Where are all the Floyd haters? I fully expected someone to claim those pock marks on Floyd's side elbows were from PED needles or IV drips or something. [IMG]http://photo.boxingscene.com/uploads/floyd-mayweather%20(34).jpg[/IMG]

I'm sure he looked ok in sparring although he probably didn't stop Eubank jr or Spence in sparring.

[quote=thefreshbrawler;17976578]while mcwelfare was busy doing photo opps with his sparring partner. Dude ain't nothing but a over hyped charlie zelenoff lol[/quote] conor kardashian....