Theophane: Controversy or Not, Broner Has a Hard Night Ahead

From the moment the fight was announced, fans and media members questioned how competitive Ashley Theophane will be in his title challenge versus Adrien Broner.

Given recent events, it’s not out of the question that the hard-luck super lightweight contender is in fact catching a defending titlist at the right time.

Their 12-round title fight headlines the April 1 edition of Premier Boxing Champions (PBC) on Spike TV, airing live from D.C. Armory in Washington, D.C., Broner’s home away from his Cincinnati hometown.

For the next few days, the nation’s capital will provide Broner with the comfort of every day freedom. Awaiting the brash boxer – who has claimed titles in four weight classes in his still young career – back home is an arrest warrant on charges from an alleged incident claimed to have taken place earlier this year.

It hasn’t (yet) affected his preparation for the upcoming bout, nor is his challenger banking on any worst-case scenario from the 26-year old defending champ. Enough heartache has taken place in Theophane’s career to ever walk into a fight thinking everything is stacked in his favor.

Still, it doesn’t make him any less confident.

“I don't pay attention to what he does outside the ring. I think he has a hard night ahead with me regardless,” Theophane (39-6-1, 11KOs) told BoxingScene.com in a recent interview. “The manner in which he promotes a fight (referring to everyday behavior separate from current looming legal charges), he’s not very professional. That’s just how he is.

“If he’s not taking me seriously – I know I’m a big underdog, but if he’s of that mindset, then he’s in for a very long evening. I’m not expecting that from him, although I’m also not worried about where his head is at. I’m focused on what I can control.”

Providing the career-defining he so craves is the tireless work he continues to put in the gym. Born and raised in London, the 35-year old has regularly trained out of the Mayweather Boxing Gym in Las Vegas ever since signing with Mayweather Promotions.

At the time of his promotional deal, Theophane was 33 years old and with a less-than-sparkling record of 33-5-1. He lost his first fight under the pact, a 10-round decision to Pablo Cano on the undercard of Floyd Mayweather’s victory over Saul ‘Canelo’ Alvarez in Sept. ’13, at the time the most lucrative event in boxing history. 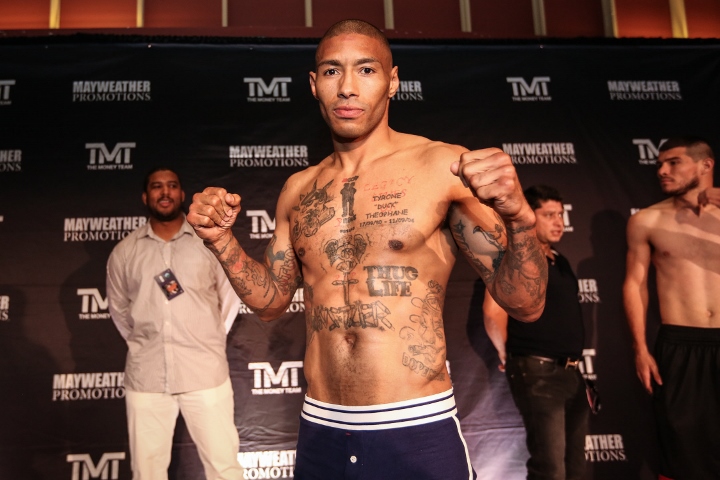 That mark was since surpassed by Mayweather’s long-awaited showdown with Manny Pacquiao, whom he bested in their welterweight championship clash last May. His string of wins have made him the richest fighter to ever lace up a pair of gloves, but at no point – not even after his retirement last September – has his work ethic changed.

“To watch this man work out, for him to offer you advice... I've known him for four years,” Theophane says of Mayweather. “I've witnessed six camps. He's the greatest of our time. As a boxer, you want to be around the best. To be signed by the best is a special thing.”

Seeing the man in charge working that hard has inspired those under his promotional banner. Theophane took note of that in his first day at Mayweather Boxing Club, with the team in turn taking note of the Brit’s own tireless efforts in the gym.

“One thing I can say about Ashley Theophane, is that he is one of the hardest working athletes I’ve ever met,” Mayweather Promotions CEO Leonard Ellerbe told BoxingScene.com. “You see the work he puts in day in, day out and you just want to do more for him. We’ve always seen it in Ashley and knew that he would get to this point through everyday hard work.”

Theophane has rewarded his promoter’s unbridled confidence with a six-fight win streak heading into Friday’s showdown with Broner (31-2, 23KOs). The occasion represents his first career title fights, overcoming several questionable decisions along the way and managing to persevere at a point in his career when few beyond his inner circle believed in him.

“I’ve long sought a career-defining fight, and Leonard and Floyd – ever true to their word – delivered on their promise to get me to this point,” recognizes Theophane. “I was never given a break before signing with them.

“If you don't have someone looking out for you, nobody cares about you. I always have that belief in me, to work hard. When I saw how hard that Floyd works - and he's THE man - I just tried to follow suit. Now here I am, in a position to bring home yet another world championship to the Mayweather Promotions family.”

Of the six losses on his ledger, Theophane takes greater issue with those that were staged in his home country. Most who regard him as a hard-luck contender will often point to his hotly-contested split decision with then-unbeaten prospect Danny Garcia in their Feb. ’10 ESPN2-televised crossroads bout.

Whether or not he believes he deserved the nod, Theophane understands why things didn’t go his way on that night. He doesn’t understand some of the other losses that have taken place in his career, but no longer worries about going in the ring without a strong support system.

“When you don’t have someone looking out for you, a good promoter in your corner, the close fights you could’ve won instead don’t go your way because you are the opponent,” Theophane acknowledges, in part accepting the loss to Garcia as just the nature of the business. “That fight took place when Danny was on the rise and I was just the next opponent on his list.

“It didn’t turn out the way I wanted, but it’s all part of what led me to this point. Even with Mayweather, I lost my first fight under them (to Cano) – and rightly so. I bounced right back, and have now won my last six, with some good performances in there, performances I’m proud of in building to this moment.”

Neither that win nor the five preceding it were viewed by boxing observers as grounds to serve as the first challenger for the title Broner claimed last October. It’s criticism he easily embraces, knowing the road he’s previously traveled all alone.

“Fans were moaning that I don't deserve a world title shot,” Theophane points out, though not without a reminder of his own past struggles. “I didn't hear them when I was ranked #4 and couldn't get my shot. Floyd has done his job and got me the biggest name in the division. Now it's up to me to go get the win.”

Not only is Broner a known commodity, but he stands to gain adopted hometown advantage should the fight fall in the hands of the three judges. Though born and raised in Cincinnati, the reigning 140 lb. titlist regularly divides his training camp between his home base and HeadBangers Gym in D.C., run by noted trainer Barry Hunter, who trains Broner along with career-long coach Mike Stafford.

Much as he doesn’t pay attention to his opponent’s antics, Theophane is none too concerned about how the scorecards will be filled out by fight’s end. All he can control is the hard work he’s put in beforehand and how he executes his game plan on fight night.

“I can't worry about the judges not doing their job,” Theophane notes. “Floyd and Leonard will be there and will make sure the best judges are selected. My job is just to go in there and fight my fight. I've had no issues with the judges in the U.S. I'm not getting stopped. There's no way.

“When it does go 12 (rounds), I just need to put in the performance of my life. I believe they will do their job.”

As for whether he can expect any more sidebar nonsense from his opponent?

“I'm happy for him to take the lead on this promotion and mug for the camera,” Theophane insists. “The only thing I care about is getting that win. I just have to go out there and perform to the best of my ability, regardless of where his head may be at.”

Broner will definitely have a hard time cuz he doesn't fight with a gameplay in mind, he just depends on his great reflexes and physical abilities...careful cuz Theophane is a veteran