Terence Crawford vs. Amir Khan Isn't Ideal But It's Fun

Of course, Terence Crawford will be a heavy favorite when he defends his welterweight title against Amir Khan on April 20 on pay-per-view television.

Crawford is either No. 1 or 2 on most pound-for-pound lists while Khan has become infamously inactive, fighting only four times during the past four-plus years. The Briton fought twice in 2018, his first multiple-fight year since 2014.

Crawford is a complete fighter, quick, skillful, powerful and durable. Khan also is quick and a good boxer but is known as much for his weak chin as any attribute.

In light of all that, I won’t be surprised if just the right shot to Khan’s jaw puts him down and out at some point in the fight, perhaps ending his career as a championship-level fighter.

And, yes, I’d rather see Crawford fight one of the other titleholders – Errol Spence, Keith Thurman or Shawn Porter – or perhaps Mikey Garcia. Those fights would generate more pre-fight excitement than Crawford vs. Khan.

Win or lose, Khan (33-4, 20 knockouts) has always been fun to watch. That’s a product of both his ability – including his remarkably fast hands – and his willingness to exchange punches in spite of his inability to take them.

I’m thinking about his brawl with Marcos Maidana in 2010, a fight that Khan controlled until a huge right hand turned his legs into the consistency of properly cooked spaghetti in the 10th round.

Mayhem followed but Khan managed to be on his feet at the final bell and claim a unanimous-decision victory. That fight was great fun. And there were more like it.

Indeed, Khan is like a ticking time bomb that might or might not explode, which is always exciting. You wonder from beginning to end when the decisive punch will land. 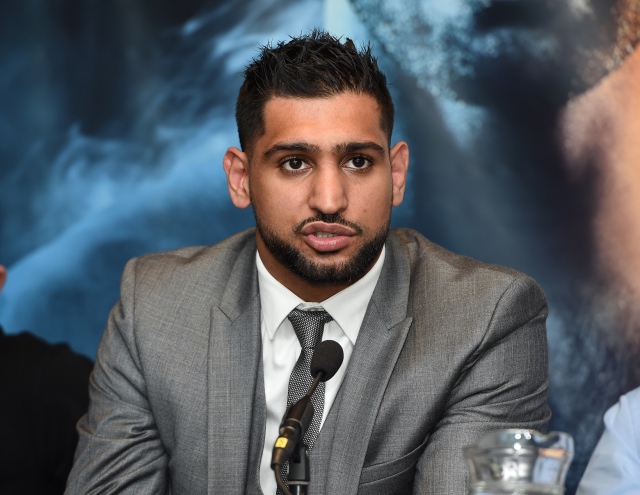 If it doesn’t, he generally wins on points. He has lost only one decision, the split variety to Lamont Peterson. And referee Joseph Cooper arguably stole the victory from him, docking him two points for pushing.

The problem is that the bomb detonates periodically. He was holding his own against Danny Garcia in 2012 when BOOM!!, TKO 4. He was acquitting himself reasonably well against the much bigger Canelo Alvarez in 2016 when KAPLOOEY!!, KO 6.

Khan didn’t have time to do much of anything in his first-round knockout loss to Breidis Prescott in 2008, the fight that revealed the glass located immediately below his mouth.

Either way, victory or knockout loss, Amir Khan fights are rarely boring. And I don’t believe the April 20 meeting with Crawford (34-0, 25 KOs) will be any different.

I don’t think it’s a good style matchup for Khan. Crawford can more or less match his hand speed and probably is more skillful, which eliminates two advantages Khan would have against a lesser opponent.

As a result, Crawford is likely to land punches with some regularity. And while the Nebraskan doesn’t have unusual power, he has more than enough to hurt Khan. We know what that could mean.

I’m guessing that Khan once again fails to reach the final bell or loses a decision, becoming just another notch on Crawford’s collection of championship belts and supporting the opinion of those who don’t believe Khan deserves the opportunity.

I give Khan a chance, though.

He’s not old, only 32, a year older than Crawford. He’s probably fresh given the inactivity going into last year. And, more important, I think he’s a better all-around fight than some give him credit for.

Lest we forget, he won a silver medal in the 2004 Olympics at 17 years old. He has won three major junior welterweight titles. He is 10-3-1 against former or current world titleholders and 6-3 in title bouts. Among his victims: Marco Antonio Barrera, Paulie Malignaggi, Marcos Maidana, Zab Judah, Luis Collazo and Devon Alexander.

That’s the resume of an excellent fighter, one with an effective combination of ability and experience.

Maybe Khan’s hand speed will give Crawford more difficulty than we realize. Maybe he’ll be harder to hit than we expect; he has good defensive skills. And, who knows, maybe he’ll be able to take a hard punch from Crawford – a la Maidana.

I don’t see that happening but I wouldn’t put it past a fighter as accomplished as Khan. He’s no pushover.

And I’m pretty certain of one thing: Even if Crawford beats Khan easily, even if he ends the fight with one punch, no one will feel as if they’ve wasted their time or money by tuning in.

They better stack this undercard if they are gonna get my $. Watching Teofimo blowing out some can isnt doing it. Ito-Herring title fight would be a good start

Should be an interesting fight. Possibly the toughest fight yet for Crawford, since Khan is the fastest fighter he'd have fought. I can see Khan leading the early rounds like he did against Canelo and others. But like others have…

Crawford the feather power puncher that is more boring to watch than any boxer registered on boxrec. I hate Khan but my little dream is that he would have beat the Nr. 1 Boring fighter to watch in Crawford.

Although I rarely ever click on these types of "articles" I always wondered how many people read these opinion pieces. Based on the amount of comments I guess at the very least a handful are reading this garbage. To each…