Teofimo Lopez: I Understand Experience Plays A Big Role... But They Said The Same About Commey

Such a comparison, however, shouldn’t be mistaken for Teofimo Lopez Jr. serving as a rank novice.

The unbeaten lightweight titlist has heard throughout the promotion for multi-belt lightweight unification clash with Lomachenko that he lacks the background and experience of his upcoming rival this weekend (Saturday, ESPN, 10:00 p.m. ET). 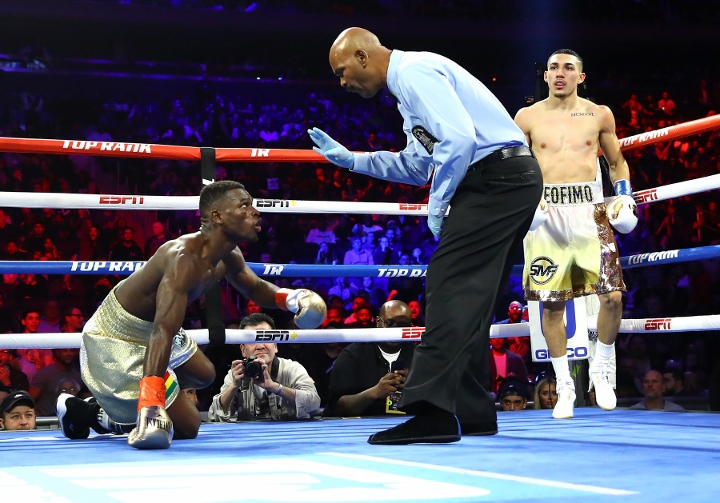 On the surface, it’s a fair claim. Ukraine’s Lomachenko (14-1, 10KOs) is a two-time Olympic Gold medalist with a 396-1 amateur record, and a pro career where all but one of his 15 pro bouts to date has been with a major title at stake.

“I understand that experience plays a big role and a big key,” Brooklyn’s Lopez noted during a recent Zoom media conference call to discuss the upcoming championship clash. “I definitely understand that. They said the same thing about Richard Commey. He had more years than me in the pro game and had way more experience. Look what happened.”

What happened was Lopez’s violent ascension upon the title stage. Just 14 fights into his pro career and coming off of an uneven performance in a 12-round win over Mashayoki Nakatani just five months prior, Lopez (15-0, 12KOs) rose to the occasion when it mattered most. Commey was flattened inside of two rounds in conceding his lightweight title last December at Madison Square Garden in New York City.

The 23-year-old Lopez now makes the first defense of that belt, in a fight where the winner will gain universal recognition as the one and true lightweight champion. Lomachenko is favored to win his sixth major title as a pro, spanning three weight divisions while gaining accolades as one of the sport’s best pound-for-pound boxers.

As for Lopez, the assurance comes that what fans saw last December was merely a preview of what to expect this weekend and moving forward.

“I’m just built different. I truly am. I’m just one of those fighters where it’s—what can’t Teofimo do. What can I not do? That’s what I’m very happy about. You people are only used to seeing me for three years. You still haven’t seen anything yet. I learn something new each and every day.

“You haven’t seen anything yet of Teofimo. You’ve only seen me as a power puncher. I have power in both hands. The thing is that my ring IQ is different. I think that’s what’s going to play a big role on October 17.”