The fast-rising lightweight contender produced another highlight-reel knockout, this time against two-time championship challenger Diego Magdaleno. The 21-year-old Lopez (12-0, 10 KOs) knocked out Magdaleno with two vicious left hooks in the seventh round at Ford Center at The Star, the Dallas Cowboys’ practice facility.

Magdanelo went down hard after Lopez uncorked a clean shot on him. The referee strangely started to count, but eventually waved an end to a bout that obviously should not have continued.

The time of the stoppage was 1:08 of the seventh round. 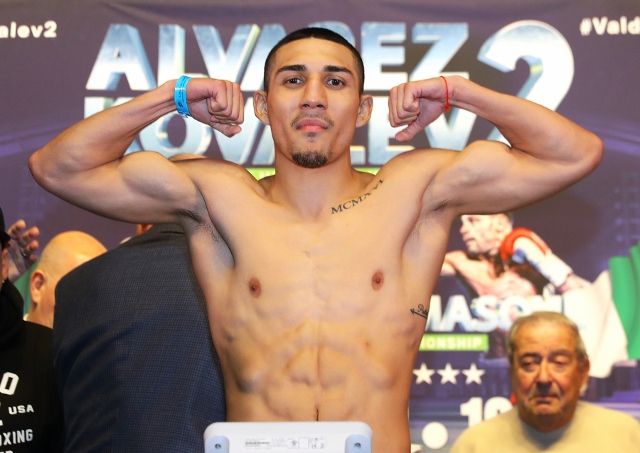 Lopez’s impressive victory was streamed by ESPN+ as the co-feature before Eleider Alvarez and Sergey Kovalev engaged in their immediate light heavyweight championship rematch.

Las Vegas’ Magdaleno (31-3, 13 KOs) lost by knockout for the second time in his 11-year pro career. Terry Flanagan stopped him in the second round of their October 2015 fight in Manchester, England, Flanagan’s hometown.

The last time the Brooklyn native competed, he needed just 44 seconds to score one of the most memorable knockouts of 2018. A devastating right hand by Lopez annihilated Mason Menard (34-4, 24 KOs), who was briefly knocked unconscious December 8 in The Theater at Madison Square Garden.

An aggressive Lopez spent the seventh round battering Magdaleno before uncorking those two left hooks that brought the bout to an end.

Lopez viciously clipped Magdaleno with a left hook that sent him to the canvas with 16 seconds to go in the sixth round. Lopez set up that crushing punch with a right hand to the body.

Magdaleno got up and valiantly fought his way to the end of the round.

Lopez wasn’t as accurate in the fourth and fifth rounds as he was earlier in the bout, but he was effective nevertheless.

After hurting Magdaleno badly during the second round, Lopez landed several hard lefts and rights in the third round. Magdaleno managed to land a right hook late in the third as well.

About 45 seconds into the second round, Lopez landed a left hook that knocked Magdaleno backward. About 20 seconds later, Lopez caught Magdaleno with a quick right uppercut that snapped back his head.

A cut also opened along the bridge of Magdaleno’s nose during the second round.

Lopez landed a straight right hand that backed Magdaleno into the ropes late in the right round. Magdaleno shook his head to indicate Lopez hadn’t hurt him, but Lopez’s power obviously began affecting him early in the second round.

[QUOTE=millcitymauler;19484091]The way Haney was getting touched up in his last fight, there is no way in hell his people put him anywhere near Lopez[/QUOTE] It's a classic boxer vs puncher. The way things are going n boxing these days, I…

[B][U][I]Proof you’re a casual:[/I][/U][/B] Teofimo Lopez hasn’t beat an elite fighter yet but you’re praising him as a great. He’s still untested genius. Yes you’re a casual. [QUOTE=mcdonalds;19485398]Do you think little loma can handle the counter punching ability combined with…

[QUOTE=SUCIO416;19485361]Please get the frrruck out of this sport you soft sentimental f4ggot[/QUOTE] There should be an age limit to post here. I swear.

Lopez looks good. The matchmaking has been pretty good for him and he got the stoppage late against Magdeleno. His antics and justification are pretty classless. Haven't seen his chin get tested but at some point he will lose and…