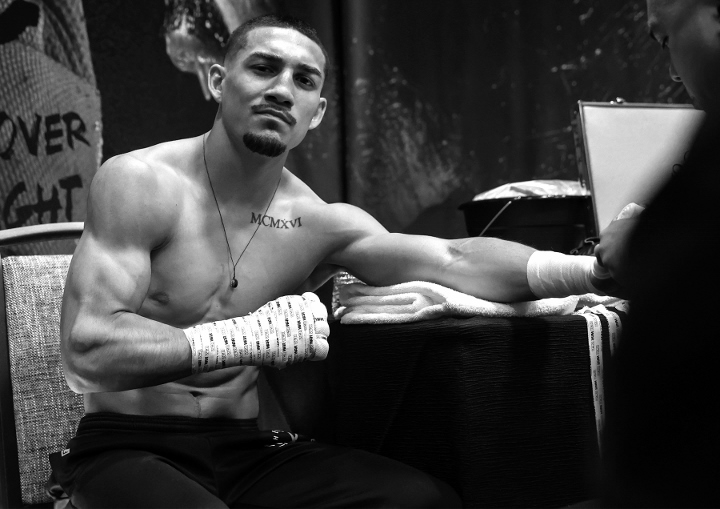 He hopes to return to the ring in March or April.

"[Fighting them next] is a possibility, it's just that they can't overprice themselves," Lopez said to Morning Kombat. "I didn't get what I would've gotten had this COVID not hit. I had to take a pay cut and I'm sure Loma did as well. Yes, money applies to everything and this is our career. We are putting everything on the line and we are jeopardizing that we might have to start from ground zero again if any of us loses.

Lopez rejected some of the chatter of placing Gervonta Davis on the pound-for-pound list - for last month's brutal knockout of Leo Santa Cruz in Texas.

To become pound-for-pound, Lopez has advised Davis and WBC champion Devin Haney to face a higher level of opposition.

"They tried to put [Davis] on the pound-for-pound list. Hell no! You have a lot more to do," Lopez said.

"My dude, you have to fight bigger and better competition and the same thing applies to Devin Haney. They are fooling the critics and the casual fans making [the Santa Cruz win] seem like a bigger fight, but it's not. These guys are supposed to win. It's all an illusion. You need fights that are 50/50 and it's a hit or miss fight.

[QUOTE=MoneyKasha;20889472]so any white fighter that is successful is "white hype" [B]was Wlad Klitschko a white hype?[/B][/QUOTE] Totally to the bold, until that gutsy performance against Joshua. First time ever I thought Wlad had guts and was any good. He turned…

[QUOTE=Mahdi77;20888423]Lopez you had an unemphatic win...people are praising ( primarily blacks and hispanics) who hated loma because they felt he was white hype. Shut the **** up. You are no living legend to be talking so much ****[/QUOTE] so any…

[QUOTE=Doubledagger;20883444]Haney has been calling him out, but Davis hasn't, and probably won't. He is under the Mayweather Protection...I mean Promotion Program.[/QUOTE] I dont think Lopez is scare of Haney, he just fought one of the best fighters in the world.…

Lopez you had an unemphatic win...people are praising ( primarily blacks and hispanics) who hated loma because they felt he was white hype. Shut the **** up. You are no living legend to be talking so much ****

[QUOTE=El_Mero;20887105]He didnt get lucky when he beat Loma. He actually beat him at his own game![/QUOTE] I never mentioned the word lucky. He's too new to be talking this much