Fight fans have waited long enough but one of the best matches that can be made in boxing will take place when Vasiliy meets Teofimo Lopez in a Las Vegas bubble.

The eyes of the boxing world will be on Brooklyn-born Lopez and Ukrainian superstar Lomachenko as they meet for the WBA, IBF and WBO lightweight titles.

And in Lopez’s corner, alongside head trainer Teofimo Sr, is Lewiston, Maine’s former world champion Joey Gamache. He’s Sr’s right-hand man and a hugely-respected trainer in his own right. Not only was he a successful fighter, but he learned from coaches including Teddy Atlas and Emanuel Steward, eventually becoming part of the Kronk set up.

He has a unique perspective on the contest having spent time in both camps.

“Absolutely it’s the biggest fight of the year,” said Gamache., “It’s a huge fight. People are buzzing about it, first, because of Loma and his background and all of his accomplishments but you know what? You’ve got a star like Teo and it’s like a star is born, like a Roberto Duran that comes out of nowhere and starts to show himself and people say, ‘Wow’.

“That’s what you’ve got there with Teofimo. You’ve got somebody who’s really special, a guy that’s got a great amateur background, who was National Golden Gloves champion, Olympic Trials champion, was in the Olympics, a real good fighter that hasn’t been see like Loma, who’s had a lot of exposure. A guy like Lopez has been in the backseat but he’s arrived.”

Gamache, who also works with heavyweight contender Otto Wallin, was invited to join Team Lopez by manager David McWater after Lopez was unspectacular in a bout with Masayoshi Nakatani. Joey believes that, despite Lomachenko’s vast experience, he’s never been in with anyone like Lopez.

“I will tell you this, he [Loma] hasn’t seen anyone with Lopez’s power, for one, and the way that Lopez knows how to use that power, his speed, his footwork, his defence,” Gamache said. “A lot of people have judged him by that Nakatani fight but he was distracted. You could see him looking around in the crowd and he had family problems, his wife and his sisters weren’t getting along good so he didn’t shine. But at the same time he fought a good, solid fighter, big guy, about 6ft, and that’s when I came in. We went into camp, we got ready for [Richard] Commey and the father’s the head trainer and I’m the assistant trainer and the father’s done a great job with him, really. The kid’s a natural fighter, he’s talented, high boxing IQ, very smart, he’s got everything. When you look back at a Roberto Duran you see the moves, he wasn’t just an offensive fighter he was a defensive fighter and he could do so many things but he was ‘Hands of Stone’ and he had the power and this kid, man can he punch.” 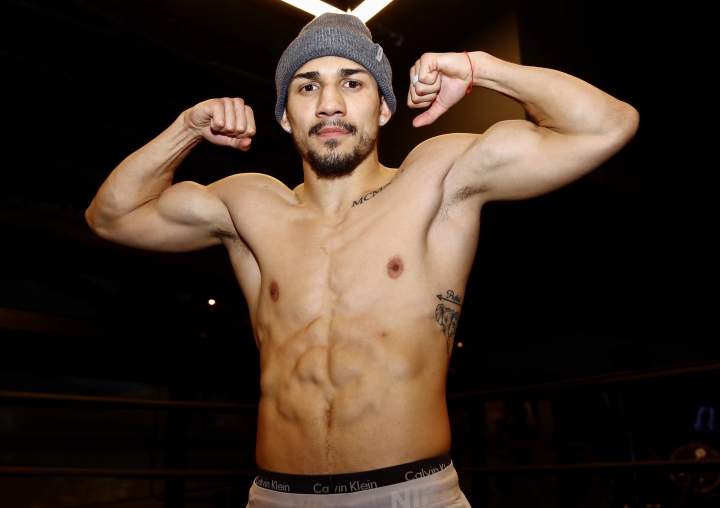 Several years ago, Gamache worked behind closed doors with Lomachenko as the former two-time Olympian found his feet in the pros.

“His first fight, I was working for Sauerland in Europe and I went to his first fight – I got there the day before so I didn’t spend much time there and the next fight with [Orlando] Salido I think I was there maybe eight days, a little over a week, and we did some mitt work, but of course, the father was the head trainer,” explained Gamache. “So I got to know Loma, don’t get me wrong, but I wasn’t there like I’ve been there for the Lopez camp. For the first camp we were together for about seven-eight weeks, this fight has been eight weeks so I’ve spent much more time with Lopez.”

Gamache, while clearly supporting his man, is quick to acknowledge Lomachenko’s Hall of Fame credentials. He’s 14-1 but a lock for Canastota.

“Of course he’s special,” admitted Gamache. “He won two Olympic gold medals, you look at him and you see a Willie Pep, you see that greatness there, you see a lot of special attributes with him, everything that he does; his speed, wearing guys down, his boxing ability, his defence, so he’s been a special guy for sure. [But] I see it as the right time, he [Teo]’s got a lot of years in this game too. He had a big amateur career as a kid, he had about 170 amateur fights with a lot of big accomplishments, I just think the kid is a phenomenon. He’s one of those kids that if you see him on TV and you say ‘Wow’. He catches your attention, and he hasn’t got the exposure Loma’s got because of the background but I’m telling you the kid’s special. If I was Lomachenko and his camp I would say, ‘Hey, we don’t need this fight. This is the wrong fight for you’.

It’s a bout that has captured the imagination of the sport’s fans, a demographic that has been short on megafights in 2020. But here, they have one.

“I would make Teofimo favourite and not just because I’m with him but because I know him,” Gamache continued. “The things that he can do nobody has seen, he’s had great sparring and I’ve really watched and studied him and I’ve watched a lot of Lomachenko and studied him and Loma gets hit and believe me he is going to get hit in this fight and it’s going to change everything. But we aren’t just relying on power because this kid’s got speed, timing, footwork, he’s got defence, he’s a smart fighter. He’s very special. I feel like as long as it lasts I see an exciting fight. He [Teo]’s too big a puncher, he’s too hungry, he doesn’t fear anybody. He’s just so ready and a real professional. And he wants to hurt Lomachenko. He has bad intentions. He doesn’t like him and he’s got that killer instinct. He wants this fight and there’s a lot of dislike between him and Loma and the fathers.”

Some fights become big because of grudges. But this fight is a fight regardless of any disdain between the camps. Actually, it’s one better than that, it’s a superfight.