Could Televising Boxing On Weeknights Become A Regular Thing Again?

“ESPN’s boxing was must-see television back then,” Arum told BoxingScene.com. “Everybody watched it.”

Everyone that watches boxing regularly these days has grown accustomed to the sport mostly airing on Saturday nights. Some networks broadcast lower-profile fights on Friday nights, but the vast majority of boxing is televised or streamed on Saturday nights.

Weeknights were once the norm for even boxing’s biggest events, fights that required fans to leave the house to watch at closed-circuit locations.

ESPN’s initial Top Rank franchise ran from 1980-96. “Tuesday Night Fights,” which aired on USA Network from 1982-98, also was a popular series for much of its run.

After about 25 years of operating largely as a Saturday night sport, ESPN will bring live boxing back to weeknights next month.

Two of Top Rank’s first three ESPN cards will air on weeknights, on a Tuesday night (June 9) and a Thursday night (June 11). ESPN is expected to air at least one weeknight show per week thereafter through July.

Weeknight boxing is a pandemic-related necessity as networks desperate to televise live sports want that content every day. As a niche sport, boxing also will have to take whichever nights of the week that are available when networks that air other professional sports start broadcasting those games again as COVID-19 restrictions loosen.

Arum hopes, however, that the ratings for fights on weeknights are good enough to encourage ESPN executives to continue airing at least some boxing on non-traditional nights in the long term.

“Everything is possible,” Arum said. “We’re exploring, in effect, an all-new world. Out of that exploration may come some added benefits, like the fact that boxing can once again be a middle-of-the-week sport.”

Showtime televises its “Showtime Championship Boxing” series on Saturday nights and its “ShoBox: The New Generation” series on Friday nights. Stephen Espinoza, Showtime’s president of sports and event programming, is considering offering fights on different nights of the week once that premium cable channel starts televising boxing again in July.

“I absolutely believe that we should experiment,” Espinoza said. “You’re seeing it across a variety of different sports. The NBA is looking at adjusting their schedule to maybe make it later and shift it out of the NFL season. Major League Baseball may be experimenting with expanded playoffs. So, I think this is a great opportunity to test out radical changes. We’re going through a period that is unlike any other, and we should adjust and experiment, and use this as an opportunity to try to improve and elevate the sport.

“This is certainly a difficult time for a lot of people, but it also presents opportunities to evaluate the way we do things – whether it’s the way we work in an office building or the way we produce and present boxing events. So, absolutely. I think everything’s on the table. We should experiment as much as we possibly can.” 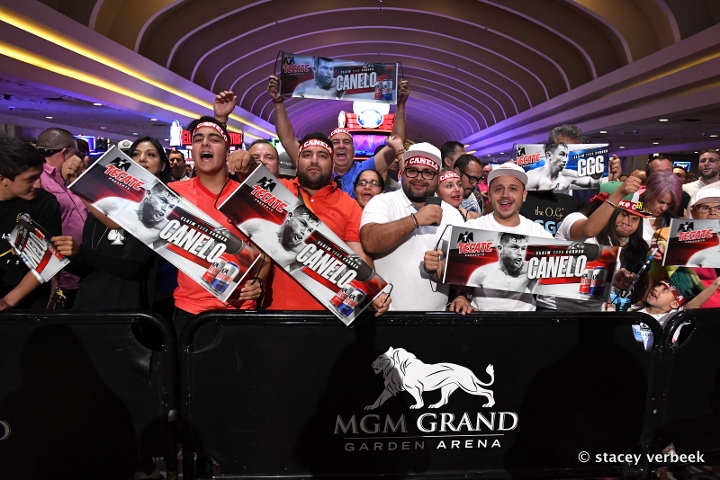 Promoter Lou DiBella has been a longtime advocate of bringing boxing back to weeknights at least in some capacity.

DiBella’s “Broadway Boxing” cards always take place on weeknights, as do most of the shows his company provides for UFC Fight Pass. The former HBO executive had already pitched a weeknight series to DAZN executives before the coronavirus crisis brought boxing to a standstill in the middle of March.

“I’ve always thought weeknights work for boxing, but particularly when you don’t have a fight with a giant gate,” DiBella said. “The kind of fight people are paying a thousand dollars a ticket for or whatever, we know those aren’t the kinds of fights you’re gonna put on a Monday or a Thursday. For years and years, some of the big heavyweight championship fights and other big fights were on weeknights. But today, with casinos and destination venues, when we get back to people paying big money to go to a fight, you’re probably looking at the majority of the big fights still being on a weekend.”

Arum admits the highest-profile fights still will be scheduled for Saturday nights because promoters need the ticket revenue. The 88-year-old promoter completely agrees with DiBella, though, in that boxing is missing opportunities to broaden its viewership by not airing fights on nights when more people are likely to watch.

“If you wanna get the biggest ratings, you get those ratings on a weeknight, when people are home,” Arum said. “You lose a lot of impetus by not going during the week because the TVs in use on Saturdays are the lowest of any night of the week. Clearly, that’s when people are out and about, and you don’t get the same kind of audience that you do during the week. But it’s been very hard for boxing to do a show during the week because you’re competing against other sports, you’re competing against other [televised] entertainment and you’re also going to get a smaller gate.

“If you do a fight on a Tuesday night or a Thursday night, you’re not gonna do the same [ticket sales] as a fight that went on a Saturday night. People have to work the next day and all of that sort of stuff. It’s a tradeoff, but I think it’s gonna be great for boxing to be able to put on shows in the middle of the week, when we can count on the biggest audiences possible.”

He hopes he is wrong, but DiBella doesn’t expect boxing’s new normal to include weeknight fights. DiBella believes televising and streaming fights on weeknights will serve a temporary purpose on the post-pandemic sports landscape before becoming almost strictly a Saturday night sport again.

“Do I think it’s gonna stick?,” DiBella said. “No. The reason they’re going on weeknights is because this isn’t designed for gates, where people would fly away to a casino for a weekend. We’re going to studios or to non-audience situations, so all of a sudden, now a Monday is a Saturday. It doesn’t matter. It’s not an average work week, where you’re concerned about people leaving work and coming to your fight. Now it’s people going home and watching TV.

“And for the most part, most people are still gonna be home most of the time. And the ones that are working [away from home] are gonna be home a lot of the time. They’re not gonna be, for the most part, in bars and restaurants. So, it doesn’t really matter. I don’t think it means anything for the future necessarily. But I’ve always been a big proponent of going on weeknights.”

Maybe this could help boxing get away from the casino shxt too. Never understood why people would trust a sporting event that takes place where everyone's gambling on it. Sporting events should happen in arenas, stadiums, & theatres made for…

[QUOTE=Oldskoolg;20574698]Yes I miss USA Tuesday Night Fights. Never missed it and it needs to come back. ESPN and PBC really need to bring back boxing during the week and on Saturday afternoons[/QUOTE] Absolutely, I'm pretty sure the first time I…

Tuesday night fights Friday night fights Although they had horrible numbers maybe this time around it can succeed Obviously with better fights cards Maybe even attracting some casuals Wishful thinking ?

Yes I miss USA Tuesday Night Fights. Never missed it and it needs to come back. ESPN and PBC really need to bring back boxing during the week and on Saturday afternoons

I am going to keep in mind that we are talking about promoters. And they are a dif animal. yet circumstances as they are they may be forced to do things that will benifit the fight fan in some of…