It’s been a long seven weeks but a period which was ultimately worth the wait for Patrick Teixeira and Brian Castaño.

Tireless efforts between their respective handlers produced a reached agreement for their junior middleweight title fight, just in time to avoid a World Boxing Organization (WBO)-ordered purse bid hearing which was due to take place Wednesday morning at Nautilus by Arlo Hotel in Miami Beach, Florida. 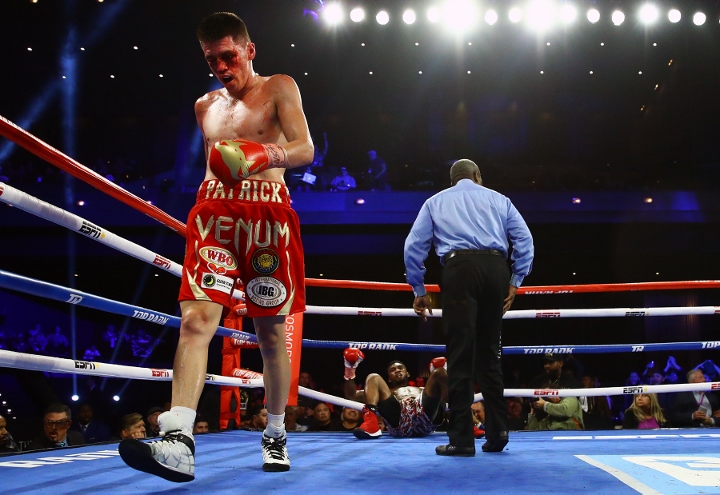 Terms were not disclosed for the WBO-ordered title fight, which will mark the first defense for Brazil’s Teixeira (31-1, 22KOs). The bout was originally ordered during the WBO convention last December 4th in Tokyo, where Teixeira was upgraded from interim to full 154-pound titlist just days after his 12-round win over Carlos Adames.

From there came a lengthy stretch of negotiations between the two camps, which benefited from two separate delays before a purse bid hearing was eventually ordered.  Teixeira was represented in negotiations by youngest-in-charge 24-year old manager Patrick Nascimento and Golden Boy Promotions. The tandem worked with TGB Promotions’ Tom Brown on behalf of Premier Boxing Champions (PBC), along with Castaño’s longtime manager Sebastian Contursi.

Golden Boy and PBC generally don’t conduct a lot of business together, though have done so when the situation arose and made sense to both parties. The two proceeded without issue for a junior featherweight title consolidation clash between Rey Vargas and Tomoki Kameda last summer, and more famously joined forces for the May 2017 all-Mexico superfight between Saul ‘Canelo’ Alvarez and Julio Cesar Chavez.

Given the recent weeks’ worth of talks and the 11th hour deal, it clearly made sense here as well.

Teixeira will attempt the first defense of the title he initially won in interim capacity following a 12-round decision over Adames last November in Las Vegas, Nevada. The Brazilian puncher was upgraded to full titlist less than a week later, advanced upon the vacancy left behind by Mexico’s Jaime Munguia, who abandoned his title reign in favor of a middleweight run.

Castaño is a former secondary titleholder with the World Boxing Association (WBA), having vacated the belt this past summer after scrapping plans for a mandatory title defense rematch versus France’s Michel Soro. The two fought in 2017, with Castaño winning a decision but his team having to take Soro’s handlers to court in order to get paid.

The lack of financial assurances or sufficient drug testing was enough to prompt Castaño’s team to bail from history threatening to repeat itself, thus opting to give up the belt. He’s since fought in November, scoring a one-sided injury stoppage win over Wale Omotoso in a bout with a WBO regional title at stake. It was enough to keep his place high among the sanctioning body’s rankings, and slide into the number-one position following Teixeira’s aforementioned win over Adames.

Thanks to extended cooperation between all parties involved, Teixeira and Castaño now get to slide into a future title fight together.

I think Castano takes it... if he does, PBC will own all the titles at 154, leaving the door open for undisputed.

Teixeira has improved more muscle mass than when he was 25. Like vs Stevens he looked way skinnier than his recent 154 bout. Regardless of draining, he’s much more agile and athletic than before. Before he would fight all lanky…

A PBC fighter fighting a golden boy fighter for the WBO

Ive only seen the Brazilian once, and that was when he got merked in a round by Curtis Stevens, im not sure how much he has improved or how much you can make of him beating Carlos Adames, considering he…