Team Parker On Chisora: All We Want Is Fair Fight, Fair Terms

Joseph Parker hopes his next fight in the United Kingdom fares better than his previous two, even as his team is already experiencing déjà vu on the business side.

The former heavyweight titlist from New Zealand is in advanced talks for a clash with veteran heavyweight contender Dereck Chisora, with such a bout being eyed for late October in London, England. News of the potential bout was revealed during a meet and greet between Parker and local reporters in New Zealand at Auckland Airport prior to the rebounding contender departing for the United States to open training camp.

The two heavyweights have discussed such a fight all summer, more so after Chisora (31-9, 22KOs) tore through Poland’s Artur Szpilka in two rounds this past July at O2 Arena in London, which is rumored to host this long-discussed pairing as well.

“I want Joseph Parker, bring him on,” Chisora stated immediately after picking up his second win of 2019.  “Let’s hope that Australian chicken doesn’t go ducking.” 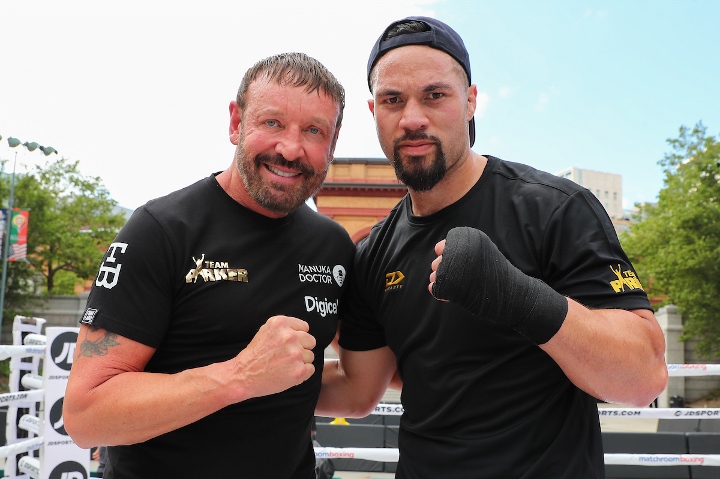 Parker (26-2, 20KOs) and his team have been open to the fight or any other of note following his latest win, a 10th round stoppage of Alex Leapai this past June in Providence, Rhode Island. The bout marked his first under a new pact inked with Eddie Hearn’s Matchroom Boxing outfit along with sports streaming platform DAZN-USA. Both would be intimately involved in this fight, as Hearn is also Chisora’s promoter and personally expressed his willingness in staging such an event this fall.

Despite such a fight being perceived as an in-house arrangement, talks have proven contentious at least in the eyes of Team Parker.

“It's pretty close to being done,” David Higgins, Parker’s manager and longtime local promoter told Sky Sports of the current state of negotiations. “It's been talked about for months and we finally received an offer yesterday which we will accept. The email we received is for October in London and we will take it.

“It has been hard to get a deal done, (Chisora’s manager, former World cruiserweight champ and heavyweight titlist David) Haye and Hearn talked a good game but they've simply left us waiting. We wanted the fight in April, but we ran out of time, Joe wouldn't have been able to have a proper training camp. We have tried to be polite behind the scenes but it's been difficult.”

Parker claimed a portion of the heavyweight title in a Dec. 2016 points win over Andy Ruiz when both were unbeaten contenders. Two successful defenses followed, including his first of three straight fights in the UK when he outpointed Hughie Fury in a Sept. 2017 title fight in Manchester, England.

Six month later came his first career loss to then-unbeaten Anthony Joshua in their March 2018 multi-belt unification clash in Cardiff, Wales. Parker had a better go of it in his next fight, albeit still coming up short in a 12-round loss to Dillian Whyte last July at O2 Arena.

Two wins have followed, although a clash with Chisora—also riding a two-fight win streak since his own repeat loss to Whyte last December—would mark a return to the contender level as he eyes a second title run.

What they’re hoping to avoid in the meantime is a repeat of his three previous UK road trips.

“We've been in the UK on three occasions now, we had a big disagreement over the referee when fighting Hughie Fury, then against Anthony Joshua, the ref was on their team, he would never let Joe get up close and protected 'AJ' throughout,” claimed Higgins.

Italy’s Giuseppe Quartarone was the referee for the aforementioned Joshua-Parker unification clash, drawing heavy criticism for his poor handling of a fight of that magnitude. The over-involved third man frequently separated the two even when free to fight, at times even during the middle of an exchange.

The worst of his offenses came in round nine, when Joshua literally called timeout to remove dangling tape from his glove. The tactic even drew a fitting reaction from Whyte at ringside: “This referee is useless.”

Of course, not as much was admitted by the Brixton-based heavyweight when he was the benefactor of a 2nd round knockdown in his close win over Parker, despite replays clearly showing a clash of heads as the cause for the fall.

“Last year against Whyte, Joe received a concussive headbutt which was somehow called a knockdown,” notes Higgins, although none of which seem to discourage Team Parker from still returning to the area. “If that's called correctly, the fight ends in a draw. Of course, we expect the opposition to again behave like dogs, all we want is a fair fight with fair terms.

“If I'm a conspiracy theorist, Chisora's team are trying to get an advantage, they want him to be the A-side, but we think Parker, who has the better win record, deserves it. He's also now a Matchroom Boxing fighter. If it's Chisora-Parker or Parker-Chisora, we really don't care.”

Chisora is the type of fighter Parker needs to beat, and he needs a win badly.

Chisora is refusing to sign up for WADA, so fight might not happen. This is Team Parker only condition to take the fight. That is as good as confessing to doing PEDs. Chisora has been looking much fitter.

The ref stopped AJ from working in that bout too, just a poor ref all around

[QUOTE=saintpat;20017625]Don’t bother if it’s in the UK. They wouldn’t tell Parker if the hometown lad showed up with a hose pumping pure anabolics thru his system as a transfusion.[/QUOTE]yea sadly to say your right.if Parker's not careful he'll be fighting…

They have a point about the refs to be fair. Ref for the aj fight wouldnt let them work inside . Ref for the whyte fight didnt just get the headbutt call wrong whyte got away with alot of rough…