On Monday, Dereck Chisora sensationally threatened to pull out of his fight with Joseph Parker.

The heavyweights are due to clash in London on October 26, exclusively live on Sky Sports Box Office in the UK and DAZN Stateside. 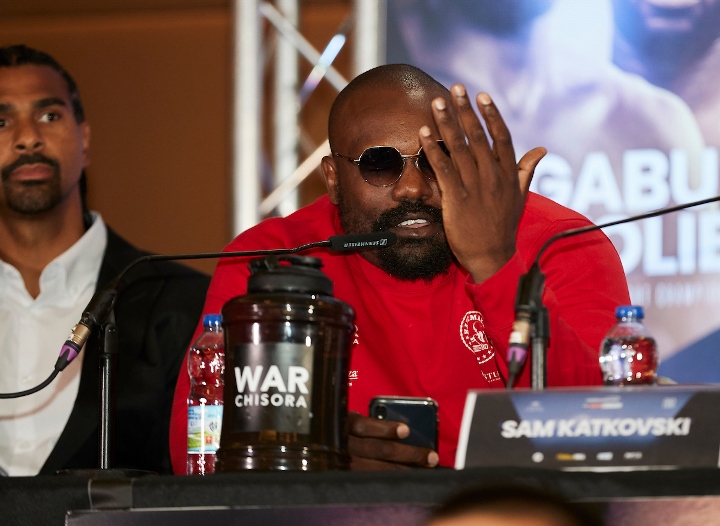 The Scot will put his IBF crown on the line against the man from New Orleans, who has the WBA and WBC Diamond belts, while the vacant Ring Magazine bauble will also be at stake in the World Boxing Super Series tournament final.

“Who's the main event of this fight?” Chisora, who revealed that he will no longer be trained by Dave Coldwell, asked at the launch press conference for the showdown at the O2 Arena in the capital. “I'm not selling out the O2 to main event for these boys.

“No cares about the Muhammad Ali trophy [which will be awarded to the winner of the Taylor vs. Prograis clash]. If I'm not going to main event, I want more money or I'm pulling out the show.”

"Yeah I agree. Parker-Chisora or Chisora-Parker as the Brits like to call it is a bigger attraction commercially, in terms of tickets sold at The O2 and viewing figures. It depends on how you are making the decision," Higgins said to Sky Sports.

"Technically it [Prograis vs Taylor] is more elite in terms of titles, but in terms of fan favourites and exciting boxing matches, Parker-Chisora is the bigger event, so I agree with Chisora.

"That being said, our side don't really care as much. Joseph has never been one to have ego issues, or worry about stuff like that. He knows what the job is and it will be to punch Chisora in the face, and shut him up."

Chisora knocked out Artur Spzilka in his last fight at the same venue back in July.

And he will return with the hope of doing a similar job on the former WBO world champion Parker.

The New Zealander, 27, has two wins on his record since losing to Dillian Whyte at the O2 Arena back in July 2018 when he challenged for the WBC Silver and then-vacant WBO International heavyweight titles.

Details regarding the new training setup of Chisora, who is managed by former world champion David Haye, will follow in due course.

[QUOTE=Buggy bear;20048306]2nd or 3rd tier heavys in the states who are better than chisora don't get anywhere near the chisora is lucky to get so he should be quiet fight and take yet another opportunity that he is lucky to…

There is a clear and obvious reason the Parker - Cheezyora fight is not the main event.. They both are not very good. Sorry to say it but true. I wouldn't go see them fight if it was in walking…

This is a DAZN fight and Chisora vs Parker is not a DAZN headliner. Not going to get American boxing fans to tune in to watch those two. No one would care is Parker and Chisora don't fight each other…

Was this realllllly a thing doe or just an act by Del Boy. Cuz I find it hard to believe Del Boy didnt know he was the co-main to this fight coming in + knew his pay. So his stance…

Since when has losing got you on the main event of a boxing card. Joseph coach and Derek are having deluisions of grandeur.