Alberto ‘Explosivo’ Machado is not only eager to avenge his lone career defeat, but is willing to return to the scene of the crime in order to accomplish the feat.

Talks remain ongoing for the former 130-pound titlist from Puerto Rico to run it back with his conqueror, newly crowned title claimant Andrew Cancio. The rematch—should it happen—will take place June 8 at Fantasy Springs Casino in Indio, Calif., where Cancio rose from the canvas to stop a weight-drained Machado in four rounds this past February.

The bout is not yet finalized, but also not on the verge of falling apart as speculated elsewhere in recent days. 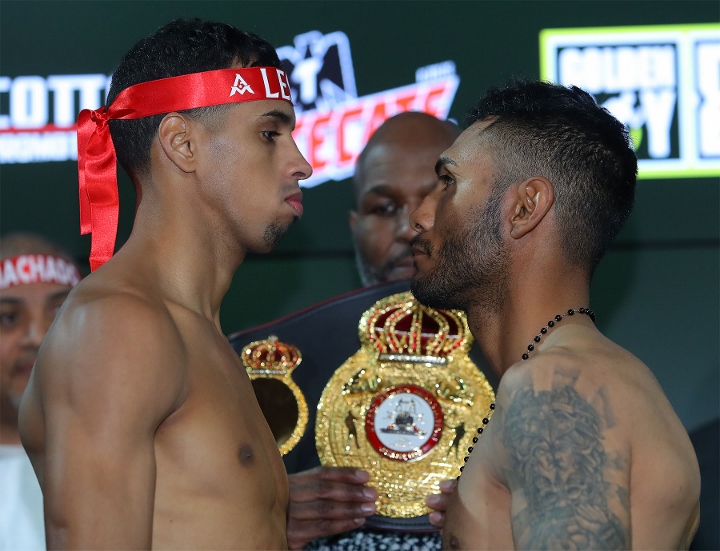 “We are going to have a meeting with Alberto Machado to discuss his next steps,” Bryan Perez, vice president of Miguel Cotto Promotions—Machado’s co-promoter along with Golden Boy Promotions—told BoxingScene.com. “If we can get the rematch done, it will take place in Indio.”

Cancio (20-4-2, 15KOs) will defend his title on the date, regardless of opponent. The 30-year old from Blythe, Calif. has emerged as boxing’s latest feel-good story, taking on a full-time as a construction technician for Southern California Gas Company after stepping away from the game in 2016 following a knockout loss to Joseph Diaz Jr.

Three wins have followed since his ring return last April, none bigger than his massive upset over Machado (21-1, 17KOs) earlier this year. Canclo had to climb off the deck to do so, managing to recuperate quick enough to overwhelm the previously unbeaten titlist in their February bout on DAZN.

The passing of the torch was eerily similar to the manner in which Machado won the title. His violent ascension to the top came in an  8th round knockout over Jezreel Corrales whom had already conceded the title at the scales after missing weight.

Waiting in the wings for Cancio should a return go with Machado not materialize is yet another potential rematch. His current mandatory challenger is Rene Alvarado, whom Cancio stopped in the 8th round of their Dec. ’15 meet in this very venue where the reigning titlist boasts a 9-1 record.

For now, though, he should remain focused on the man from whom he lifted the title—since revenge very much remains the plan on the other side of the equation.

“After the fight, there was talk of Alberto moving up to 135, with the concern of how he had such a difficult time making weight,” Perez admits. “But as far as he’s concerned, the rematch (with Cancio) remains his first option.”

Sounds like they can't be too excited about a rematch, & why should they be, based on this news of a rematch still being option 1. Seems like if its option 1 the rematch is scheduled by now. Obviously there…

[QUOTE=Kannabis Kid;19651290]Your stupid sig claims not a single Mexican beat Trinidad but his cheating ass got outboxed by a Mexican and got a gift. Yeah its the past yet you still have it on your sig.[/QUOTE]enverda?? Lol a kien le…

[QUOTE=PrBoxing88;19650878]what the fck u talking about?? Fcking idiot im not talkinf about De la coca or Trinidad. That's the past ******.[/QUOTE] Your stupid sig claims not a single Mexican beat Trinidad but his cheating ass got outboxed by a Mexican…

[QUOTE=Kannabis Kid;19643514]De La Hoya boxed the **** out of Trinidad and you know it and Hopkins destroyed him after he couldn't get away with his usual illegal hand wraps.[/QUOTE]what the fck u talking about?? Fcking idiot im not talkinf about…

Machado should move up in weight. Midget Pacman lose his 112 title to nobody but he did not look back and the rest is history!