Bill Haney believes he has the perfect opponent in mind. His son, unbeaten lightweight Devin Haney, was waiting for his mandatory crack at unified titlist Vasiliy Lomachenko.

In fact, it was the very same boxer they had in mind when they thought a title shot was in reach. 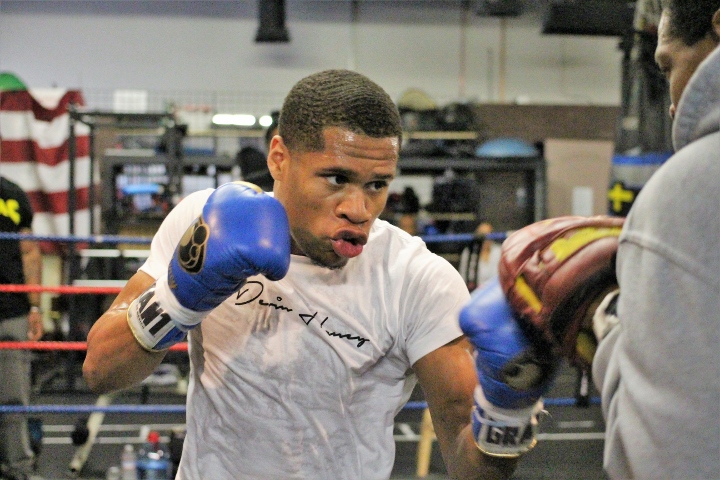 Haney (23-0, 15KOs) and England’s Campbell (20-3, 16KOs)—a 2012 Olympic Gold medalist—were once believed to be on a collision course for the vacant World Boxing Council (WBC) lightweight title. In fact, Las Vegas’ Haney signed a co-promotional deal with promoter Eddie Hearn’s Matchroom Boxing USA outfit of the belief that such a fight could be delivered given both boxers’ lofty WBC rankings at the time.

Hearn—who is also Campbell’s promoter—campaigned for such a fight, only to be told that Ukraine’s Lomachenko (14-1, 10KOs) successfully lobbied the sanctioning body to jump the line and fight for the vacant prize. Campbell was the number one contender at the time, which left Haney to instead settle for an interim title fight and the promise of facing the winner.

Lomachenko traveled to London to face Campbell, taking a clear cut 12-round decision to add the WBC title to his collection that already included the WBA and WBO belts.

“We didn’t hear nobody protesting, ‘Why can’t we just fight Devin Haney for this title?’” claims the elder Haney. “He wanted Lomachenko, right? So he got Lomachenko in his backyard. He showed Lomachenko was vulnerable, but he didn’t get in his ass like he should have, like he really wanted that mutha f---a.”

And just a few days ago, the WBC made an unexpected announcement - that Lomachenko would now become their "franchise champion" at 135-pounds, while Haney would be automatically elevated to the position of full champion.

Haney's first defense of the title is slated to take place on Nov. 9 in a supporting capacity to a rematch between YouTube celebrities KSI and Logan Paul, on DAZN, at Staples Center in Los Angeles, California.

An opponent has yet to be named, even though Petr Petrov has repeatedly surfaced as a potential frontrunner. The former title challenger is a formidable foe, but Haney and his team have even bigger game in mind.

“Listen, we’d love to have Luke Campbell come over here, and go right to that Staples Center and suit him up,” insists Bill Haney, undoubtedly aiming to target common opponents with Lomachenko for comparative purposes. “We'll chop him up easy.”

Easy fight to make as they're in the same DAZN household and street. We all wish Charlo could say the same to Derevyanchenko, a fellow PBC, who just called him out recently.

So Lomachenko doesn't want to unify all 4 belts anymore obviously.

“We didn’t hear nobody protesting, ‘Why can’t we just fight Devin Haney for this title?’” claims the elder Haney. “He wanted Lomachenko, right? So he got Lomachenko in his backyard. He showed Lomachenko was vulnerable, but he didn’t get in…

[QUOTE=1hourRun;20145439]Vasily Bumchenko had a close fight with this two time WBC loser Luke Campbell. Luke, like Bumchenko gets all the breaks ; this unearned opportunity reminds me of when Orlandoe Salido whooped Bumchenko in 2014 because the privileged euro-bum (…

[QUOTE=ShoulderRoll;20146870]You said they robbed Lomo to put a strap around Haney's waist. But it was Lomachenko's own promotional company that asked for the Franchise Champion designation and to drop the belt! Stop embarassing yourself.[/QUOTE] So If Top Rank said nothing…