A title shot awaits Steven Butler—if he and his team decide that’s the next best step for his career.

As previously reported, the World Boxing Organization (WBO) has assigned Canada’s Butler (28-1-1, 24KOs) as the mandatory challenge for unbeaten middleweight titlist Demetrius Andrade (28-0, 17KOs). The bout was formally ordered on Oct. 2, with the two camps instructed to begin a 30-day free negotiation period, with a purse bid hearing set aside for the first week of November in the event the two sides fail to reach terms.

Eddie Hearn’s Matchroom Boxing USA represents Andrade, while Butler is co-promoted by Golden Boy Promotion. Both outfits have come forward with a plan to discuss the fight, which they hope to stage in the 4th quarter of 2019.

“I’m interested in talking to Eddie Hearn,” Eric Gomez, president of Golden Boy Promotions told BoxingScene.com. “Let’s see if we can get something done. It’s a good fight.” 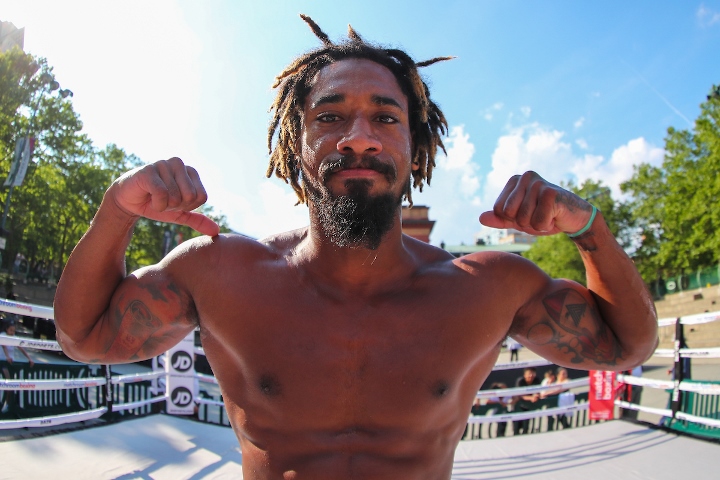 As much is believed by Hearn, who has told reporters in New York—while in town for another middleweight client, Gennadiy Golovkin’s vacant title bid versus Sergiy Derevyanchenko this Saturday at Madison Square Garden—that he is targeting a Dec. 21 DAZN date for the bout, which will mark Andrade’s third title defense.

It’s certainly not out of the question, but would also assume that Butler and his team are fully on board.

“We will sit down and evaluate,” Camille Estephan, Butler’s manager told BoxingScene.com.

Butler is currently riding a 10-fight win streak, including a 1st round knockout of Paul Valenzuela Jr. on Sept. 26 in his Montreal, Canada. The event was promoted locally by Estephan’s Eye of the Tiger Management company, which regularly stages successful shows in the boxing friendly region.

A title fight would be by far the most significant to date for Butler, a 24-year old knockout artist who is still less than six years into the pro ranks. He has regularly fought at middleweight since last February, having previously campaigned in the 154-pound division.

Whether or not his current stretch has prepared him well enough for the leap in competition is a conversation that needs to take place sooner rather than later.

“There are a few possibilities for Steven’s next fight,” points out Estephan. “We hope to take a decision quickly.”

[QUOTE=gspm23;20107688]As a Montrealer, I follow Steven since his very beginning. Yes, this kid is skilled and has power. I'd really like to think he'd have a chance against Andrade.. but it's not the case. They should avoid this fight as…

I'm from Montreal too, and I think he should take the money and run. Let's face it, the guy is never gonna be a top guy in any division, so... Take the deal, come out guns blazing and hope for…

[QUOTE=Mammoth;20107734]Passing on title shots is gay[/QUOTE] The other belt holders are avoiding Andrade and now his own mandatory might be avoiding him too. :lol1:

[QUOTE=gspm23;20107688]As a Montrealer, I follow Steven since his very beginning. Yes, this kid is skilled and has power. I'd really like to think he'd have a chance against Andrade.. but it's not the case. They should avoid this fight as…

if he doesn't want to fight for the title as the mandatory challenger remove him from the rankings and instate the next mandatory.