A press release distributed by Amanda Serrano and her team made it clear that she is not at all willing to take a paycut for a long-awaited superfight with Katie Taylor.

What still isn’t clear as of Monday afternoon, is whether the fight is canceled—as suggested by her team—or still moving forward as scheduled.

The record-setting seven-division titlist created a stir as their statement made the rounds regarding a currently-postponed challenge of undisputed lightweight champion Katie Taylor (15-0, 6KOs). Their bout has been targeted for at least four different dates in 2020, two of which were forced to be rescheduled due to the ongoing coronavirus pandemic.

While never announced, plans called for their superfight to take place August 15 as part of a card to be headlined by a heavyweight clash between Brixton, England’s Dillian Whyte and Russia’s Alexander Povetkin. The event is due to anchor a four-week ‘Fight Camp’ series to take place on the outdoor property of Matchroom Boxing’s headquarters in Brentwood, England. 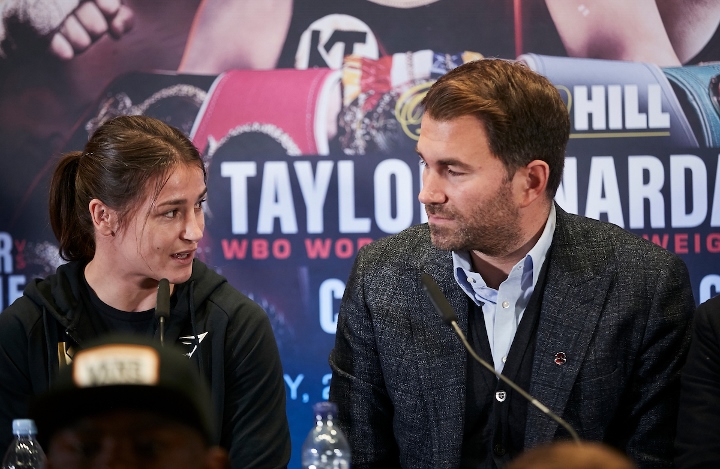 Both bouts were originally targeted to take place May 2 in Manchester England, with the date scrapping any previous talks of a Taylor-Serrano championship clash taking place earlier in the year at Madison Square Garden’s Hulu Theater. The May 2 date was one of many to get scrubbed from the spring schedule due to the global spread of COVID-19, with Eddie Hearn—managing director of Matchroom Boxing and Taylor’s career-long promoter—then announcing a rescheduled date of July 4 which has also been postponed.

Regarding the Fight Camp series, such events will take place without fans in attendance, in accordance with global health and social distancing protocols. Somewhere along the way came a conversation between Hearn and Lou DiBella, Serrano’s promoter about the Brooklyn-bred Puerto Rican southpaw taking a paycut from the originally negotiated offer.

From there, it didn’t take long for all hell to break loose.

“On four occasions, Amanda has signed on for the fight,” Jordan Maldonado, Serrano’s manager, trainer and brother-in-law noted in a statement released through their team’s personal publicist. “She signed to fight in late 2019 in New York, but Taylor opted to move up in weight (beating 140-pound titlist Christina Linardatou last November in Manchester, England). Then we accepted the fight for early 2020 in the same city, but Taylor’s team thought they needed more time to train and it was [moved to May 2 in England, but then a month and a half later, the COVID-19 pandemic came and it was moved to the 4th of July; all this, accepting a purse not up to par with the magnitude of the fight. But since Amanda wants to make history for Puerto Rico, we happily accepted.

“Now they’re offering us the fight for August but removing almost 50% of Amanda’s purse. However, they are taking less (of a cut) from Taylor. We understand there is a situation around the world with COVID-19 and there are changes in the boxing platform, but big fights are big fights. Many important fights are delayed until fans can come back to attend the events. If we accept this new offer, we’d be creating a new negative precedent in female boxing, after so many women have worked so hard to heighten the level of the sport.”

The statement was dismissed by both promoters involved in the event, denying on the record that the suggested paycut was anywhere close to the amount suggested by Serrano’s team.

That said, the sentiment was met with a sympathetic ear by the guiding force behind their pro career.

“Would you want to fight the biggest fight of your life, at your opponent’s promoter’s headquarters, in front of no one who knows or supports you, for a reduced purse?” DiBella asked, rhetorically, in response to an online suggestion that he was walking sideways from the development. “I’m not sure you would. And, no, this is NO ONE’S fault. These are trying times.”

One matter that was reiterated was the current deal in place for the fight to take place, however it needs to happen at this point.

“Amanda has a signed contract to fight Katie,” notes DiBella. “She trained for the Spring fight and it was postponed because of covid. She kept training because Matchroom rescheduled for early July; no one asked for a pay cut. She was, in fact, paid training expenses under contract. Yes, Eddie is trying to reschedule for late August, but he now wants a pay cut. As a promoter, I get it; there’s no gate. It’s Matchroom’s prerogative to ask.

“If Matchroom Boxing feels that the fight isn’t viable without a gate, then it’s Matchroom electing to wait. If you were managing Amanda, would you want to take a pay cut, that you aren’t obligated to take, to fight the biggest fight of your life literally on the grounds of your opponent’s promoter’s palatial estate? Amanda is pulling out of NOTHING. She and her team are exercising the free will to stand on her existing contract and turn down a reduced purse to fight Katie in Eddie’s backyard.”

The same conversation also prompted a response from the other side.

“No pay cut for Amanda - it’s on baby,” Hearn tweeted in reply to DiBella.

“I’ll be quite honest… it’s just a money issue,” Hearn explained of the lingering delay in moving forward with a formal announcement. “Katie Taylor really wants to take that fight. She’s geared up for that fight. She wants that fight badly. I think Serrano wants that fight as well, I’m pretty sure. But… we were about to do that fight in Manchester in front of 20,000 people. We’re now doing it in my backyard in front of zero. So, you can imagine the challenges. But I'm trying to find a way to make that happen.

“If I can produce Whyte against Povetkin and Taylor against Serrano on the same night, I think that’s a big night for the sport.”

Serrano (38-1-1, 28KOs) is the only boxer of the four to have actually fought in 2020. It came unexpectedly, taking a stay-busy fight on less than two weeks’ notice on a pre-Super Bowl card this past January in Miami, Florida. Serrano’s 3rd round stoppage of Brazil’s Simone Aparecida Da Silva took place prior to the DAZN cameras rolling for the Super Bowl-themed card, but was enough to move her career forward ahead of the biggest fight of her career.

Prior to the bout, Serrano ignited a second featherweight title run following a 10-round win over fellow Brooklynite and previously unbeaten titlist Heather Hardy last September in New York City. The win marked an eighth title run in seven weight divisions for the 31-year old southpaw, both marking records for any female as well as any Puerto Rican boxer—regardless of gender—in history.

The bout also streamed live on DAZN, which would presumably carry this event in the United States. The sports streaming service has not aired any live boxing since March 7.

Taylor—a two-time Olympian and 2012 Olympic Gold medalist from Bray, Ireland—has unseated four separate lightweight titlists on the road to her current status as undisputed champion. A win over Linardatou last November made Taylor—who turns 34 in July—a two-division titlist, though relinquishing the belt soon thereafter in favor of continuing her lightweight championship reign.

Despite the on-the-record acknowledgement by Hearn of the original deal remaining in place, word of Serrano and her team accepting terms as-is has yet to made public as this goes to publish.

[QUOTE=The D3vil;20626946]That's not what this is. Katie & Amanda are both quality fighters Katie & Amanda are arguably the best at what they do[/QUOTE] Amanda Serrano is a cherry picker. She wins vacant belts against overmatched club fighters, then vacates…

[QUOTE=Buggy bear;20626360]I agree to a degree but fighters who hand pick their opponents with padded out records I have difficulty respecting those, both male and female ..[/QUOTE] That's not what this is. Katie & Amanda are both quality fighters [QUOTE=Silver…

so hearn is saying serrano doesnt have to take a paycut, thats great i persume but who is taking hte cut then? taylor, hearn?

[QUOTE=The D3vil;20625531]Well, I for one, am interested in seeing the fight as I respect anyone who steps in a ring and is willing to devote themselves to a fighting career. :boxing:[/QUOTE] I respect most who step into a ring but…