Carlos Takam and Jerry Forrest did their best to save the show. Their in-ring action, however, proved neither entertaining nor engaging.

The heavyweight-headlined July 9 edition of Top Rank Boxing on ESPN averaged 299,000 viewers over the course of the two-hour, forty-seven minute telecast, according to Nielsen Media Research. The four-fight card reached a peak audience of 344,000 viewers, which came at the 10:15pm-10:29pm ET block during the headlining act which saw Cameroon’s Takam (39-5-1, 28KOs) score a 10-round decision over Forrest live on ESPN from the MGM Grand Conference Center in Las Vegas.

While among the lower-rated of the 12 Top Rank promoted and affiliated shows to air during the pandemic, the 10 stateside cards have served as the most-watched telecast on ESPN each weeknight they have aired.

Takam—a 39-year old heavyweight now residing in the greater Vegas area—accepted the assignment on less than two weeks’ notice. The former title challenger was a late replacement for disgraced heavyweight Jarrell Miller, who was scrubbed from the show after producing yet another positive drug test.

Forrest (26-4, 20KOs) remained on the card, though failing to seize the moment. The Virginia-bred southpaw came on late in the fight but was already too far behind on the scorecards to pull off the upset in a fight where bettors found him to be of considerable value in the underdog role. 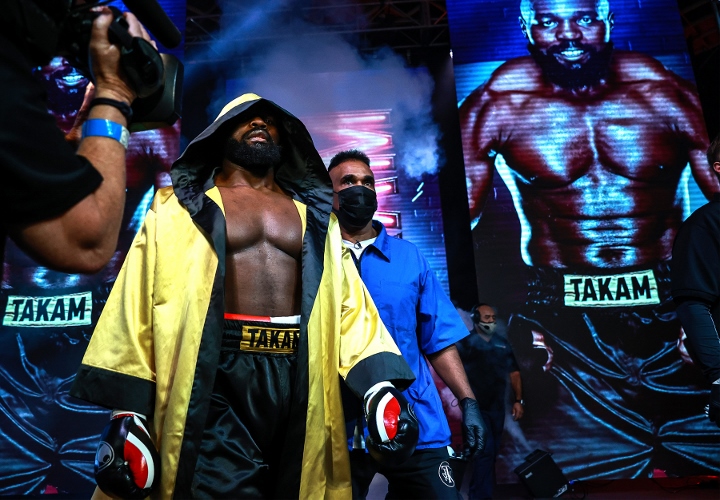 Their 10-round fight itself wasn’t nearly as active, a disappointment considering the undercard provided several memorable moments. It also speaks to Top Rank's commitment to proceed with its summer series and in particular Thursday's main event, with neither boxer fully promoted by the Las Vegas-based powerhouse. Takam primarily fights for Star Boxing and co-promoted by Top Rank, while Forrest was delivered to The Bubble by DiBella Entertainment.

In a far more competitive bout, Joshafat Ortiz (8-0, 4KOs) proved to be a prospect worth a second look. The epically-bearded Reading, Pennsylvania–based boxer prevailed via majority decision over Massachusetts’ Joshua Orta (6-1. KOs) in a hard-fought six-round matchup of unbeaten Boricua junior lightweights.

Before the telecast went live, came the evening’s most memorable moment.  Corey Champion (2-3, 2KOs) prevailed in a 1st round knockout over Peter Cortez (2-2, 1KO), scoring three knockdowns though hitting the deck himself.

The latter moment came as part of a rare double knockdown as both boxers landed simultaneous right hands. Champion landed flat on his back and Cortez losing balance before falling to deck. Champion appeared to be worse for the wear but managed to dig deep to put Cortez down a third fight to end the fight which made the ESPN SportsCenter highlight reel.

Thursday’s overall rating is the second-lowest of the Top Rank summer series in The Bubble, barely outpacing only the June 30 card headlined by Alex Saucedo’s 10-round win over Sonny Fredrickson which averaged just 298,000 viewers.

The next edition of Top Rank Boxing on ESPN features perhaps its most loaded show of the summer to date and with two of its bouts relocated from previous shows. It figures to also significantly reverse the trend of declining ratings for two straight shows.

Reigning WBO 130-pound titlist Jamel Herring (21-2, 10KOs) defends his crown for the second time as he faces Puerto Rico’s Jonathan Oquendo (31-6, 19KOs). The bout was originally due to air July 2, only for Herring to test positive for COVID-19 which resulted in the postponement.

Mikaela Mayer (12-0, 5KOs) suffered a similar fate, although far more of a victim as a false positive bounced her from the June 9 summer series premiere. The 2016 U.S. Olympian and current junior lightweight contender was able to find her way back to the bubble against originally scheduled opponent Helen Joseph in what will serve as the televised co-feature.

The July 14 show will also feature rising cult favorite Clay Collard (7-2-3, 2KOs) in a six-round middleweight preliminary contest versus Lorawnt T. Nelson (5-3, 4KOs). Collard rose to prominence in a Bubble appearance in a June 18 decision win over David Kaminsky. The victory was his third straight over an unbeaten prospect, all coming in an adventurous 2020 campaign for the Cache Valley, Utah product.

[QUOTE=Blueboy3;20651603]Why does espn waste money on these garbage cards[/QUOTE] I just cannot watch this garbage frank warren yesterday was much better

To me, these boxing cards give me what I appreciate the most, our belove boxing sport. :boxing:

[QUOTE=Blueboy3;20651603]Why does espn waste money on these garbage cards[/QUOTE] Why? Because they need live sports. These cards still do some of the best ratings for ESPN. Are they great? Of course not, but any live sports for ESPN is better…

[QUOTE=Beercules;20651610]I enjoy these cards. Better than nothing. Although I have been binge watching Two and a Half Men:lol1:[/QUOTE] :lol1: Sheen be winning.