The first four super middleweight matches in the World Boxing Super Series tournament were established during a draft gala Saturday night in Monaco. 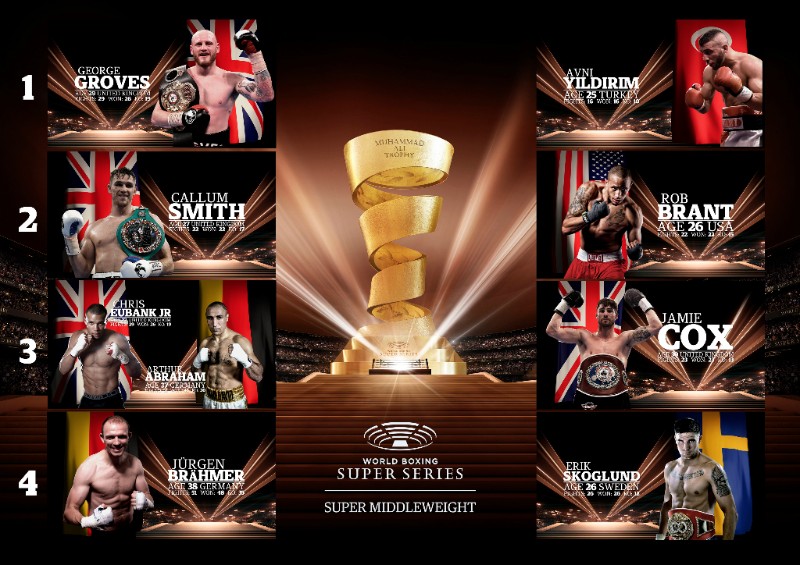 “Me and Jamie are old buddies,” Groves said. “We’ve known each other a long time now. I quite fancied a bit of a domestic dustup, wanted to pick my countryman. I knew he wanted to fight me. I provided him a great opportunity. He’s fighting for a world title. Also it’s a strategic move. It’s a long tournament and you pick the easy guys first.”

“I was looking forward to getting a UK dustup,” Cox said. “Obviously George picked me. It makes for a great fight. Time to bury a seed.”

“There’s four very good fighters to pick from,” Smith said. “I just think stylistically Erik’s the best fight for me.”

Skoglund added, “To kick off the quarterfinals fighting an undefeated, top guy for the WBC Diamond belt, it’s massive, and I couldn’t be happier with the choice.”

“Look at him – He’s massive and he’s a come-forward fighter,” Eubank Sr. said. “I don’t think he knows how to go back. He brings war, as does Arthur Abraham, which will make for a spectacular fight.  And once my son gets past Arthur Abraham, then [Yildirim] will bring him the same fight. But you may learn during the fight he has with Arthur Abraham, he will learn that it is not possibly the right method to use force. You have to use your brains to beat Chris Eubank Jr. He is an upgraded version of me.”

Yildirim said he was “very happy” with Eubank Sr.’s decision.

After the first three fights were made, the two remaining super middleweights – Germany’s Juergen Braehmer (48-3, 35 KOs) and American Rob Brant (22-0, 15 KOs) – were left to fight each other.

The final will be scheduled for sometime in May. The winner will receive the Muhammad Ali Trophy and substantial prize money.

[QUOTE=Pigeons;17842206]I feel like Brant got the best matchup he could have hoped for. As long as the size isn't an issue then he'll be in a great position to pull an upset over Groves in the semis.[/QUOTE] Yeah, Brant should…

My thoughts on the matchups: Groves will easily KO Cox, I like Smith to beat Skoglund, Yildrim is my sleeper, could see him beating either of Eubank or Abrahama and don't know what to think about the last 1 with…

How are the semi finals decided? Is there a structure to it or will it be at random because that could have a big bearing on who will win.

I bet joe gallagher got first dibs cause he wouldn't touch anyone with a pulse. He'd probably try and pick someone from the 90's and fight for one of their belts. Snr must have had no say in this cause…

I feel like Brant got the best matchup he could have hoped for. As long as the size isn't an issue then he'll be in a great position to pull an upset over Groves in the semis.