You reached Sunday night with consensus acclaim – thanks to a resume dotted with title fights and a mantel stocked with championship belts – as one of the world’s best 122-pound boxers.

But something important was missing.

A string of promoters and TV networks have failed to recognize your drawing power, and the majority of words written heading into a title eliminator against Julio Ceja focused less on a career’s worth of preeminence and more on a chasm between your skills and the sensibilities of mainstream boxing fans.

The lack of appreciation was so vast, in fact, that your fight was again relegated to undercard support beneath another with neither a championship nor a pound-for-pound mention to be had.

What you needed most, it seemed, was a game-changer.

And what do you know? Over the course of eight rounds, it arrived.

By the time Jimmy Lennon Jr. wrapped up the official proclamation of Rigondeaux’s one-punch erasure of a 26-year-old Mexican with 28 KOs in 32 wins, the chatter surrounding the once-beaten Cuban-born champion (with stoppages in five of his last six wins, incidentally) had turned from flaccid to ferocious.

Oh sure, a lot of it centered on the borderline nature of the referee’s decision to end the fight – Ceja rose from a wicked left hook before Russell Mora abruptly waved him off – but, in reality, that was beside the point. 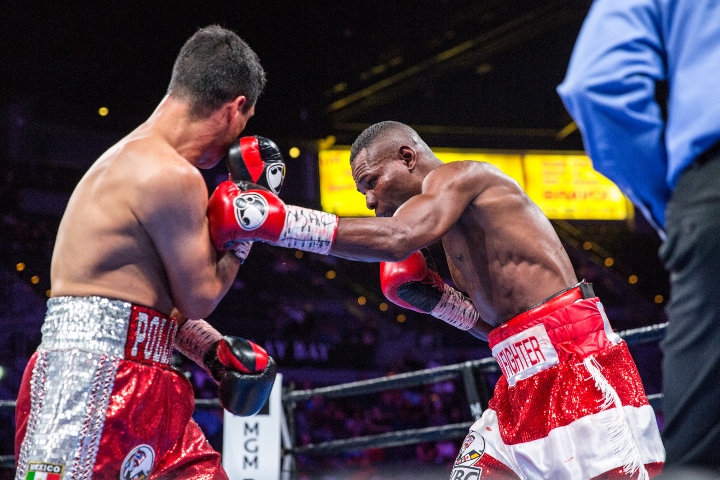 In a no-publicity-is-bad-publicity world, he had clearly become the center of attention.

And on the Fox TV announce crew, only Joe Goossen seemed to see it coming early on.

“I think he’s biding his time,” the veteran trainer/analyst said in Round 5. “He’s gonna try to land some hard shots, break Ceja down and maybe take him out in eight or nine rounds.”

While some eventually dissected the Mora replay with Zapruder zeal and branded Rigondeaux’s fight-long decision to stay in the pocket and rumble as evidence his once elegant legs are compromised, others defended the usually ignored fighter's approach by suggesting the choice to stand and fight was simply made to generate the raves he’d long deserved but never gotten.

Rigondeaux gave a clear indication of his mindset following the fight, suggesting in a mid-ring interview that he’d been unfairly branded as a runner and entered the fight with a script-flipping agenda.

“People were saying in my fights that I get on my bicycle and I run a lot. Well that’s not true,” he said.

“I showed today that I can fight at short distance. I did it. That was the game plan.”

It remains to be seen if previously moribund television ratings will soar now that the longtime stud has made his switch from sublime tactics to full-on violence, but it’s not inconceivable to think the buzz surrounding Rigondeaux after Sunday will make his next appearance a must-see proposition, too.

That’s surely what the Premier Boxing Champions conglomerate is hoping, having joined forces with the veteran for his return in January following several years in promotional limbo.

He’d been Top Rank property through the summer of 2014, then danced with other partners before returning to the Arum fold for an ill-advised tango with the other-worldly Vasyl Lomachenko at 130 in 2017. The six-round schooling sent Rigondeaux to the shelf for 13 months before PBC came calling.

Now, having earned a WBC title shot with the Ceja win, it’s probably a matter of time before incumbent Rey Vargas becomes the top name on Rigondeaux’s new hit list. Vargas works with Oscar De La Hoya’s Golden Boy Promotions, and his next defense is set for July 13 on a DAZN show from Carson, California.

If logic dictates and Vargas retains, the phone call comes by mid-July. And if all it took was a walk on the wild side to get it made, all indications suggest just one more question left to answer.

Whatcha gonna do, super bantamweights…when the Rigolution runs wild on you?

IBF lightweight title – Temecula, California
Richard Commey (champion/No. 5 IWBR) vs. Raymundo Beltran (Unranked IBF/Unranked IWBR)
Commey (28-2, 25 KO): First title defense; Scored stoppages in eight of last 10 victories
Beltran (36-8-1, 22 KO): Sixth title fight (1-2-1, 1 NC); Held WBO title at 135 in 2018 (zero defenses)
Fitzbitz says: Here’s a case of a fighter on the rise taking on a fighter who’s leveled off, if not begun to slide. Commey has all the tools to win this one and look particularly good doing in. Commey in 7 (90/10)

WBO middleweight title – Providence, Rhode Island
Demetrius Andrade (champion/No. 6 IWBR) vs. Maciej Sulecki (No. 2 WBO/No. 10 IWBR)
Andrade (27-0, 17 KO): Second title defense; First professional appearance in his hometown
Sulecki (28-1, 11 KO): First title fight; Suffered lone career loss in lone career 12-round fight
Fitzbitz says: Count me among those who believe Andrade might ultimately be the best of a talented crop at middleweight. He certainly warrants a look. This will be a quality audition. Andrade in 9 (95/5)

[QUOTE=Mexican_Puppet;19858962]You have reason, man, Im sorry for that. But for me, it's disrespectful Say that Márquez was juiced Márquez always trained like a beast and is a gentleman...[/QUOTE] Marquez was the man, he always came to fight and is to…

Glad to know that rigo shifted from his old self running and avoiding to trade punches with his opponent. Tbh, rigo's fighting styles really suck and that may be the reason why his billing flop more often than not. I…

[QUOTE=PRchamp;19858467]Let’s talk about Boxing and don’t be so disrespectful. You getting your rocks off by calling me this and that haha put the poms poms down son[/QUOTE] You have reason, man, Im sorry for that. But for me, it's disrespectful…

[QUOTE=tophat1;19858294]it's tragic that one of the best technical and defensive fighters ever grace the ring has had to adopt a style where he takes risks/shots to land fights.[/QUOTE] We are stupid Americans. :thumbsdow