Stevenson: Lomachenko Taught Me a Lot During Training Camp

Stevenson plans to take many mental notes while watching Vasyl Lomachenko and Guillermo Rigondeaux match skills and boxing IQs in The Theater at Madison Square Garden.

“I can’t really pick a winner, but I think it’s gonna be an amazing fight,” Stevenson told BoxingScene.com before an open workout Wednesday at Mendez Boxing Gym. “I think that’s two of the highest-level boxers and one of the highest-level, the best skill-level boxing [matches] ever.” 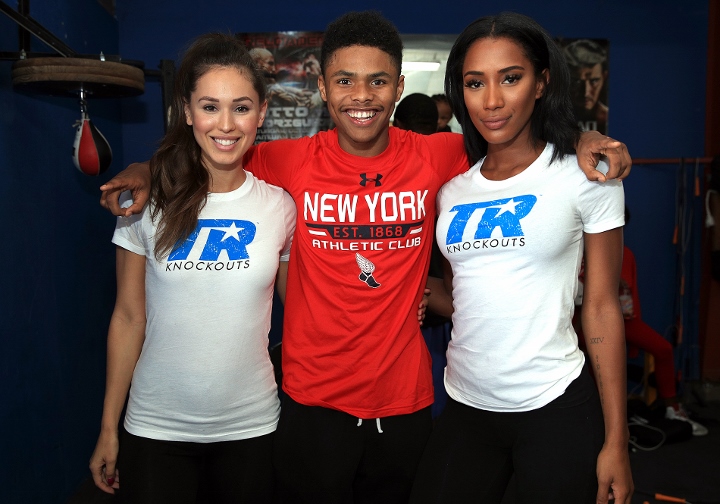 The 20-year-old Stevenson (3-0, 1 KO), a silver medalist at the 2016 Summer Olympics, already has learned plenty from Lomachenko. The left-handed southpaw from Newark, New Jersey, was one of Lomachenko’s primary sparring partners during his recently completed training camp in Oxnard, California.

The skillful Stevenson, who’ll fight on the Lomachenko-Rigondeaux undercard, tried as best he could to replicate the looks Lomachenko will encounter when he faces Rigondeaux in a 12-round fight for his WBO super featherweight title. He took much more away from the time he spent in camp with Lomachenko than just what he learned during sparring.

Lomachenko’s professionalism impacted Stevenson, who returned to the East Coast with a better understanding of what it’ll require to take those steep steps from precocious prospect to world champion.

“I learned that you’ve gotta be a hundred-percent living boxing,” Stevenson said. “Especially when you’re in training camp, you’ve gotta be focused on just boxing. You can see that the way he trains, he’s focused on what he’s gotta do. I guess focus is the main thing. As long as I’m focused and I stay hungry, I should be in the same situation later on down the line.”

The 29-year-old Lomachenko impressed Stevenson inside the ring as well.

“That was an amazing experience, me sparring with Lomachenko,” Stevenson said. “I’m blessed that I got that opportunity. I learned a lot of things. I picked up on little defensive tricks, little inside maneuvers. I learned a lot. I think that is gonna help me a lot. I feel like it showed me where my skill level is and showed me how good I was.

[QUOTE=BillyBoxing;18318593]reported for racism, hope you get banned and doesn't get a pass loosers like you always get.[/QUOTE] LOL! hypocrite $h!.Ts like you are so BS! I just responded to a racist you moron! and my attacks is not about skin…

[QUOTE=BoxHec;18317411]LOL! has been 70 years that all white boxers has blacks as idols and the same with basketball since 60 years! about culture 99% of white people all around the globe listen hip-hop, R&B, blues, jazz, soul etc, and see…

He shouldn't emulate that Ukrainian bastard. When not in training camp I hear Loma is a very heavy drinker, he's been spotted in bars in the Oxnard area blasted out of his mind!

They tryna emulate us and sheeit. We taught these foos everythang they know.

[QUOTE=turnedup;18318139]Watching Loma train is that thing of beauty, the way they force him to think while executing his fight strategy is some next level shhh. I would love to see more of that in boxing because it honestly has to…