Next January, Eye of the Tiger Management will host another world-class boxing gala with it’s share of local flavor. This event, presented by La Queen beer and Mise-O-Jeu, will feature the fight between Montrealer Steven “Bang Bang” Butler (28-2-1, 24 KOs) against Coteaulacois, Francis “The people's champ” Lafreniere (20-7-2, 11 KOs).

“We’re happy to finally be able to bring forward this fight that all fans have been waiting for, for a long time. It is important for us to keep our boxers active despite the current situation and we believe that Francis Lafreniere is the ideal boxer to deliver a real war against Steven. We know that this bout will appeal to boxing fans in Quebec and even internationally thanks to our web platform, Punching Grace", mentions the president of EOTTM, Camille Estephan 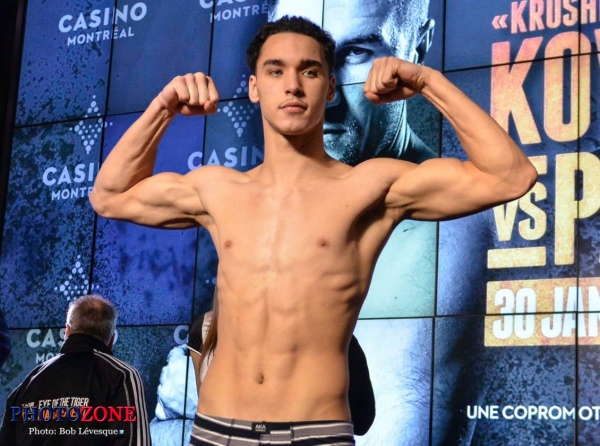 This fight long awaited by boxing fans will symbolize the great return to the ring of Steven Butler following the loss he suffered last December at the hands of Ryota Murata (16-2-0, 13 KO) in a fight for the WBA "regular" middleweight world championship.

“I'm very happy to box against a fight from Quebec for whom I have a lot of respect. It will be a tough fight against Lafreniere given his aggressive style, but I'm up for the challenge. I can't wait to get back into the ring to demonstrate the things I learned with my new coach. I want to prove that I am part of the big leagues,” says Butler.

Being known for his hard-hitting style, Butler will still have to be wary of Lafreniere's endurance and tenacity. In the past few months, adjustments have been made to this effect by his new team of the one known as ??Bang Bang??.

“Lafreniere is not a guy we take lightly. He is a boxer with a lot of courage who will give Steven quite a fight. I can't wait to see Butler apply what I taught him both defensively and with counters,” said Mike Moffa.

Being a spectacular boxer who does not skimp on work Lafreniere maintained training steadily with his trainer, Stephan Larouche, despite the confinement since he had previously received an offer to fight against unbeaten Edgar Berlanga (15-0-0. 15 KOs).

“I can't wait to fight! It’s been 13 months since I fought, but I’ve been training for a while because I had accepted Berlanga at 168 lbs for December 12th. I have never refused anyone. I will confront Butler with the intention of making a statement! I'm not going just to collect a cheque," says Lafreniere.