Stephen Fulton: I Found My Own Lane - Beating Undefeated Fighters

Boxing can be bittersweet. Just ask Stephen Fulton Jr., who has the biggest moment of his career coming up this Saturday when he faces Angelo Leo for the vacant WBO junior featherweight title.

That’s the sweet part. The bitter? The passing last Friday of a man who meant so much to Fulton and the Philadelphia boxing scene, Brother Naazim Richardson. But if Fulton knows anything, it’s that the man that worked his corner for so many years would have wanted him to keep the focus on the fight ahead, and nothing else.

“As he would say, I'm a smart, intelligent fighter first,” said Fulton. “So I'm handling it real smart at this moment and I'm just gonna use that fuel that I need to put into this fight on August 1st.”

Fulton recalls what so many in the sport said about Richardson, that talking to him was never just about boxing, even if the sweet science was the kick-off to the conversation.

“Of course,” he said. “It would start off as just boxing, and it would lead to life lessons and goals and lectures.”

Fulton, 26, took those lessons to heart. And he’s been implementing them piece by piece as he built an 18-0 (8 KOs) pro record, going from prospect to contender in the process. And most importantly, he’s never forgotten what it means to be a Philly fighter.

“Smart, rugged, dirty, grit,” he said. “We're willing to take on anybody, we have that toughness. That's the Philly fighter within me.”

That doesn’t mean Fulton has always needed to show all those attributes on fight night. Sometimes, the planets align and it’s an early night. But when Fulton has had to go the distance and / or dig deep to get the win, it hasn’t been an issue. In fact, he welcomes the fights where he will have to go to the dark places a lot of folks don’t want to go in order to emerge victorious. And even if his hand isn’t raised, he’ll know he left it all in the ring.

“A person has to bring that out of you, and if a person does survive and is trying to keep taking it to those later rounds, at that point, it's gonna be me or you, and that's the Philly end of it,” Fulton said. “One of us is gonna go down, and it's gonna be me or you, and we keep that in our mind. If I take this loss, I'm gonna lose, if I get knocked out, I'll get knocked out, and that comes with how we were raised in Philadelphia, how we grew up and had to survive in the street.” 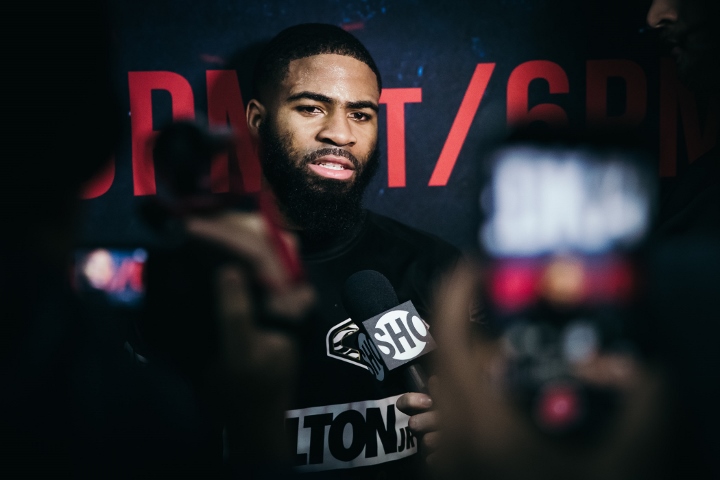 It’s how Fulton has fought his entire career. No, he’s not a chin tucked, haymaker throwing brawler, but if you want a test of his toughness, just look at a record that has seen him fight eight unbeaten opponents. Leo will be the ninth, and that’s a better stat than a cool knockout percentage. I wonder if this was Fulton’s doing or if his manager just didn’t like him too much.

“Early in my career I was tested,” he said. “And they will test you. And once you keep beating these guys, it becomes a part of you. Floyd Mayweather had the Olympic background and then he had the sh-t talking here and there. You got guys like Adrien Broner, who had the swag for the boxing and the sh-t talking as well. And then you have a guy like me who beats undefeated fighters and I found that nobody in the sport has done that like I have, and that's what it started becoming. I found my own lane and that's my lane - beating undefeated fighters. And it came to the point where it became easy to me. So I don't think that they just don't like me (Laughs), I just think it became a part of me and people are starting to catch on to that.”

Fulton has gotten so good at taking zeroes that he can sense the doubt in his opponents as soon as they feel that first loss coming on.

“Hell yeah,” he laughs. “It's not new to me. I learned that. I'm an intelligent fighter before anything else. That's how I win my fights, from pure intelligence. The skill comes second, the power comes last.”

And now he’s in perhaps the biggest fight in boxing since the COVID-19 pandemic hit a few months ago as he headlines the return of Showtime and PBC.

“I love the pressure,” he said. “I perform under pressure. That is what brings the best out of me. Pressure. I love when I'm doubted, I love when my back's against the wall. I love when all the pressure is on me and I feel like I have to hold Philadelphia on my back and lift my shoulders up. I love that. That's what makes me who I am and makes me the fighter I am.”

Needless to say, he’s not getting any butterflies in his stomach at the reality that all eyes in the boxing world are on him this week.

“It doesn't make me nervous or anything,” he said. “I'm starting to feel like this is normal, that it's a part of my life. Some fighters get these opportunities, such as Angelo Leo, and he might be nervous right now and thinking this is the biggest fight of his life, which it is and I understand that. But I feel like my last fight (against Arnold Khegai) was tougher than any other fight I ever had, so I think I'm past that stage.”

That 12-round win over Khegai in January put him in position for this fight, where he’s 12 rounds or less from becoming a world champion. That’s heady stuff for a young boxer with less than 20 fights, and while he doesn’t know how he’ll react emotionally if he wins the belt this weekend, he does know that when it comes to what happens in the fight, he’s been preparing all his life for that.

“Sometimes I think about it here and there and you can't really put a price on those emotions,” Fulton said of winning the title. “Some people get the belt and they cry and break down, and it's like 'Damn, they really felt that.' Maybe that's what I'll feel. But then what if I don't feel that right then and there and I cry when I get back to my dressing room or something? So I try not to really think on it as much and I just get the job done. I feel like this is what I'm here for. This is my life, and this is all normal to me. Once I look at things like that, I'll be great in the sport. Not just good, but great. I'll be undisputed or a multi-division world champ.”

[QUOTE=BlackR0bbb;20679255]According to low-key racists like you, every good undefeated black fighter has fought nothing but bums, right?[/QUOTE] lol He is definitely not good. He is black and “undefeated” so I guess your technically correct. Why they skip Castro? Fulton has…

Can’t wait for this fight. It’s evenly matched. I wonder how the bookies have it? Do they have Fulton Jr or Leo as the favorite by a wide margin?

Cool Boy Steph, do it for Brother Naazim, and do it for your city! Philly needs this!

[QUOTE=glenn mcrory;20679183]*****s pretty easy when your protected. About 6 of those are bums, the two that arent he has very debatable wins over. If hes really willing to fight everyone why he skip Castro?[/QUOTE] According to low-key racists like you,…

*****s pretty easy when your protected. About 6 of those are bums, the two that arent he has very debatable wins over. If hes really willing to fight everyone why he skip Castro?