Spence: Shawn Porter is a 'Dirty' Fighter - We'll Have Plan For That

Errol Spence Jr. and Shawn Porter kicked off their press tour Tuesday just outside of the Staples Center on a sweltering day, and although most of the proceedings were respectful and civil, Spence Jr. threw a verbal jab at his adversary.

“I acknowledge that [Porter] is kind of dirty. A lot of times he does like to fight dirty, especially if things don’t go his way,” said Spence Jr., the IBF welterweight titleholder. “I’m not worried about it. We’ll have a game plan for it.”

Spence Jr. said he will try to make the fight as simple as possible and not overthink about any roughhouse tactics Porter may present.

“Maybe he can bring out different tools in my arsenal,” said Spence Jr. “He’s a guy who’s rough and rugged. If I do start outpointing him, he’s going to try and make it rough and knock me out of my gameplan, trying to miss me and break me down like he does with his other opponents. I’ll be ready for anything.” 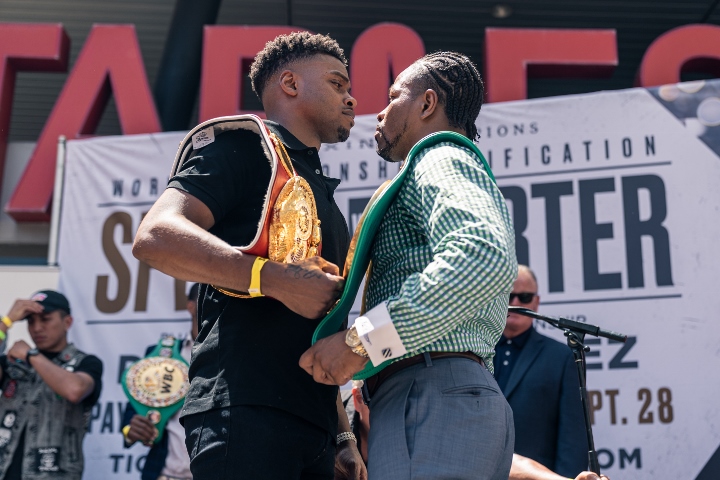 Spence Jr. said one way to combat Porter’s rough tactics is through strength since he’s the bigger fighter. He will mix a combination of both an inside and outside attack to showcase his entire skillset.

“I believe I can do the same thing too,” said Spence Jr. “He’s going to try to break me down mentally. It’s on me not to fold. It’s about switching gears throughout the fight, turning it off and on and showing my whole talent.”

Porter, the WBC champion, is notorious for giving opponents a taste of his aggressive style inside. After Porter beat Andre Berto in 2017, the Haatian said Porter purposely head-butted him numerous times before their fight was called to a ninth-round stop.

Spence Jr. said if it calls for it, he too will throw elbows and head-butts during his Sept. 28 showdown with Porter in Los Angeles.

Both fighters will be better served by not bringing their heads together.

The only unification fans want to see is that off titles, not craniums.

[QUOTE=revelated;20088680]Ay where you at, bro? I thought Porter was getting stopped. What happened?[/QUOTE] I must give respect to Porter. He showed me a lot tonight. I still had Spence winning by 2 rounds without the knockdown but you was right…

[QUOTE=Tha Kid;20002569]Who the hell is Spencer? If you are talking about Spence then you must be slow lol. Porter is getting stopped or quitting by 8. :boxing:[/QUOTE] Ay where you at, bro? I thought Porter was getting stopped. What happened?

[QUOTE=Tha Kid;20002556]Oh we will definitely revisit this after the fight. Don't run and hide "keep that same energy" after the fight. That's a Spence quote :boxing:[/QUOTE] You just remember - I was the ONE guy around here who told everyone…

[QUOTE=mathed;19990776]He'll have Spencer's dome leaking by rd 2, lol.[/QUOTE] Who the hell is Spencer? If you are talking about Spence then you must be slow lol. Porter is getting stopped or quitting by 8. :boxing: