Can Spence Overpower Peterson, Demolish Him Way Matthysse Did?

NEW YORK – The lopsided odds on their fight might lead you to believe Errol Spence Jr. will demolish Lamont Peterson the way Lucas Matthysse annihilated him.

Matthysse dropped Peterson three times with left hooks, once in the second round and twice in the third. The Argentinean knockout artist needed less than nine minutes to end what was billed as a highly competitive fight in May 2013 at Boardwalk Hall in Atlantic City.

Nearly five years later, that three-knockdown destruction stands as the only knockout defeat on Peterson’s otherwise respectable record. It’s an anomaly, something that hasn’t even come close to happening to the two-division champion in any of his other 38 professional fights.

Timothy Bradley dropped Peterson, too, and beat him soundly in their 12-round, 140-pound title fight in December 2009. That still doesn’t remotely compare to how Matthysse manhandled him.

“Lucas Matthysse, he’s a power puncher,” Spence told BoxingScene.com before a press conference Thursday in Manhattan. “He’s a guy who hits very hard. Especially at that time, he was on a roll. He was a monster, so I mean, he just got caught with a good shot and he couldn’t recover. And Lucas jumped all over him.”

Not even Spence expects to pummel Peterson the way Matthysse did during their fight for the WBC’s interim super lightweight title.

“If it happens, then it happens,” Spence said. “I could do it if I catch him with a great shot, like Lucas Matthysse caught him with. But we’re not planning for that. We’re focused on a 12-round fight, just in case it does go 12 rounds and it’s a grueling fight. So we trained for a hard 12 rounds – nothing more, nothing less.”

Don’t take that to mean that Spence doesn’t intend to justify the hype he has generated during his ascent toward stardom when he faces Peterson on Saturday night at Brooklyn’s Barclays Center (Showtime; 9 p.m. ET/6 p.m. PT). The strong southpaw wants to begin 2018 by re-establishing the momentum he began building May 27, when he traveled to Kell Brook’s hometown of Sheffield, England, and knocked out Brook in the 11th round to win the IBF welterweight title. 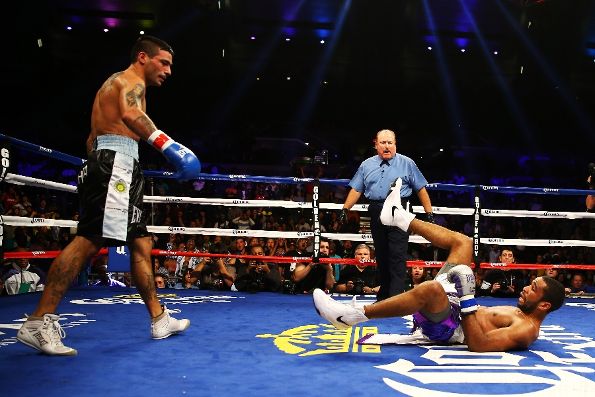 That superb performance stamped Spence as a potential superstar, an uncommon combination of power, speed, fearlessness and athleticism that’ll be very difficult for even elite welterweights to beat. The 28-year-old Spence seems to realize that his encore cannot amount to a closely contested title defense against Peterson.

Though experienced, intelligent, skilled and tough, Peterson will turn 34 next week and has been blown out on a big stage. A heavy favorite seeking supreme pound-for-pound recognition needs to act accordingly.

“I wanna just dominate,” said Spence, who’s 22-0, including 19 knockouts. “I want a great, one-sided performance. Lamont is a great fighter, has a great name and everything like that. But I wanna have a dominant performance Saturday night.

The DeSoto, Texas, native knows better, though, than to anticipate his first title defense resembling his last appearance at Barclays Center. The 2012 Olympian obliterated former WBO super lightweight champ Chris Algieri on his way to a fifth-round stoppage in that April 2016 bout.

“People take Lamont for granted,” Spence said. “He’s an underrated fighter. Lamont is a guy who can fight. Nobody really has blown him out of the water except Lucas Matthysse. And I feel like Matthysse just caught him with a good shot. Lamont is very skillful. He’s a guy who can fight, has a lot of ability, always comes in shape and he’s durable. So I see it as being a great fight. I’m not overlooking it at all. It’s gonna be a great fight.”

Peterson (35-3-1, 17 KOs), of Washington, D.C., is almost six years older than Spence and hasn’t been particularly active. This will mark Peterson’s first appearance in 11 months and just his second fight since scoring a majority-decision victory over Felix Diaz in October 2015.

The determined, professional Peterson will be highly motivated to upset Spence because he knows he is running out of time to secure sizeable paydays.

“He’s probably looking at it like this is one of his last opportunities,” Spence said. “This is a world title fight and he’s coming to win. He’s always training hard and he always comes in tip-top shape for fights, so I know he’s not taking this moment for granted at all.”

Handicappers have still installed Peterson as a 10-1 underdog.

As anxious as Peterson is to test his unbeaten opponent, he suspects Spence might be better than anyone he has fought. Peterson has lost only to Matthysse, Bradley and Danny Garcia, whose majority-decision win is debatable, and owns wins over former champions Amir Khan, Kendall Holt and David Avanesyan.

Peterson technically won a world title in a second division when he out-boxed Russia’s Avanesyan (23-2-1, 11 KOs) to capture the WBA world welterweight title in his last fight, February 18 in Cincinnati. Keith Thurman (28-0, 22 KOs, 1 NC), the man Spence hopes to fight, is the WBA’s true welterweight champion.

Nevertheless, Spence respects Peterson and the feeling is completely mutual.

“He has come along very well,” Peterson said. “I kind of knew from knowing him when he was an amateur that he would be in this position someday. … On paper, he can be a step [above] the guys that I’ve fought. But that’s a question you’ll have to ask me after Saturday night for me to fully give you details on that.”

exactly what he did man..spence overwhelmed peterson

Everybody go pull out your life savings and put it on a Spence KO. Easy money.

An irrelevant and moot point ...anything to stir up the coals.. the article has no Credence ..different Fighters with different styles but Spence will possibly stop Peterson in the middle rounds 8 or 9..NO ONE beats Spence in the foreseeable…

Peterson is a bum mattysse took his soul already

[QUOTE=goldenbear;18419376]I'll just say this every fight were "The Machine" was blood tested for the fight Garcia/Postol he hasn't looked all that. Don't recall whether he was or not for Peterson fight. Peterson was caught early with a good punch however…