Spence: I Didn't Get Off What I Wanted, Porter Made it Tough

"It feels good to win," said Spence. "This is a lifetime dream. It shows hard work pays off. Thanks Shawn Porter, my whole team and all my Texas people for coming out."

The back and forth brawl immediately garnered well-deserved Fight of the Year conversation as the two welterweight champions traded power punches from the opening bell to the end. Porter showed his trademark aggressive style throughout the action, smothering Spence while throwing his own power punches.

"Shawn Porter is a rough and awkward fighter," said Spence. "I didn't get off what I wanted to. He's a true champion. He made it tough." 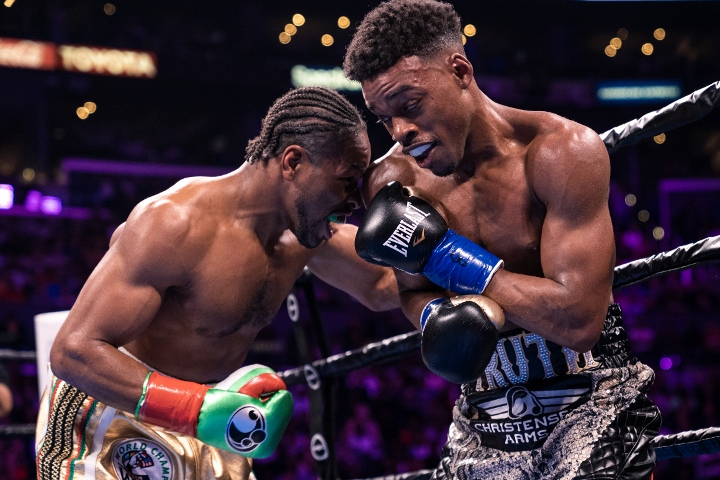 That left it up to Spence to weather the oncoming storm and find spots to land power punches of his own. According to CompuBox, Spence landed 44% of his power punches, to 25% from Porter.

In round four, Porter had Spence in some trouble, as his power shots to the head and body put Spence on the defensive. The strategy from Porter stayed the same throughout, as Spence began to adjust and find a home for his offense, especially the sweeping left hook.

Round eight saw the action taken up to yet another level as Spence initially got the worst of one of the numerous exchanges, before settling in and responding enough to keep Porter at bay. The high-octane fight continued to entertain heading into the championship rounds with the fight up in the balance.

Spence landed one of the decisive blows of the bout in round 11, connecting flush with that sweeping left hook and scoring a knockdown when Porter's knee and glove hit the canvas. As expected, Porter rebounded strong, going at Spence and putting him on the back foot for most of the remainder of the round.

The final round was more of the same, with both fighters going toe-to-toe and leaving the STAPLES Center crowd on their feet and roaring until the final bell. The final punch stats saw both men throw nearly an equal number of punches, with Spence edging Porter 745 to 744 in punches thrown and 221 to 172 in punches landed.

"All my punches have bad intentions," said Spence. "By boxing Mikey Garcia, I wanted to show people I could do it with that style. Porter was throwing a lot. I wanted to show I was the bigger and stronger welterweight."

After 12 rounds the close nature of the fight yielded a split decision from the judges. One judge saw the fight 115-112 for Porter, overruled by two judges who saw it 116-111 for Spence. In the ring after the fight, Spence was confronted and called out by former two-division champion Danny Garcia for a potential showdown next.

All these spence hater in here...porter wild ass got whooped...and as far ass crawford, fighting these tomato can fighters.. who he fighting next 🤔....a nobody

One of the better fights I've seen so far this year. I knew Porter would be competitive but was surprised at how close he kept it, there was no way that should a have been a split decision though.

[QUOTE=Jim Tom;20089824]Crawford whips Spence any day of the week and twice on Sunday. .[/QUOTE] This. And whoever had Porter as a 10-1 underdog was crazy. 3-1 or 4-1 would have been acceptable. Shawn Porter is a very capable fighter, and…

The fight proved Spence is just a B+ fighter and it is safe fight the 40year old HOF.