Spence: I Felt Porter's Power; Tougher Than I Thought

But some of those flush punches Shawn Porter landed during their 12-round, 147-pound title fight let Spence know he was in the ring with a powerful opponent. Porter snapped back Spence’s head several times with right hands and attacked Spence’s body throughout a highly competitive clash Spence won by split decision at Staples Center.

“[I was] not necessarily hurt,” Spence said during the post-fight press conference, “but I did feel his power.” 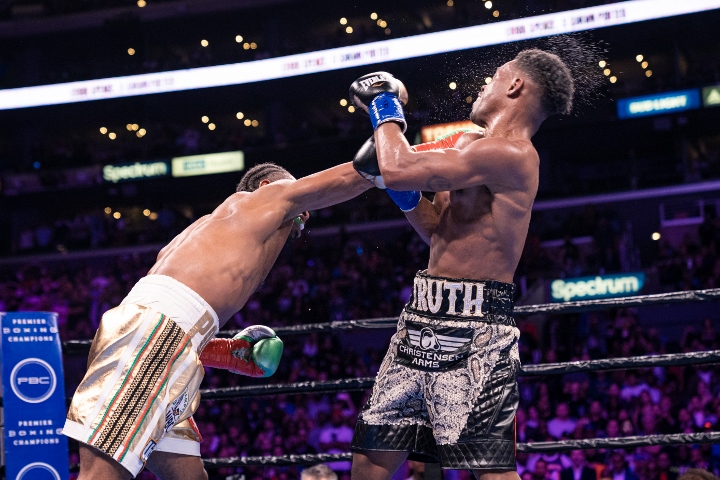 Porter definitely felt Spence’s power, particularly in the 11th round. Spence’s perfect left hand cracked Porter directly on his jaw, which caused Porter’s legs to buckle and made him touch the canvas with his left glove.

The rugged Porter quickly recovered from that knockdown and continued giving Spence the most difficult fight of his six-year pro career.

“You know, he throw punches from different angles,” Spence said. “He real awkward. And I already knew he was gonna be tough, but you know, he was a lot tougher than I thought.”

Spence still fended off the former WBC welterweight champion and won on two of the judges’ scorecards.

The 29-year-old Spence (26-0, 21 KOs), of DeSoto, Texas, defended his IBF welterweight title for the fourth time and won the WBC championship from the 31-year-old Porter (30-3-1, 17 KOs), of Akron, Ohio. Spence mentioned the possibility of a rematch and acknowledged that Porter provided the toughest test of his career.

“I always respect him as a fighter, him and his dad,” Spence said, referring to Ken Porter, Shawn’s father/trainer. “You know, I always respect what they did. I’ve been knowing them since the amateurs. And, you know, they always been top amateurs. He’s always been winning, always beating big guys in the amateurs and things like that. So, you know, it’s always a respect thing. But, you know, when it’s fight time and you’ve got somebody trying to take your belt, something you fought for for a long time, and trying to take food out your kids’ mouth, you know, it’s a lot of, you know, animosity get built up and a lot of frustration and things like that, because we’re doing tours and I’m looking at this dude and thinking about this dude for 10 weeks straight. So, it’s a lot of stuff get built up. So, I mean, it’s all over now. You know, I’ve been knowing him for a long time. You know, I’ve got a lot of love for Kenny and Shawn, and it’s all respect.”

The Spence Hate is out of hand here. Yeah, he has a lot of hype so I get some of the pusback, but that was a really hard fight. Porter looked as good as he can possibly look. He did…

[QUOTE=Jrtxboiy;20093500]Exactly these mfs don't know boxing[/QUOTE] I think ALL todays welterweights are over rated. Cant compare them to Forrest, Delahoya, Pac, Trinidad & Moseley.

[QUOTE=BIGPOPPAPUMP;20091794]LOS ANGELES Errol Spence Jr. never was what he considered hurt Saturday night. But some of those flush punches Shawn Porter landed during their 12-round, 147-pound title fight let Spence know he was in the ring with a powerful opponent.…

[QUOTE=mxtali;20093435]Thurman was a full blown weltweught and danny ate his shots all night. That’s a decision fight 100%. Danny gonna be another stiff test just like Porter was.[/QUOTE] The difference is Thurman and Danny are scared to be hit. There…