Spence: Arum's Desperate; He's Mad Because I Hold All the Cards

Spence doesn’t get the same feeling from Crawford’s promoter. If Bob Arum actually wanted to put Crawford in the ring with him, Spence figures Arum wouldv’e taken a different tact than he took last weekend.

The 87-year-old promoter repeatedly referred to Spence’s adviser, Al Haymon, as “a scamster” in the immediate aftermath of Crawford’s sixth-round, technical-knockout of Amir Khan at Madison Square Garden in New York. Arum also suggested Haymon, who’s black, would use race to keep Spence, who’s black as well, from working with him to make one of the most anticipated fights in boxing (https://www.boxingscene.com/arum-haymon-tell-spence-listen-white-guys--138214). 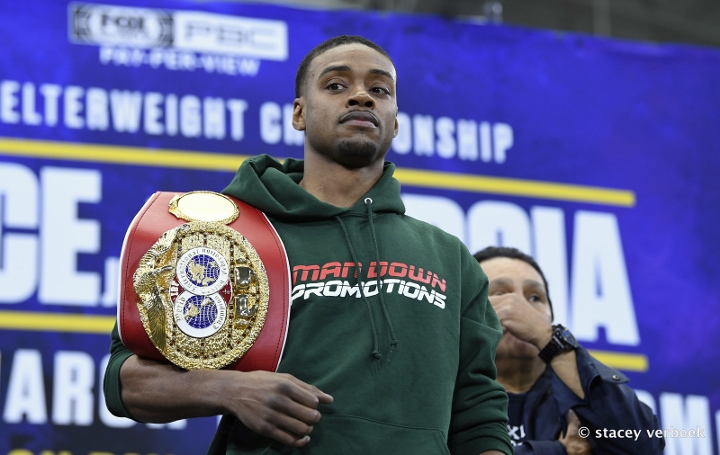 “I don’t think he wants to make the fight,” Spence said. “When you go out and you bash somebody, and then you say you’re gonna call him on Monday, but you’re bashing him on TV, how will somebody wanna talk to you? At the end of the day, they’re businessmen. But you’re human, too. If somebody just bashes you over and over and over and over, and then wanna come down and sit at the table and basically make a fight happen, how is that? I don’t see how you can make that happen.”

Spence sensed desperation from Arum once Spence realized how angry Arum appeared after Crawford defeated Khan, who quit, according to Spence (https://www.boxingscene.com/spence-khan-quit-ve-gone-out-on-shield-ppv-money--138395).

Whereas Spence has appealing options before seriously pursuing a higher-profile fight with Crawford (36-0, 25 KOs), the WBO welterweight champ, Spence is convinced Arum and his Top Rank matchmakers are bothered by not having comparable attractive alternatives to their pay-per-view showdown. Regardless, the 29-year-old Spence says they’ll just have to wait until he is good and ready to face the 31-year-old Crawford.

“I feel like they’re real desperate, as you could tell,” Spence said. “Bob’s never really that vocal, like he was. He was mad and very vocal because I basically hold all the cards. I could fight Shawn in a unification fight. I’ve got [Manny] Pacquiao, I’ve got Keith Thurman. I wanna unify with Shawn Porter and then, hopefully if Keith and Pac-Man fight each other, that’s another super fight I could have right after the Shawn Porter fight. So, I feel like I hold all the cards. Then, once I get the three belts, then we’ll think about Terence Crawford and it definitely won’t be a 50-50 split, right down the middle.”

Spence expects to face Porter (30-2-1, 17 KOs), the WBC welterweight champ, in a 147-pound title unification fight either late in the summer or early in the fall.

SELECTIVE outrage is a serious problem on this SITE

With or without Arum the question is do you want to fight Crawford or not? Cut this stupid holding all the cards crap. It's entirely irrelevant. You don't have to fight him now if you're not ready. You could at…

[QUOTE=Code Red;19707300]Then you should be willing to wait for it then[/QUOTE] Race baiters like you are a$$holes