Sonny Conto To Fight in A.C., Then Help Fury Prepare For Wilder

The first time Sonny Conto saw Tyson Fury up close he was around 11 years old.

Fury was beating up a local boxer at the 2300 Theater in Philly as part of a “Philadelphia vs. Ireland” amateur showcase, Conto says, and he couldn’t get enough.

Conto had just taken up the sport and was hooked.

“It just motivated me to box,” Conto told BoxingScene on Wednesday. “Watching him at that age was a big deal. The way he moved, the way he thinks in there, his feints, hand speed, it was just motivation. It’s just crazy how time flies and where we are now.”

More than a decade later, Conto (5-0, 4 knockouts) is following in Fury’s footsteps as an undefeated heavyweight.

But more than that, he’s reconnected with Fury as a sparring partner. Conto was in camp with Fury to help him prepare for his bout with Tom Schwarz on June 15 in Las Vegas.

“Fury said he’s the only guy he didn’t knock down in that camp so he likes Sonny,” Conto’s manager, David McWater of Split-T Management told BoxingScene. “It’s a great relationship.” 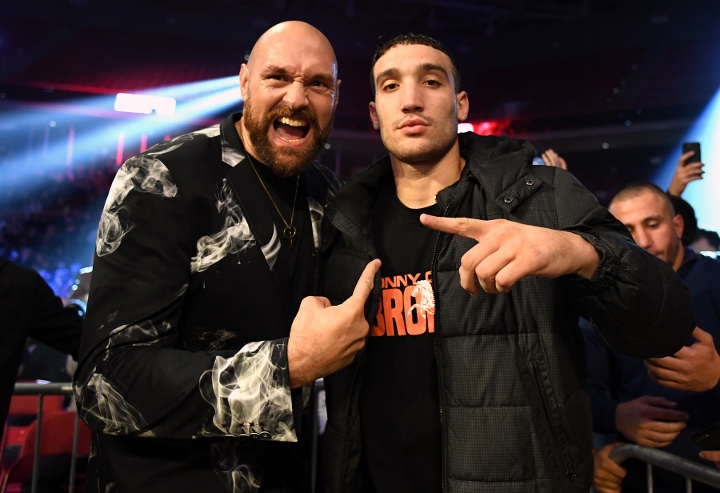 On that same June card, Conto dispatched Daniel Infante in less than a round.

The two hit it off and Fury walked Conto into the ring for his last fight, another first-round knockout of Steven Lyons in October in Philly.

Now, Conto says he will be in Fury’s camp again in Las Vegas when Fury prepares for his rematch against Deontay Wilder on Feb. 22. Well, that’s if Conto comes through Saturday’s bout with Curtis Head unscathed on the undercard of the light heavyweight showdown between Jesse Hart-Joe Smith Jr. at the Hard Rock Hotel in Atlantic City (ESPN).

When Conto brought up the childhood memory to Fury recently, Conto says Fury was amazed the two went back that far.

“He couldn’t believe it,” Conto laughed. “It’s honestly a dream come true to help him get ready for this fight,” he went on. “I get the experience and it’s just awesome to be around him and his group. I thought Fury beat him the first time so of course I think he wins again.”

These are good times for the amiable Conto, a fluid, twitchy athlete, whose journey to this point has been filled with so many highs, it’s enough to ask him to pinch himself to make sure it’s real. (He wasn’t really asked to pinch  himself.)

Because really, isn't this all a little too good to be true?

Conto is a 6-4 heavyweight from South Philly who does his road work on the same streets as the title character in Rocky.

He threw out the first pitch of a Phillies-Dodgers game in July, and he is signed with Top Rank, which has allowed him to spar with Fury, lending a degree of legitimacy to the 23-year-old newcomer.

Even the childhood connection with Fury is surreal.

All that’s missing is for the director to say cut and for the characters to walk off the set since all of this seems like it was conjured up by a screenwriter.

“So far so good,” Conto said. “I still have a lot to learn and I’m still young. I’m just taking it fight-by-fight.”

While Conto has gone just nine rounds in his young career, he has already received heaps of attention — Italian-American heavyweights don't usually get the silent treatment from media types.

“I like what I see so far,” said Philly’s Stephen “Breadman” Edwards, trainer of junior middleweight champion Julian Williams, who is back in action next Saturday. “He has a nice build, not too big and he’s got good coordination, good punch release. He doesn’t load up to hurt guys, has good hand speed and a good jab. If he keeps progressing he’ll be a player in the division.”

Conto was a baseball player before turning pro, leading Rowan College at Gloucester County to the NJCAA Division III Baseball World Series as a pitcher. McWater says his hands are so big and strong he once tore through a pair of boxing gloves by just slipping them on.

When it comes to weight, however, Conto is light for a modern-day heavyweight at around 220 pounds. McWater expects Conto to shoot up to around 245 as he progresses and fills out.

But don’t expect Conto to fight for a world title before his 15thfight, as another of McWater’s clients, lightweight titleholder Teofimo Lopez did last month in a second-round stoppage of Richard Commey.

At just 23 (toddler age for a heavyweight), McWater and Top Rank have the luxury of bringing Conto along gradually, and he expects Conto to fight six times in 2020 against moderate competition — if the worldwide leader allows it. Conto's back-story is so compelling and he’s looked so good, ESPN may want to fast-track and showcase him on its airwaves, which could lead to stiffer opposition and potentially moving up his timetable for bigger fights.

“The biggest pressure will be at ESPN,” says McWater, “because he’s so marketable, so they may want to match him a certain way but there’s so much to learn. He’s just 23 so we don’t need to rush him.”

Shoulder roll isn't a race baiter but I am not a fan of his nationalism as an american who is a fan of many non US fighters like Fury, Maidana, Inoue, Kovalev, GGG, etc. I'll never root for someone because…

No one can prepare him for Wilder. If he wants to be prepared, he should take some sleeping medicine and practice laying on his neck. Because that's exactly whats happening when he faces Wilder in February!

[QUOTE=mlac;20317699]He may be a mentally impaired half wit but at least hes entertaining with his lunacy. All you do is race bait and post nationalistic crap about Uk V Us type drivel.[/QUOTE] I am not on here all the time…

[QUOTE=mlac;20317715]Yes, his videos of him hitting the heavybag with a tub of grease on his head and jerking off a speedbag & all his posts along the years have had given me many laughs over the years. As for proving…

[QUOTE=ShoulderRoll;20317707]You're entertained by ret[I]a[/I]rds? Different strokes for different folks I guess. Show me where I race bait. Prove it or keep your accusations to yourself. As for being nationalistic...I make no apologies for that. US boxing history and tradition is…