Erik Skoglund continued his unbeaten streak with a heroic performance against Ryno Liebenberg to claim the IBO International Light Heavyweight title last night at the Hovet in Stockholm.

Liebenberg had said he would drag Skoglund into a ‘dog fight’ and that is exactly what happened after Skoglund received a nasty gash above his right eye following a clash of heads in the sixth-round.

With blood pouring from the cut, the Swedish fighter bravely fought on to score a unanimous points victory over the dangerous South African. 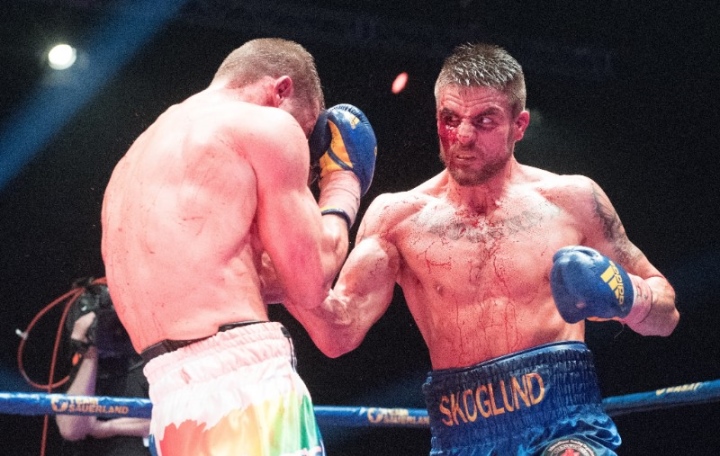 ‘’That was one of the toughest fights of my career,’’ said Skoglund. ‘’I was worried the fight would be stopped. There was a lot of blood. I’m happy that I was able to continue and claim my twenty-fifth victory. Now, we’re looking at the European title shot. It would be amazing to fight for the title at home in Sweden.’’

‘’What a performance from Erik,’’ said promoter Nisse Sauerland. ‘’The fight changed after the cut in the sixth-round, but Erik showed real class with the way he handled it. Credit to Ryno, he came to fight, but Erik proved tonight why he is one of the most exciting fighters in the division.’’

From the opening bell, Lauren, who had demanded number boys for her title defence, unleashed a relentless attack on Habazin. The Croatian looked in trouble from the first-round and was saved from further punishment by the referee in round three.

‘’It felt amazing to defend my title in front of my home fans at the Hovet,’’ said Lauren. ‘’I said I wanted to make a statement by stopping her, and I did!’’

Habazin was accompanied into the ring by Lauren’s domestic rival Klara Svensson, who had scored a unanimous points victory over Lucia Morelli earlier in the night.

Svensson had criticised Lauren for pouring water on Habazin’s head at the weigh-in and chose to make a public stand against Lauren.

‘’I don’t agree with what Mikaela did,’’ said Svensson. ‘’It was embarrassing. How long are people going to let her get away with things like that? I would love to fight her!’’

Svensson's appearance did not go unnoticed by Lauren, who called her out after the fight.

‘’Klara is next,’’ she said. ‘’I don’t like her. She is going down like Habazin, and after I’m finished with her, I want Cecilia Brækhus!’’