The Silence on Marcus Browne

Marcus Browne is a talented fighter who, at age 28, has built a 23-0 (16 KOs) record in the professional ranks. On January 19, he outpointed Badou Jack to win the "interim" World Boxing Association and "silver" World Boxing Council 175-pound titles. He's now scheduled to fight Jean Pascal at Barclays Center on August 3 in a bout that will be televised on Fox. But there's a dark underside to the story.

On December 28, 2017, an order of protection was issued against Browne at the request of his former girlfriend (and the mother of his child) after she alleged that he'd assaulted her twelve days earlier. On March 30, 2018, Browne allegedly violated the order of protection. Thereafter, he was charged with criminal contempt, criminal mischief, and harassment. The two cases were consolidated and Browne pled guilty to disorderly conduct, after which he was ordered to enroll in and complete a course on domestic violence.

Browne was arrested yet again following another incident involving the same woman (who told police that, on September 27, 2018, he tried to choke her). This time he was charged with criminal contempt, criminal obstruction of breathing and circulation, criminal mischief, and harassment On January 30, 2019, Browne plead guilty to criminal contempt in the second degree with regard to this third set of criminal charges. He was sentenced to 26 sessions in a batterer intervention program and a conditional discharge with a more stringent order of protection being issued against him.

Most recently, Browne was arrested on June 12 of this year. According to the criminal complaint, the latest incident took place on May 22 when Browne barged into the woman’s apartment after a visitation session with their daughter and wouldn’t leave. The woman called 911, and Browne was charged with felony counts of aggravated family offense and criminal contempt in addition to misdemeanor counts of criminal trespass and criminal contempt. He was arraigned in Criminal Court on June 12 and released on $5,000 bond. His next court date is set for August 12.

I don't know what extenuating circumstances might exist with regard to Browne's conduct. Often, there are two sides to a story. I do know that, from the criminal docket, it appears as though Browne's conduct would have been unacceptable at any time and is particularly noteworthy in today's #MeToo era.

The sports establishment in America, like much of the country, has been slow to react to violence against women. But over time, the National Football League, National Basketball Association, Major League Baseball, and other entities have evolved and now impose significant suspensions for misconduct by athletes who are role models for impressionable children and young adults.

How have the powers that be in boxing reacted to the case of Marcus Browne?

In large measure by pretending that the issue doesn't exist. 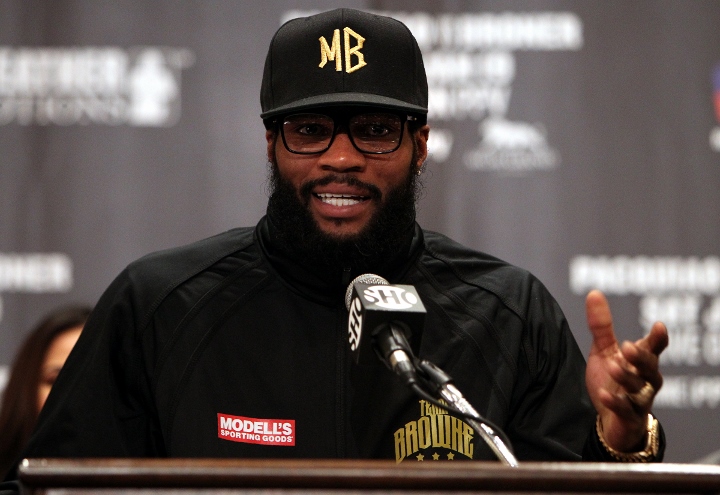 Browne, as noted above, holds WBC and WBA titles. The WBC purports to have high moral standards for its fighters. It once suspended Chris Arreola from its rankings and precluded him from fighting for a WBC title for six months because he said 'f***' in an on-air interview after losing to Vitali Klitschko.

Jill Diamond is international secretary of the World Boxing Council. By virtue of this position, she's one of the most prominent women in boxing. When asked about Browne, Diamond (whose email address is at "neverhitalady") answered, "I'll pass on this one." Pressed for more, she added, "As a woman, as a human being, I deplore all forms of violence, domestic and otherwise. I send support and compassion for all parties involved and hope for a quick and healthy resolution."

WBC president Mauricio Sulaiman also declined comment other than to say that the situation involving Browne was "a delicate matter" and "we have begun the WBC due process with regards to this matter and I will be happy to contact you once we have a clear definition of our findings and course of action."

WBA president Gilberto Mendoza Jr did not respond to inquiries regarding Browne.

Neither did Barclays Center. Questions about the matter addressed to Brett Yormark (CEO of BSE Global, which oversees Barclays Center) were responded to by director of communications Stuart Bryan who wrote, "We will not be commenting."

Lest one forget; Barclays Center hosted a stop on the misogynistic Floyd Mayweather vs. Conor McGregor promotional tour. Speaking at Barclays Center, McGregor thrust his pelvis back and forth with a microphone strategically placed between his legs to simulate sexual intercourse and proclaimed, "Here’s a little present for my beautiful black female fans.”

That brings us to the New York State Athletic Commission.

The world sanctioning organizations and Barclays Center have a vested economic interest in Marcus Browne fighting. As a government agency, the New York State Athletic Commission is charged, not with making a profit but with doing what's right.

Good character was once a requirement for a boxer to be licensed in New York. That requirement was removed when the NYSAC regulations were revised in 2016. But the commission has long taken the position that a license to box in New York is a privilege, not a right.

Should Marcus Browne be licensed to box in New York? At what point does the NYSAC say, "Enough is enough!"?

In theory, NYSAC policies are set by the commissioners and implemented by the executive director. But that's a fiction. By way of example, public records indicate that the current commissioners have never discussed illegal performance enhancing drug use by fighters in depth. Nor have they discussed  - and might not even be aware of - ongoing issues involving financial misconduct and the commission.

This writer posed the following questions in writing to Ms. Sumbler, Dr. James Vosswinkel (the commissioner most involved in overseeing the NYSAC), and Lee Park (the Department of State spokesperson who handles media inquiries regarding the NYSAC):

(1) Are incidents of domestic violence and other criminal conduct factors in determining whether a fighter is granted a license to box in New York? And if so, what specifically is the standard applied by the NYSAC?

(2) Are you aware of Marcus Browne's history of domestic violence, including his most recent arrest? If so, what are you aware of and when did you become aware of it?

(3) What steps, if any, does the NYSAC plan to take with regard to Mr. Browne's conduct?

To date, Sumbler, Vosswinkel, and Park have refused to answer - or even acknowledge receipt of - these questions. As a government agency, the NYSAC should adhere to a higher standard than this in responding to media inquiries.

The New York State Athletic Commission needs clear standards and needs to make a serious inquiry regarding the issues surrounding Marcus Browne. Instead it's running from its responsibilities.

Here, one might contrast the conduct of the NYSAC with that of the California State Athletic Commission.

On March 23, 2019, heavyweight contender Kubrat Pulev survived a gash above his left eye and rallied to knock out Dinu Bogdan in the seventh round of a fight in Costa Mesa. After the bout, while being interviewed by a website reporter named Jenny Ravalo, Pulev kissed her. A video of the kiss can be seen at [https://www.youtube.com/watch?v=jirPF0YLW_k].

Thereafter, Pulev apologized to Ravalo. Despite the apology, the California State Athletic Commission suspended Pulev for six months and ordered him to pay a $2,500 fine (the maximum that could be imposed by the commission). It also ordered Pulev to attend a state-approved course on sexual harassment.

The CSAC may well have overreacted in its suspension of Pulev. The kiss was inappropriate. But Ravelo and Pulev had met previously. Ravelo reached out and touched Pulev on camera several times before the interview [https://www.youtube.com/watch?v=DUajE03xqGI ]. She also appears to have engaged in a lap dance with members of Pulev's team that same night after the interview and kiss [https://www.youtube.com/watch?v=Cjv9IcYMeeo].

New York governor Andrew Cuomo purports to support the creation of an environment in which women are protected against physical violence. Talk is cheap.

Various arguments are being made in support of allowing Marcus Browne to fight in New York. Mike Tyson was allowed to fight after being imprisoned for rape. But Tyson had served his time and wasn't accused of violence against women thereafter. Floyd Mayweather was granted a license to fight in Nevada after multiple convictions for physically abusing women and while his jail sentence was pending. But that was before the #metoo movement raised awareness of the issues surrounding violence against women. There are also those who believe that any punishment for criminal acts should be left to the criminal justice system.

I'm not judging Marcus Browne. But don't sweep the issue under the rug and pretend that it doesn't exist. Let's have an honest inquiry and discussion about what happened.

Thomas Hauser's email address is thomashauserwriter@gmail.com. His next book – A Dangerous Journey: Another Year Inside Boxing  – will be published this autumn by the University of Arkansas Press. In 2004, the Boxing Writers Association of America honored Hauser with the Nat Fleischer Award for career excellence in boxing journalism.

[QUOTE=Phenom;19888660]Look at how many people are charged with disorderly conduct what evidence is required to charge someone with that? Like I said if you don't know what you are talking about then just don't comment about it[/QUOTE] More than 1…

[QUOTE=Robbie Barrett;19888650]You think people are charged with just a complaint and no other evidence? This is pathetic. The guy plead guilty, you know nothing about the case other than that. But yet you think you can defend him and blame…

[QUOTE=Phenom;19888645]Not really just a complaint can do If they are guilty why would serious felony chargers get downgraded to misdemeanor and all you have to do is some community service or take some classes Because they know the amount of…

[QUOTE=Robbie Barrett;19888640]I think the vast majority are yes. You see to charge them they have to have this little thing called EVIDENCE.[/QUOTE] Not really just a complaint can do If they are guilty why would serious felony chargers get downgraded…

[QUOTE=Phenom;19888638]95% of court cases results in guilty pleas because trails take years prosecutors charge stack they do everything in their power to make you cop a plea like take away your passports and cut your visitation rights in Browne case…