Showtime's Espinoza: No Sport Lies To Its Fans Like Boxing

LAS VEGAS – Like lots of people involved in boxing, Stephen Espinoza believes Gervonta Davis is one of the sport’s biggest punchers.

What the Showtime executive can’t believe sometimes is the shameless manner in which certain networks and promoters push self-serving narratives, while utterly ignoring the truth. Espinoza pointed to a competing network omitting Davis from its list of the sport’s top punchers as a prime example of attempting to mislead viewers with what he considers agenda-driven information.

Espinoza, Showtime’s president of sports and event programming, discussed dishonesty in boxing during a wide-ranging interview with reporters recently at an event to promote Davis’ next fight. Showtime will televise the bout between Baltimore’s Davis (22-0, 21 KOs) and Cuba’s Yuriorkis Gamboa (30-2, 18 KOs) on December 28 from State Farm Arena in Atlanta. 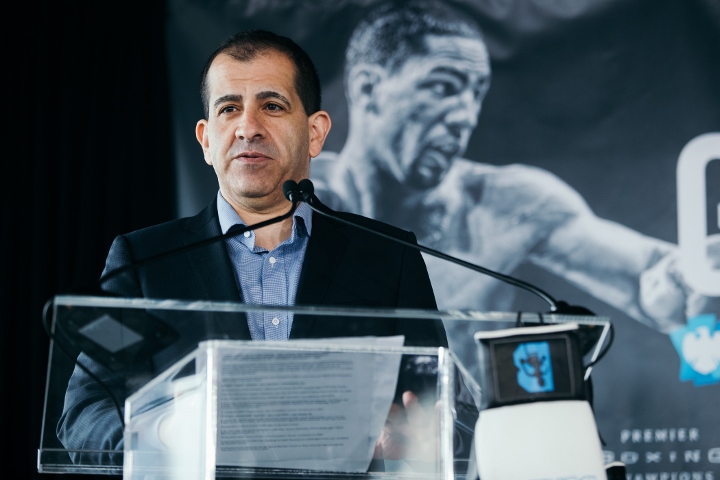 Espinoza is confident Showtime’s team of announcers – Al Bernstein, Jim Gray, Paulie Malignaggi and Mauro Ranallo – won’t oversell Davis-Gamboa as something more than it is. Though talented and accomplished, Gamboa will turn 38 five days before he encounters the 25-year-old Davis in a 12-round lightweight fight.

“I don’t wanna get back on my soapbox again,” Espinoza explained, “but the presentation of the sport – I mean, one of the things we talk about is, is it possible to be objective and unbiased? I think that’s something that our announcers take pride in. And I think that’s, you know, I’ve said that there is no sport that exists that lies as regularly to its fans as boxing. The announcers lie. You know, the promoters lie. And it’s not healthy. College football doesn’t sell every, single game as Alabama-LSU. Not every NFL game is the Super Bowl. Sometimes it’s just a game. And I think we do a disservice when we try to sell something as one thing, when it’s not.

“You know, and we do an even bigger disservice to the sport when you’re giving context – these are the people who are important, these are the people who matter – and you’re leaving [Davis] out because of agendas and biases. You know, look, I’m not gonna say we haven’t made mistakes or shown our own preferences at times. But the goal here is building the sport and doing it in a way that rewards the fans. And the one thing we have to do with fans is be honest.”

Davis, a two-time 130-pound champion, will make his third appearance on Showtime this year when he boxes Gamboa. That telecast also will feature Jean Pascal (34-6-1, 20 KOs, 1 NC) and Badou Jack (22-2-3, 13 KOs) in a 12-round fight for Pascal’s WBA interim light heavyweight title.

[QUOTE=BennyBlanco;20189436]What's an intentional mismatch? Are there accidental mismatches? And how did Showtime prevent AJ vs. Wilder from happening when Wilder wasn't signed to Showtime?[/QUOTE] Intentional mismatch as opposed to trying to make evenly matched fights. Charlo-Hogan and Davis-Gamboa are trash.

[QUOTE=Bob Haymon;20189423]You got some reading comprehension issues. That word is intentional not international.[/QUOTE] What's an intentional mismatch? Are there accidental mismatches? And how did Showtime prevent AJ vs. Wilder from happening when Wilder wasn't signed to Showtime?

[QUOTE=BennyBlanco;20189402]Do you even follow the sport of boxing???Showtime didn't block AJ-Wilder. Wilder and AJ made their own decisions. Showtime didn't have an exclusive deal with Wilder, so they couldn't have blocked him. What international mismatches has Showtime done lately? I…

[QUOTE=Crushinator;20183539]like the head of a network saying they care about boxing and the best facing the best, but only really caring if he can make it for his network, otherwise blocking it. and since his network offer less money for…

[QUOTE=BennyBlanco;20189369]When did Espinoza mention Davis? Look at the quotes. He didn't say Davis once. Espinoza is talking about wanting to have unbiased announcers. What's wrong with that? We all dislike biased announcers, and I think most people would agree that…