Showtime Responds To McGregor's Claim of Cutting His Mic

On Tuesday, UFC champion Conor McGregor was a very angry man, because he couldn’t respond to the verbal bombs that were being hurled by Floyd Mayweather Jr.

During the press conference at Staples Center in Los Angeles, McGregor’s microphone suddenly stopped working for reasons unknown, forcing the Irishman to yell at “Money May” the old fashioned way.

McGregor blamed Showtime and Team Mayweather for the malfunction at his own separate presser later in the day.

“They can do nothing after Aug. 26,” McGregor told reporters. They can try to do all these little tricks all they want. Aug. 26 this man will be unconscious. He’s too small. He’s too frail. That’s it, what more can I say?” 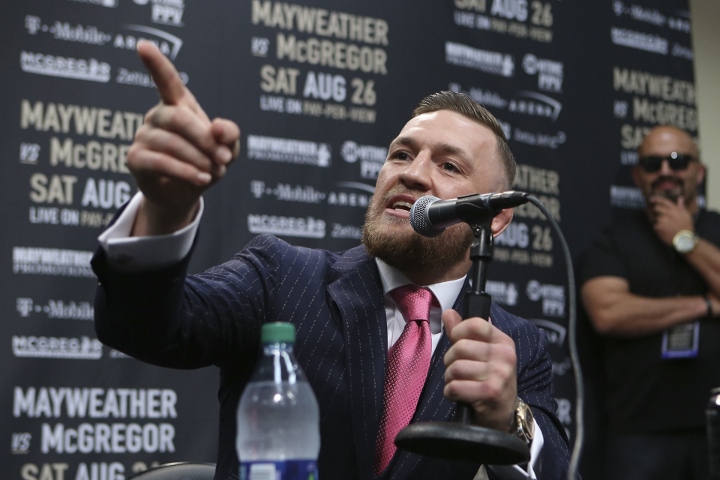 "At no point did SHOWTIME or Event Productions cut any microphones intentionally during Tuesday's kickoff event in Los Angeles."

"The point of this world tour is to let these superstars interact with each other. Cutting their mics would go against our goal of delivering these fighters to the masses and letting their charismatic and entertaining personalities take centre stage."

More than 11,000 fans crowded into Los Angeles's Staples Center for a raucous first live showdown between former boxing world champion Mayweather and Irishman McGregor, one of the biggest stars of mixed martial arts.

The two men are set to face each other in Las Vegas on August 26 in what could be the richest fight in history after finally agreeing to climb into a boxing ring following a year-long guessing game over whether they would ever do battle.

Tuesday's fiery face-off saw the swaggering, cocksure McGregor strut onto stage confidently in a three-piece suit featuring pinstripes made up of an offensive two-word insult.

The immaculately tailored profanity set the tone for a spectacle shot through with an endless torrent of abuse from both fighters, no doubt delighting promoters as they drum up hype for a bout which will demand $10,000 for ringside seats.

McGregor, who will start as an overwhelming underdog against one of the most accomplished defensive fighters in history, was bullish about his prospects of victory. "The 0 has got to go," McGregor declared, referring to Mayweather's perfect 49-0 record.

[QUOTE=ironmt;17853894]I meant popularity wise and sells when It comes to PPV. Other than the Mayweather/Pacquiao and Mayweather/Canelo fights does his PPV buys stack up with Floyd's?[/QUOTE] Overall? No.

[QUOTE=joseph5620;17853883]He's getting paid a lot more, his name is is the first one for the promotion, and it's a boxing match. Obviously he's the A side.[/QUOTE] I meant popularity wise and sells when It comes to PPV. Other than the…

[QUOTE=ironmt;17853878][B]Is Floyd the A side In this fight? I [/B]don't know much about Mcgregor but someone recently stated that Mcgregor does massive PPV sells. I don't do the UFC so I am not really Interested In reading about It to…

[QUOTE=THEFRESHBRAWLER;17853280]Floyd didn't get to talk while he was talking. He didn't even have a Mic. Conor and his fans been crying every since the fight was made...the gloves, the Mic, a real fight,etc.. This fight remind me of the Gatti…