When the Dillian Whyte-Dereck Chisora rematch was announced two months ago, it was presumed that DAZN would stream that fight live in the United States because that streaming service is aligned with Eddie Hearn, Whyte’s promoter.

BoxingScene.com has learned, however, that the Whyte-Chisora rematch will air live in the U.S. on Showtime on Saturday afternoon. That telecast is expected to begin at 5:30 p.m. ET/2:30 p.m. PT from O2 Arena in London.

Showtime’s surprising purchase of the rights to the Whyte-Chisora fight is sure to raise questions within the boxing industry regarding the broadcast/streaming home of Anthony Joshua’s next fight. If Whyte wins, he could challenge Joshua for his IBF, IBO, WBA and WBO heavyweight titles in the next fight for both British boxers. 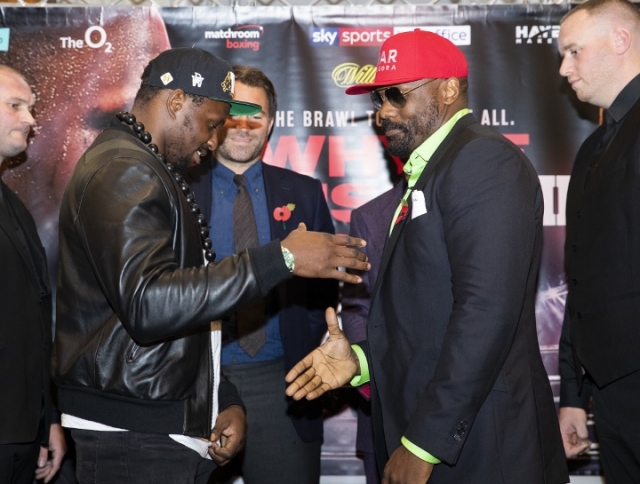 A second Joshua-Whyte fight was expected to take place April 13 at Wembley Stadium in London. As BoxingScene.com reported Monday, however, Hearn and Joshua now are considering Joshua fighting American Jarrell Miller next at Madison Square Garden, perhaps some time in June.

Joshua (22-0, 21 KOs) made his DAZN debut in the United States on September 22, when he knocked out former WBA champ Alexander Povetkin (34-2, 24 KOs) in the seventh round at Wembley Stadium. Securing the rights to stream a Joshua fight in the United States was commonly considered a strong start for DAZN, which officially launched its boxing programming that afternoon.

If Joshua and Hearn haven’t firmly committed to DAZN for Joshua’s next fight, it could enable Showtime and ESPN to bid on the broadcast rights to Joshua’s next fight. Showtime televised six straight Joshua title bout before DAZN streamed his fight versus Povetkin.

Sky Sports has an exclusive deal with Joshua and Hearn’s Matchroom Boxing to televise his fights on Sky Sports Box Office, Sky’s pay-per-view outlet, in the United Kingdom.

Meanwhile, the Whyte-Chisora rematch figures to be an all-action slugfest reminiscent of the “Fight of the Year” candidate they produced in December 2016. The Jamaican-born, London-based Whyte (24-1, 17 KOs) defeated Chisora (29-8, 21 KOs), another London resident raised in Zimbabwe, by split decision in that action-packed 12-rounder at Manchester Arena in Manchester, England.

Im more interested in Rosales-Edwards fight as undercard. Are they airing this bout?

[QUOTE=Motorcity Cobra;19369482]I think the executives at DAZN didn't understand the ins & outs of boxing. The politics. The alliances. They saw the success he had in the UK & thought he could replicate it here. If you don't follow the…

[QUOTE=Motorcity Cobra;19369482]I think the executives at DAZN didn't understand the ins & outs of boxing. The politics. The alliances. They saw the success he had in the UK & thought he could replicate it here. If you don't follow the…

[QUOTE=Scipio2009;19369318]What does the winner of the fight get were they not picked as Joshua's mandatory (or if, somehow, Usyk got paid enough to simply take the fight in April? The winner isn't mandatory by the WBC, WBA, IBF, or WBO…

[QUOTE=Scipio2009;19369216]So, in your understanding of the situation, Eddie Hearn got his alleged billion dollars over 8 years, for that Kansas nonsense? Pretty ridiculous, if you ask me.[/QUOTE] I think the executives at DAZN didn't understand the ins & outs of…