Now we have an answer as to how ready Top Rank’s matchmakers feel Shakur Stevenson is for a steep step up in competition.

According to an ESPN.com report Wednesday, a deal almost has been finalized for Stevenson to oppose Puerto Rico’s Christopher Diaz on April 20 at Madison Square Garden. The Stevenson-Diaz fight will be part of the Terence Crawford-Amir Khan undercard and will air as part of an ESPN Pay-Per-View telecast.

Stevenson (10-0, 6 KOs), a 2016 Olympic silver medalist, has taken some incremental steps up in competition since he turned pro in April 2017. The Newark, New Jersey, native has scored impressive knockout victories in each of his last two bouts, but Diaz is significantly better than those two opponents. 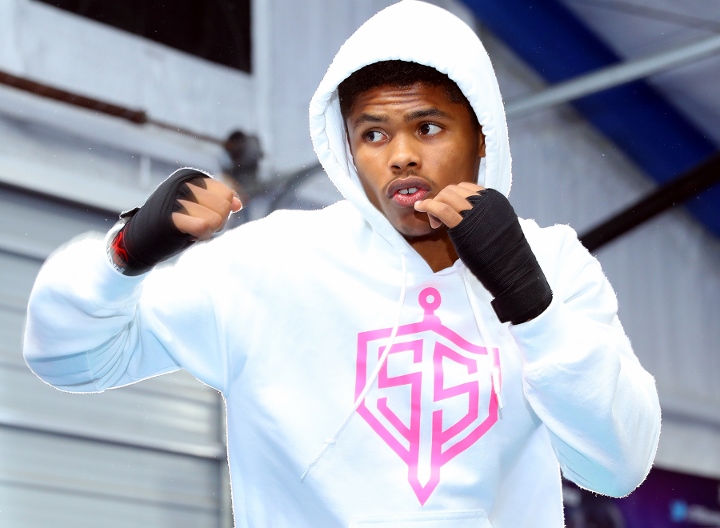 As good as Stevenson looked in those two bouts, Romania’s Viorel Simon (21-3, 9 KOs) and the Philippines’ Jessie Cris Rosales (22-2-1, 10 KOs) each entered fights versus Stevenson with better records than resumes.

Stevenson stopped Simon in the first round October 13 at CHI Health Center in Omaha, Nebraska. He beat Rosales by fourth-round TKO on January 18 at Turning Stone Resort & Casino in Verona, New York.

Facing Diaz in just his 11th professional fight is indicative of Stevenson’s ambition. The 21-year-old Stevenson repeatedly has expressed his desire to fight for a world title before the end of 2019.

In Diaz (24-1, 16 KOs), the young southpaw will encounter a boxer-puncher who this time a year ago was ascending toward his own world title shot.

Japan’s Masayuki Ito (25-1-1, 13 KOs) dropped Diaz in the fourth round of that championship match July 28 in Kissimmee, Florida, defeated Diaz by unanimous decision in their 12-rounder and captured the then-vacant WBO super featherweight title that had been vacated by Vasiliy Lomachenko. Diaz since has moved back down to the featherweight limit of 126 pounds.

Diaz, 24, had been tentatively scheduled to face former WBO super bantamweight champion Jessie Magdaleno (25-1, 18 KOs) on March 17 in The Theater at Madison Square Garden. He changed his mind when he was offered more money, per the ESPN.com report, to box Stevenson.

Stevenson, meanwhile, will head to camp with Crawford (34-0, 25 KOs), the WBO welterweight champion who has become a big brother and mentor of sorts to Stevenson. They’ll train together in Colorado Springs, Colorado, where a grueling strength and conditioning program has helped Stevenson develop more power prior to his last couple fights.

What UK TV station is it on?

Big step up. This is the first real fight for Stevenson. I was never a big fan of Diaz but he was heavily hyped and groomed to be the next PR star. Top Rank thought very highly of him and…

THIS is what you call a fighter willing to take a risk! There are many prospects, contenders, and champions and FEW right now are taking the risk that Stevenson is doing. Impressive!!

Diaz by KO, take notes people. Diaz is talented and is working with Roach with good sparrings and totally focus.

Them lips were just made for....